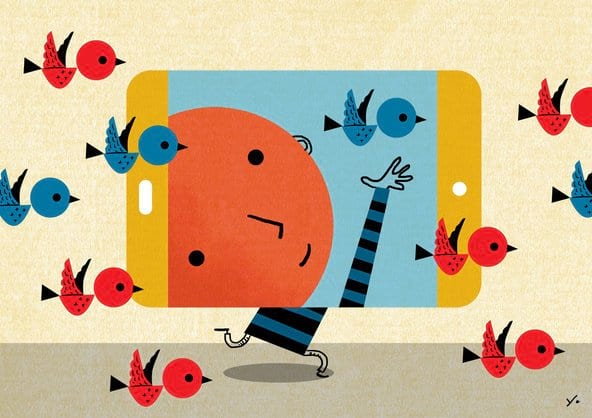 In To Siri, With Love, a collection of essays about the author’s son, Gus, who has autism, Judith Newman recognizes that the many conversations Gus has with an endlessly patient, non-judgmental and informative Siri, as well as his other use of tech devices, help him practice key skills that translate to developing real life relationships. “Like many autistic people I know,” Newman writes, “Gus feels that inanimate objects, while maybe not possessing souls, are still worthy of consideration.” It comes toward the end of the book, but it’s a powerful sentence that reveals (as does the book’s title) the fact that, for many families of children with special needs, kids’ screen time has a more nuanced role than for families with typical children.

But how nuanced is it? With plenty of evidence to the negative effects of too much screen time on kids (both young and older), there is a good case for strong boundaries. But, when there can be such marked benefits, where is that line?

Pediatrician Dr. Jenny Radesky, a fellow of the American Academy of Pediatrics, has some suggestions. Screen time management for children with autism and ADHD is a matter of shaping their digital device use in an intentional way, so they get the benefits, while avoiding the negative effects. Screen time that is used to soothe, distract, or escape (particularly in a behavioural pattern at the cost of developmentally helpful activities — a ‘rabbit hole’ so to speak) is to be discouraged and avoided; screen time that reinforces real-life skills can be encouraged.

While autism spectrum disorder or attention-deficit/hyperactivity disorder (ADHD) are very different conditions, she notes, they manifest in certain, similar ways that nudge kids on the spectrum or with ADHD toward dependency on digital devices earlier in childhood than their typically developing peers. Kids with autism or ADHD share “difficulties with executive functioning, rigid thinking, self-regulation and sensory symptoms,” she writes, and screen time can encroach on critical social interaction or skill-building play.

“Yet, digital devices can serve as important tools when used as a communication device, visual schedule, platform for creating social stories or immediate behavioral reinforcer,” Radesky writes. “Furthermore, many children with ADHD or autism have a comorbid learning disability in which keyboarding or audiobooks are extremely helpful.”

Ultimately, the real takeaway remains the same for typical and atypical kids’ screen time alike: The primary way to keep digital media use from being harmful is for parents and caregivers to actively engage with the child during screen time.

“Be aware that even though a child looks ‘focused’ on a mobile device, the gamified features (visual and sound effects, rewards) are entraining (sic) the child’s attention; the child’s brain doesn’t actually have to do the work to sustain attention. Instead, engage the child in multistep, hands-on activities or unstructured play to challenge his brain to sustain focus and complete a task,” Radesky notes, before offering tips on how to do just that for kids with autism and ADHD:

Radesky’s descriptions of unintentional, reactionary screen time are all too familiar for parents: “the intense, fussy toddler whose parents calm him down with a tablet; school-age children with ADHD whose preference for videogaming starts to displace physical activity, sleep or homework; or anxious youngsters who have nightmares after seeing a frightening YouTube video.”

Radesky recommends avoiding screen time as a crutch for calming, but rather as a way to positively reinforce real-life behaviors and skills they’ve been working to develop. One way to do this is to limit actual time spent using digital media: say, allowing 30 minutes per day of screen time, and adding 10 to 30 additional minutes to reward a skill the child has been practicing (e.g. expressing emotions through words).

Don’t forget, enforcing time limits is as important as setting them. “Most children with ADHD or ASD respond better to visual prompts rather than verbal reminders (usually yelled from another room!),” Radesky notes, suggesting parents use visual timers to manage device use.

Use the media experience to build skills further.

Beloved media characters can be used for learning beyond whatever lesson an individual episode tries to impart. This is where parental/caregiver interaction is key: If your child is really into Thomas the Train videos or books, Radesky suggests, ask the child questions about the characters that make the child exercise skills like counting, color recognition or emotion recognition; or if they love Paw Patrol, watch it together and then make-believe you both are different characters.

Radesky also recommends selecting media that will give or children with autism or ADHD the opportunity to build the specific skills they’re working on. For instance, for children with autism who exhibit echolalia (quoting scripted speech), Radesky suggests programming with nonverbal characters, like Pingu or Curious George.

Finally, she says, if you don’t like the way your child behaves after watching a show, take it out of their media rotation.

If children know devices can be used for more than simply streaming videos, or only playing games, they may be less likely to fall into the ‘rabbit hole.’ Radesky suggests installing creative apps — like stop-motion animation or simple coding apps — as well as biofeedback or relaxation apps that can help children learn self-regulation skills during screen time.

This diversification can be difficult. As Radesky notes, “kids with ADHD or ASD have difficulties with flexible thinking; they tend to get stuck on favorite things and can be demanding negotiators.” She suggests easing kids into new videos, apps and games by watching or taking turns playing the media with them.

“Some children with ASD or ADHD seek the sensory stimulation and emotional arousal of vividly dramatic violence, but they often lack the emotional maturity to understand what they are seeing and the interpersonal or societal implications,” Radesky explains. Which means violent content at best is avoided and, at least, should be explained by a parent to help the child process what they are seeing.

Finally, Radesky discourages multiplayer online video games, which offer a more comfortable form of interaction for some children with less developed social skills, out of concern for children’s safety and privacy.