What Bollywood Family Movies Taught Us about Parenting Whether it’s the fact that dancing will solve everything, or that a life without exotic locales is worth nothing, Bollywood has the right messages to guide us in all our endeavors – including parenthood. These are the parenting lessons we took away from each movie.

What Bollywood family movies taught us about parenting This movie rightly made squillions of rupees at the box office. It’s completely feminist — why should women not be allowed to wrestle?! — and completely Indian, too — fathers must dictate the flow of children’s lives, sartorial choices and futures; Daddy knows best, after all!

Oh, and a husband should totally override his wife’s objections when it comes to their kids. Forcing children up at the crack of dawn to train is good for them! And anyway, daughters don’t know what they want (women rarely do). So, put pressure on your kids to win big; they’ll need the championship money to pay for the many hours of therapy.

If the kid’s in anguish, Feminist Dad will find a therapist who runs. This movie exemplifies the best Indian belief: Our elders know everything. EVERYTHING. Put us in charge of life, and within a few years, the child will try to run away and change their name. What fun it is, to be a parent — hunting the kids down and dragging them back – again and again!

Also, we know now that if anything happens to a son, it’s totally his wife’s fault. And take note: Adopted children are not as good as real ones (you probably already knew that, but we didn’t). And, oh yeah, the only way to interact with a woman older than 22 is to constantly ask her when she’s getting married. Then just, like, throw unsuitable men at her.

Grandmothers abuse adopted children to toughen them up for life! Oh, these Bollywood parents are our jam! Kid not studying well at school? Teacher is constantly shaming him (rightly so) and telling you he’s no good (the lazy bum)? Got an older kid you’re prouder of, to whom you can compare the younger son, constantly? You, our fellow parent, are aces in our book. You can now shame the kid for his inability to learn and, if he doesn’t shape up, send him away to boarding school as punishment.

But you’ve got to select the boarding school carefully, else your kids will get on drugs there — to quiet the “voices in his head” (Please. Why can’t these voices remember exam answers?) — and blame you. So, make sure the school is draconian in its approach. This would be one of the most hilarious parenting fails — if it weren’t such a raging parenting success!

Boarding school is always the answer to anything your child does. Literally, anything. The Indian remake of Mrs Doubtfire fared very well at the box office – and why not? It’s Indian tradition to ignore what’s in front of you (aka your wife and child), only to want it back the minute it’s gone. And what better way to do that than by cross-dressing as an older aunty-type and doing household chores? (When you wear women’s clothes, you magically become good at housework. It’s science. Bonus points if you can make an elderly male member of the family fall for you, you sexy thing.)

But remember – between chores, and your job, and seducing a grandfather, while also feeling up mum and recommending yourself (without drag, don’t forget that part), and adjusting yourself in a sari – whatshername, your daughter (or was it a boy? Or was that the neighbour’s kid?) totally comes first! It is all about loving your parents, isn’t it? And that love brings parents such joy. But not more joy than the joy you feel when you force your kid to make a decision that you like, and they hate.

Bonus points when that decision is about marriage! Because marriage is serious business. Kids should always marry for money – that way, even if they split, you’ll still have money (from the settlement) and you’ll be happy (even if they’re not). If  the kids marry for love, what will you get after their divorce? (Hint: not much.) Please. Youngsters today know nothing.

Also, knowing which fork to use pretty much determines how perfect that person is.

Don’t speak to kids who have their own ideas; it will teach them ideas are for parents only. The best thing ever is when you have a conflict of interest – you can mix everything up and manage multiple lives to your satisfaction. Like in this movie, in which Amitabh Bachchan is a school principal with a daughter – and had the foresight to ban love, as a concept, even before his daughter fell in love with some ass from the school. And despite his daughter being a weakling and killing herself, he doesn’t bend; he continues to ban love through successive generations at the school.

So, when in doubt, ask yourself – WWABD? (What Would Amitabh Bachchan Do?) Is your kid rebelling? WWABD? Bring out the pistol and disappointment. Is your kid saying they’re depressed? (WWABD?) Bring out the ethics and Prozac.

It’s only bad parenting when you’re not setting standards that are impossibly high or robotic. It’s totally normal to have your 8-year-old kid pick out your clothes – especially if you’re a widower or a widow. Haha, just kidding, no woman would ever trust an 8-year-old’s fashion sense. Also, if a widower has to be both mum and dad to his daughter, why can’t his daughter be daughter and… well, anyway.

It also makes complete sense to leave the destiny of entire families to an 8-year-old, because adults clearly have better things to do. If your daughter manages to get you a second wife, consider turning it into a business and open a matchmaking bureau. You’ll make money, and your daughter’s future daddy issues and low self-esteem won’t matter – she’ll have the skills to find herself a husband!

Even 8-year-olds know only women in saris are hot and marry-able. 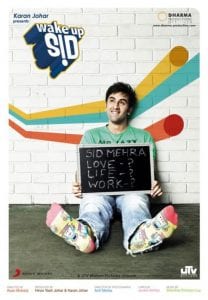 Marksheets and future career options are always gold with stubborn teenagers. Force them to make a choice and every time they do, tell them it’s the wrong one – it’s just too easy when the protagonist is a college guy who doesn’t study, fights with his dad, has no life plan and falls for an older woman, letting her support him till he figures it out.

This is pretty much the dream for all parents – to get your kid out of the house around college-age (when they get really irritating), ensure that they’re OK, live it up for a few months — and then invite the kid back when you’re bored. Bonus move: play good cop, bad cop – so one of you can still keep the channels of communication ‘open.’ All the parents in this movie, as well as the Director of the college, are our role models. The couple who is determined to make their son an engineer even though he wants to be a photographer, the family that puts so much pressure on their kid to succeed that he’s hyperaware of it every second of every day – all good parenting right there.

And the Director! Wow. What an inspiration. He expects students to fit into brick-and-mortar. He preaches the same principles of teaching/ parenting/ pressure, even after suffering personal loss because of them. In-effing-tegrity.

Also, the Dean is permanently on our Hot List because of his stiff upper lip and lack of emotion. Ssssexy.

Flexibility and exceptions are for losers. Winners always blackmail. Speaking of blackmail, this movie showed us how you can blackmail your offspring into giving you control of their whole lives, in exchange for a temporary something they’re dying for. Like, a trip to Europe in exchange for going back to Hicksville. Make memories not hopes, is the name of the game.

Because, if you’re born Indian, even if in London, you can only marry another Indian from the motherland, one selected when you were a child. This way, you can re-integrate into the culture in which you’ve never actually lived, be-family the people you’re seeing for the first time in yonks, and adopt the patriarchal rules that you ignored till now. Perfectly logical.

What? Find another Indian born in London? Don’t be ridiculous; that would take too much effort.

Hooray! We’re all Bollywood parenting masters, now. As, dear reader, are you.

(For anyone who hasn’t caught on yet, this whole post is #sarcasm)