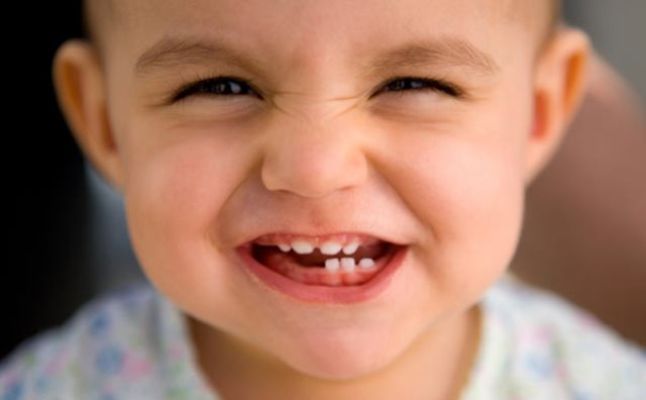 It’s a common enough scenario: Your baby wakes in the middle of the night. To get her to go back to sleep, you give her a boob or a bottle of formula, milk or juice. She calms down, and you all get on with your dreams. Feeding a baby at night like that might seem a natural solution, but there’s just one problem: It could be ruining your child’s baby teeth, says Dr. Nirali Mehta Ajmera and Dr. Shalini Pradhan, pediatric dentists with Pradhan Dental Centre in Mumbai, who talked to us about tooth decay in children.

How feeding a baby at night affects baby teeth

More accurately, it’s not brushing the baby’s teeth afterward that is ruining your child’s teeth. It’s understandable why parents skip the mid-night teeth brush – it defeats the purpose of soothing them with a feed in the first place.

But baby teeth, which start appearing at around six months, are more prone to decay than permanent teeth. Their enamel – that hard, white coating – is thinner and more easily eroded by the acid that results when food sugars mix with mouth bacteria. When you give a baby a bottle in the middle of the night and don’t brush afterwards, her mouth literally turns into a swamp of teeth-rotting acid for hours, hastening tooth decay in children.

This is true whether that bottle contains breast milk or formula, cow’s milk or juice, all of which are high in sugar. (Cow’s milk has the lowest sugar content – Feeding a baby at night; then breastmilk, at roughly Feeding a baby at night; formula, at 8g of sugar per 100g; and then unsweetened apple juice, which, at 10g sugar per 100g, has almost the same sugar content as a Coke; sweetened apple juice and other juices contain even more sugar.)

In fact, there’s a strong children’s dental health argument to be made that, after one year, when babies are able to get all the nutrition they need from food, they should no longer have breast milk or formula even as a snack – and certainly not juice.

“It is not only about the quantity of sugar but also the frequency of exposure to it,” Dr. Mehta Ajmera says.

The more frequently your child drinks these liquids, the more frequently his teeth are under attack. And bottles (or nursing), which allow liquid to pool in the mouth, also prolong baby teeth’s exposure to eroding acid. Dr. Pradhan advises parents to use sippy cups as early as possible to minimize this exposure.

Also, after your pediatrician says it’s OK for the baby to start drinking water, offer that as the mid-night drink rather than any drink with sugar.

Why does it matter?

It’s a good question. Baby teeth eventually fall out to make room for permanent teeth – so does it really matter if there’s some damage along the way?

Aside from the risk of serious infection, children’s dental health is important because baby teeth are placeholders for permanent teeth, which typically start to come in around age 6. If infected baby teeth fall out or are pulled too soon, the child will continue to grow without these spacesavers and may not have enough jaw room for their permanent teeth later. Damaged or lost teeth can also lead to speech difficulties and problems swallowing.

What to do after feeding a baby at night

Babies who are old enough to be sprouting teeth don’t actually require sustenance in the middle of the night, so you should feel perfectly fine to stop feeding baby at night; there’s no reason to be feeding them milk or formula when they wake up. But if you are keeping nighttime feeds available for the purposes of soothing your child back to sleep, you should at least try to mitigate the negative effects of that feed on his teeth.

The one thing that can counteract the dental damage of feeding a baby at night is brushing baby teeth, and it has to start – two times a day and after any nighttime feed – as soon as the baby shows signs of baby teeth.

And how you brush your baby’s teeth is as important as how frequently, Dr. Mehta Ajmera says.

“Brushing is not effective, is what we have seen,” she says. “This is because [the] brushing method is also not correct in most kids.”

Dr. Mehta Ajmera advises using a small-headed brush with soft bristles, and a tiny smear of toothpaste, for brushing baby teeth. Brush gently on the front and back of each tooth as well as the tongue. Only rinse if your child is old enough to swish and spit on his own. And finally, don’t forget to take him for dentist check-ups every six months, to make sure his smile stays strong.