The Power of the Question 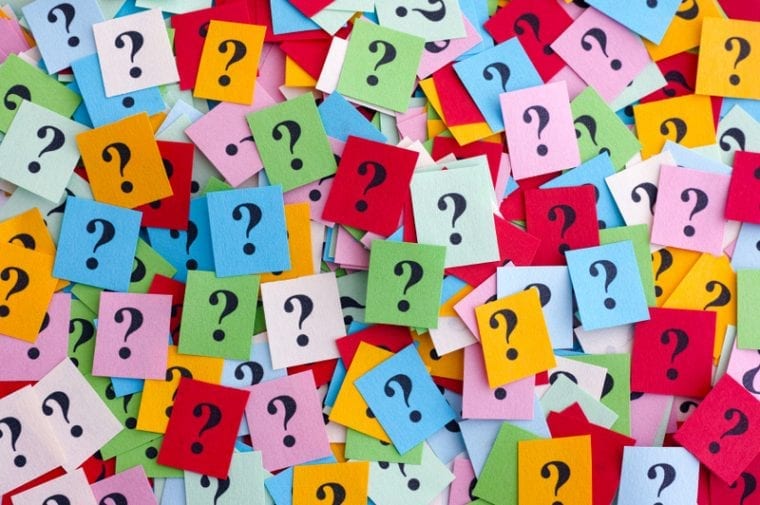 What is a question? Why do kids ask questions? What is the importance of curiosity?

Questions appear almost in tandem with the ability to speak and multiply as quickly as children grow – if not more quickly. “What is?” and “Can I?” in early toddlerhood swiftly morph into “Why?” and “How?” by the preschool years, by which age kids are asking around 100 questions a day (though it might seem like more).

“‘Why are the trees raining?’” recounts Dr. Candice Mills, whose 2-and-a-half-year-old son asked her that during a recent thunderstorm.

Mills recalls feeling momentarily baffled. “He was clearly coming at it from a different perspective than me,” she says.

But she had the benefit of understanding why he was asking, even if it took her a beat to grasp what he wanted to know. Mills is an associate professor of psychological science and the director of the ThinkLab at the University of Texas, Dallas. The ThinkLab studies how children and adults think about the world around them, and much of Mills’ research has focused on answering: Why do kids ask questions?

What is a question?

Mills speaks of questions as tools children use to obtain information and construct their understanding of the world, much as a carpenter builds a house.

Of course, like a carpenter, children have more than one tool in their box. Mills says children often use observation to reach conclusions, and later on, inference. As they grow older, they gain the ability to look up information for themselves.

“The power of questions, though, is that children can easily use them from a very young age to gather information from others when they are unable to do so themselves,” she says. “And for so much of what children learn about the world, from understanding scientific concepts to recognizing the reasons underlying religious and cultural rituals to a whole host of other things, children cannot find the answers without help from others.”

The unique utility of questions to learning is now being scientifically proven by Mills and others. Yet it has long been sensed by philosophers and educators. The simplistic perfection of the question as a tool means it has been in use for millennia, perhaps since the dawn of Homo sapiens; certainly since the era of classical Greece, when Socrates developed his eponymous inquiry-based philosophy of education.

Yet questions are remarkably complex. Mills refers to the brain functions involved in crafting a question – speech, memory, reflection, big-picture thinking, inhibition – rather than a specific process of asking.

Perhaps, then, it’s better, clearer, to study the force that wields them – just like Newton didn’t look to the apple for an explanation, but to the invisible tug that pulled it to the ground. The force behind the swing of the question that drives home the underpinnings of understanding: Curiosity.

The neuroscience of curiosity

Curiosity, specifically perceptual curiosity, is behind most questions young children ask. Perceptual curiosity is a drive for novel stimuli and it appears to be hardwired into us as children, though it fades the longer we are exposed to an object, idea or world. Perceptual curiosity (and its cousin, epistemic curiosity, the drive for knowledge and understanding, which is less understood though thought to develop in early childhood) is linked to an area of the brain called the cingulate cortex, which fires up when information doesn’t jive – leading a person to resolve their dissatisfaction either by ignoring the dissonance or by becoming curious.

What is clear is that becoming curious provides a reward that ignoring dissonance can’t. Researchers at the University of Colorado, Boulder, have shown that the relief of perceptual curiosity activates regions of the striatum, a part of the brain linked to reward-processing, and regions of the hippocampus responsible for converting short-term memory into long-term memory.

Even more remarkable, however, are subsequent findings by a team at the University of California, Davis. Using brain imaging during a series of questions, half of which interested participants, the team found that the same regions activated even before subjects saw the answer, suggesting the brain rewards anticipation of an answer – or, the act of curiosity itself.

As the Scientific American article that first reported these findings put it: Curiosity primes the brain for learning by rewarding new knowledge and making sure the brain retains it.

“It’s like an itch that you have to scratch,” said neuroscientist Charan Ranganath, one of the authors of the UC-Davis study, to Scientific American. “It’s not really pleasant.”

Using the skill of inquiry

But having the force and the tool doesn’t mean wielding either effectively. Such is the philosophy behind the Right Question Institute, a US-based non-profit. Questioning may be natural, but inquiry is strategic, says Andrew Minigan, the Institute’s Education Project and Research Coordinator. The Institute works with voters, parents, teachers and children to teach effective questioning through a five-step process: posing, refining, prioritizing, asking, and reflecting on questions.

It’s during the refining step that kids learn asking the same question in a different way can yield more or less, better or worse information.

While the stepwise process is helpful for anyone, Minigan says, the earlier they begin to use the strategy, the more of a habit it can become – and the more effective and comfortable they can be in building their knowledge. It’s a self-perpetuating cycle: When students are allowed and enabled to ask their own questions, “they’re more curious,” he says. And, unsurprisingly, they learn more deeply.

“An emphasis on critical thinking and 21st century skills — and the workplace moving away from automated jobs — has placed a new importance on inquiry skills,” Minigan says. “Although it hasn’t been taught traditionally, educators around the world are now leading the way and doing magnificent work teaching students how to ask and use their own questions.”

One of those educators is John Smithies, principal of the American School of Bombay, which uses inquiry-based pedagogy to guide students’ lessons, an endeavour he describes as “messy.”

“We have this idea that education is opening a lid and pouring in, but it’s not,” he says.

For Smithies, encouraging questioning in the classroom serves two purposes: First, it allows children to access information that is relevant – and thus, more usable. And second, it develops their resilience to keep pursuing it.

“If you (a student) come to me with a question that’s not very well formed or thought through or deep, I might push back a little bit and ask you to rethink that question, think more broadly,” he says. “Questions teach you to learn to struggle. If you ask good questions, it’s not always easy to find the answers. You have to keep going back to the drawing board.”

Questions, curiosity, inquiry may be world-building stuff, but it’s also common, everyday – banal, even – perhaps only notable in its absence; studies of children in high-risk environments show that less exposure to question-and-answer exchanges correlates with difficulty in school. Which suggests that the interaction of questioning – not just the asking, but also the receiving an answer– is just as critical to learning.

But just like questions, some answers are better than others. To what degree weak explanations affect children’s interest in learning is unclear (it’s something Mills’ ThinkLab is currently studying), but any answer is better than none, Mills says.

And your child has just discovered something about physics.

In fact, perhaps the most important thing that parents can do to encourage questions is to model inquisitiveness themselves.

Asking our own questions models “that it’s OK not to know things,” Mills says. Plus, they are sometimes answers in themselves. Mills’ research has found that preschoolers are able to listen to question-and-answer interactions between others and apply the overheard information to solve problems set before them.

The trick is, as parents, to keep questioning alive as a means of discovery. If preschoolers start by asking parents 100 questions a day, by middle school they’ve all but stopped, according to a 2010 Newsweek report whose title, “The Creativity Crisis,” hints at the consequences of such a decline: