Lessons in Small Print: What Lies Beneath 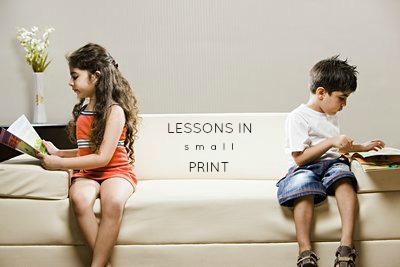 Picture the peculiar, eerie desolation of a dry, flat desert. This is the blistering hot bleakness, the gritty abyss, painted masterfully by Louis Sachar, that sucks readers in within the first page of Holes.

Climax and anti-climax weave powerfully in this story for kids, which came recommended to us by two of the children in the club. They wanted to discuss the dark humour behind the book’s themes: responsibility and redemption, serendipity and survival.

The episodic plot, which spans three generations, is imaginative and inventive, if just a bit convoluted in parts. Stanley Yelnats is a boy from a poor family under a curse, the secret behind which unravels gradually. For Stanley, it manifests in his unjust conviction for a crime he didn’t commit (stealing a basketball champ’s shoes from the celebrity auction). The judge offers Stanley a choice: go to jail or to Camp Green Lake. Never before able to afford any kind of camp, Stanley accepts the lighter-sounding sentence—only to discover there is much more lurking under the surface of Camp Green Lake than anyone dreams. 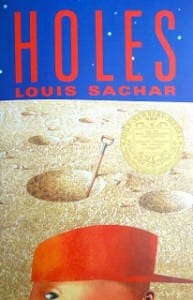 Forced to “build character” in this wasteland by digging holes five feet wide and five feet deep, the detained boys don’t know that they are actually looking for something for their treacherous warden. She is a fearful character who mixes rattlesnake poison into her red nail polish, and then threatens to scratch the scared wards.

Our book clubbers became engrossed when Stanley starts out on a search of his own—for the truth. Stanley – a friendless loner who sees himself as awkward and purposeless – is all too relatable for preteens and teenagers. He finds himself, through the hardships he is forced to face, in the arid, hostile desert shared with bullying boys and lethal lizards. As Sachar said of his protagonist in an interview, “He is a kid who isn’t a hero, but he lifts himself up and becomes one. I think readers can imagine themselves rising with Stanley.”

The children equally enjoyed learning about the creative process behind Holes. This story for kids, which has won 16 awards, took the author eighteen months to write—exactly the duration of Stanley’s sentence at Camp Green Lake. The book clubbers appreciated Sachar’s writing style, which resembles the abbreviated conversation style  that their generation shows an affinity for; denser, descriptive prose – as in Eva Ibbotson’s Journey to the River Sea, Natalie Babbitt’s Tuck Everlasting, Ellen Potter’s Kneebone Boy and R.L. Stevenson’s classic The Strange Case of Dr. Jekyll and Mr. Hyde – seems hopelessly lost on them. (“Why do they write so much?” they protest.)

Holes also offers the chance to introduce literary terms and devices such as palindrome (in Stanley Yelnats’ name), magical realism, and irony. It also got our imaginations going; the kids condemned to Camp Green Lake cook up quirky nicknames for each other, like Zigzag, Magnet, Armpit, Zero, Barf Bag and X-ray, and our book clubbers were quick to dub each other. Fortunately, their nicknames were gentler!

Holes also prompted introspection. We asked the children to describe a situation in which they had struggled, survived, and discovered strength that lay beneath the surface. One boy recounted an act of faith, when – frustrated, dehydrated and fatigued – he almost passed out in the heat, waiting with long lines of devotees thronging Amritsar’s Golden Temple. Determined to stay the course, he was rewarded inside the sanctum sanctorum with moments of peace that he still recalls in restless times.

After a series of menacing twists and turns, the plot of Holes eases into a more languid pace with chapters of light adventure. Through his adventures, Stanley learns the truths he set out to find: he resolves the mysteries of the holes, learns about the drought that destroyed Green Lake, and discovers the story behind the legend of Kissing Kate Barlow, an infamous outlaw.

In the end, the book’s offbeat humour made it all the more touching and relatable for our readers. “Sometimes when I start reading,” Sachar said in an interview, “people aren’t sure if it is humorous or not, whether to laugh at first, and then gradually they start laughing.”