“I thought this was a book for my little brother when Flipkart delivered it,” said one girl. “Then I peered closer and saw our title there!”

“That’s what they say—never judge a book by its cover,” offered a boy beside her. 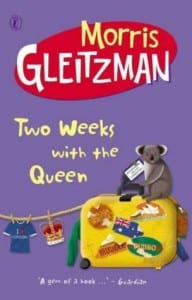 Moira Millman’s colourful cover illustration for Two Weeks with the Queen, which shows a koala bear atop a Buckingham Palace-bound suitcase (next to a recommendation for 8+), does make it seem a junior read. But it isn’t. And that’s what most strongly struck our 11- to 14-year-old book clubbers.

We choose books for our young readers after careful deliberation, and the deceptive jacket artwork didn’t throw us off. Here’s what attracted us – and the kids – to Morris Gleitzman’s Two Weeks with the Queen. In their words:

Far from the carefree tale the title implies, the book presents themes of terminal illnesses, like cancer and AIDS, and death in a tender-tough tone that is just right for children. We follow the travails and triumphs of Colin Mudford, an Australian boy who goes to England seeking help from the Queen in order to find the best treatment for his younger brother, Luke, who has cancer. Gleitzman is exceptionally talented at lacing touches of humour throughout the text, which saves it from a too-dark fate.

We were surprised to learn that the children appreciated the book’s pragmatism and unflinching reality. While some confessed to getting a bit bogged down by some typically Aussie expressions (like ‘sooky’ and ‘sticky-beaking’), the universality that make this a special story for kids quickly won them over. Most were relieved there was no neat tying up of events leading to an “untrue happy ending,” as they put it.

“It’s great how the author roots for children to be taken seriously.”

Dismissed by a string of adults who find his mission absurd, Colin becomes defensive and despairing, until his tenacity impels him to act. The children enjoyed the manner in which the writer illustrates Colin’s frustrations. For instance, Colin ponders whether “many doctors turn deaf from sticking their stethoscopes too far into their ears” when they ignore his questions about Luke’s prognosis.

“It’s fine to hate and love your sister or brother at the same time,” was another statement that reassured book clubbers. Colin and Luke have sibling rivalry coupled with a deep underlying affection. This thread in the book led the kids to swap frankly personal notes on the push and pull of such love-hate relationships in their lives.

“It’s okay to be gay, or different in any way, and this story shows that.”

The children loved the sensitivity with which the book discusses homosexual love. When Colin is sent to live with relatives in England, he approaches physicians at a nearby hospital in an attempt to get a cure for Luke. At the hospital, he meets Ted, a homosexual man caring for his partner, an AIDS patient. In a unique friendship, Colin and Ted support each other through moments as wrenching as Ted’s attack by homophobic thugs. The friendship allows Colin to emerge more resourceful and brave than he ever imagined he could be.

“It shows nothing is lost unless you lose hope.”

Brimming as much with the power of positive thinking as with the wisdom of accepting the lows of life, Two Weeks with the Queen tugs appealingly at kids. It syncs nicely with their natural ebullience. Readers of every age smile to hear Colin reason with himself as he sets off nervously on the flight to London: “If modern technology could do this, he thought, keep a plane bigger than Bayliss’s Department Store up in the air sixty thousand feet over Dubrovnik, it could cure cancer standing on its head.”

Starting with a quote from The Guardian critic’s review of the book – “Morris Gleitzman has a rare gift for writing very funny stories and an even rarer gift of wrapping very serious stories inside them” – Rupal and I assigned the group a challenging exercise: describe a moving or painful episode in a light writing style. The children were stumped. We offered them as much extra time as they needed and offered a few suggestions, too. But they simply could not go ahead with it. Already appreciative of an author who had told a wonderful story, their struggles left them awed by the inimitable skill it takes to weave pleasure with pain.