Is This Normal? “I Have a Compulsive Need to Read Spoilers” 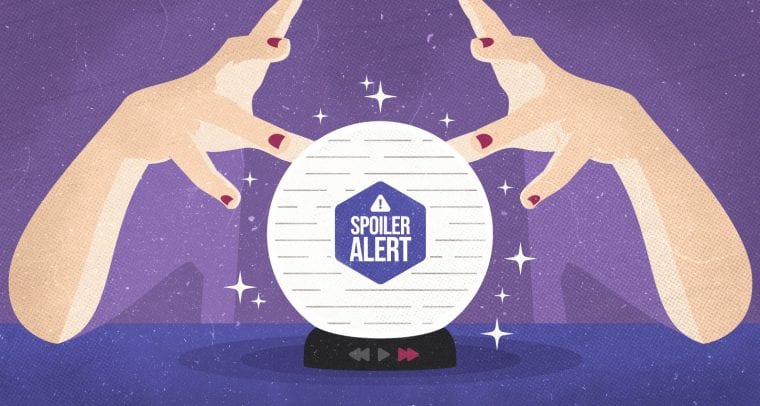 Before I watch any movie, and sometimes even certain episodes of TV shows, I follow an elaborate ritual to get ready. My laptop should be charged; my speakers should be connected; there should be as little light in the room as possible; a cup of green tea and something to munch should be at an arm’s reach; my phone should be on silent; and, I should have read the story and detailed synopsis of the narrative before I hit play.

This is especially true for horror movies (not my cup of tea) and thrillers (just another name for horror because they’re equally scary, in my opinion). As someone who scares very easy and hates surprises and the feeling of an adrenalin rush, I need to know who/what is causing a series of eerie and loudly violent things to happen as the story progresses — otherwise, I’m not even going to watch it, thank you very much. But I have also spent a considerable amount of time on Wikipedia, IMDB, and Rotten Tomatoes before watching the slow-paced Downton Abbey or the cheerful and predictable Moana. I knew Jack wasn’t going to fit on the plank in Titanic before I watched it just as I knew beforehand that Ayushmann Khurrana’s character is faking blindness for the most part in Andhadun. (Sorry!)

It does not take away from my viewing experience even one bit — if anything I enjoy myself even more. Without the weight of suspense about how a story will unfold or the One Tiny Detail the director/narrator is keeping from me until the very end, I feel free to truly enjoy the small moments of the film and focus on the small parts that lead up to the big reveal or climax.

In 2011, when Jonathan Leavitt and Nicholas Christenfeld from The University of California San Diego’s psychology department, set out to finally find out the truth about spoilers — by going around and spoiling a bunch of stories for more than 800 volunteers and then documenting their enjoyment levels — they found out that spoilers actually enhanced the viewing experience for people. This surprised them to the extent they repeated this experiment to double-check the results by spoiling stories across genres — mystery stories containing a “whodunit” moment, ironic twist stories, where a surprise ending crystallizes the whole story, and literary fiction with a neat resolution.

“Across all three genres, spoilers actually were enhancers,” the study’s report says. “The term is wrong.”

But if spoilers are in fact good, then how does one explain the thousands of people out there, who, at any given moment, are ready to shred apart anyone who dare tweet out a spoiler to the next Game of Thrones episode? Is aggressively not wanting to know spoilers normal?

Is This Normal? “I Don’t Know Where to Look When I’m Talking to Someone”

The short answer is: yes. Benjamin K. Johnson, an assistant professor of advertising at the University of Florida, and Judith E. Rosenbaum, an assistant professor of media studies at the University of Maine, have spent years studying how people perceive and receive spoilers. To this end, they’ve authored and published several papers on the factors that contribute to a person’s enjoyment of — or hatred for — spoilers and found they range from one’s brain’s processing speed to one’s preference for big emotions.

“What Ben and I are finding is that a lot of people’s reactions to spoilers depend on the circumstances. It’s not one-size-fits-all. We’ve published several papers that point to personality traits as a factor, for instance, or even the genre,” Rosenbaum told Vox. “We’ve found that when comedy is spoiled, it’s less enjoyable. But when fantasy is spoiled, it doesn’t seem to matter as much.”

One of the factors that determine whether or not a person will like spoilers is the person’s need to feel in control, according to a 2018 study by the duo. Sometimes when you give spoilers to someone who doesn’t want to hear it or isn’t expecting to, they might feel as if they’ve lost control over the process of watching/reading a story play out. In my case, however, a corollary applies. “On the other hand — and this is still speculation because we don’t have much evidence for it yet — people who seek out spoilers may do so because they want to feel as if they’re in control of their experience with the story,” Johnson told Vox. “People who don’t want to solve the mystery of the puzzle of the narrative but just want to know how it ends, those people are more likely to choose stories that are spoiled,” he adds.

They also found those who don’t like “big emotional experiences” were more likely to have a positive attitude toward spoilers, than those who liked them. I remember when the last Harry Potter book released, the first thing I did was flip to the end to make sure Harry, Ron and Hermione are alive and well. I, then, proceeded to enjoy reading about the Battle of Hogwarts immensely, feeling safe in the knowledge of the protagonists’ survival and victory. But, then, when Fred Weasley abruptly dies (!) — I was completely thrown off, and remember being unable to resume the book for a few days. The anxiety of not knowing what happens to the characters next can be very stressful for some (read: me) — spoilers, in such case, are a godsend. This is corroborated by a study by two other researchers, Morgan Ellithorpe and Sarah Brookes. They looked at the final episode of the TV series How I Met Your Mother and found that people who knew [ahead of time] what happened at the end felt less stressed watching the finale.

Rosenbaum and Johnson then jumped in and did a follow-up study in 2015. They found that especially when people are really invested in the characters’ lives, they’ll actively seek out a spoiler to make sure nothing bad happens to them or to prepare for a bad eventuality. They also found that certain habits also impact how people interact with spoilers. For instance, those who read fiction prefer their stories unspoiled; the fact that I like spoilers can then be linked to the fact I read non-fiction 80% of the time — I like stories around well-established facts; that’s what my brain is used to.

In yet another study from 2015, the Rosenbaum-Johnson duo proves my main rationale for seeking out spoilers. “Research has found that sometimes spoilers can increase what we call ‘processing fluency,’ which means that knowing what’s going to happen ahead of time makes it easier to make sense of the events that are actually taking place in the story,” Rosenbaum explains to Vox. “That can increase your enjoyment; if you know what’s going to happen in advance, you maybe have more time to think about what someone’s wearing or what they’re saying, or it lets you pay attention to a joke, for instance.” This is also why Fleabag is funnier and the Hot Priest is hotter the second time you watch the show.

The fact is all this anti-spoiler propaganda is only a very recent phenomenon. As recently as 1976, George Lucas explained the full plot of Star Wars in the New York Times — a year before the movie released. But with the explosive growth of the internet and social media, a spoiler travels much further than a newspaper’s reach. “We’re talking more to each other online about content. There are more reviews, and they’re more accessible. If I go into my social media news feed now, I’m seeing spoilers or reviews from TV shows that aired last night,” Johnson tells Vox.

As the number of choices for stories we can see or read with astounding ease increases, a prevailing fear has taken the shape of the question ‘what is the point of watching something if I already know what happens?’ And so, spoilerphobia has grown. This has further perpetuated a cycle: because people think spoilers are ‘bad,’ they approach them negatively now, the duo explains to Vox.

As for me — I’m not falling for the fear-mongering. Spoilers are my true friends: they calm my overthinking, overworked, sleep-deprived brain when I’m trying to unwind by watching a movie. I also may or may not have issues with giving up control. Whatever. The matrix isn’t real.

film and TV | Is This Normal? | Surprise Surprise