All The Arguments You Need: To Convince Doubters of Feminism 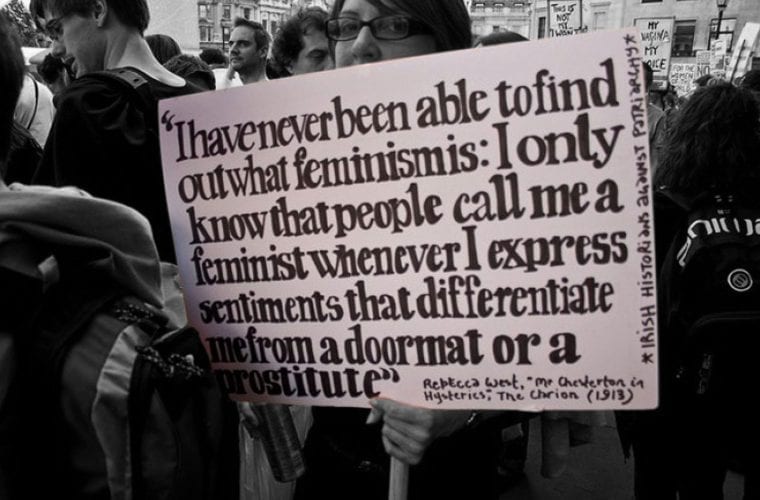 One of the most prominent aspects of my identity is that I am a feminist. To me, it is not only a personal belief, but also a political fight. When I identify myself as a feminist in social settings, I have noticed it almost serves as an invitation for sexists, doubters and Devil’s advocates to engage me in debates. They come armed with arguments against feminism consisting of myths, misunderstandings, and misconstructions.

I don’t have a problem participating in a discourse about feminism. It is only when we talk to those who are in the dark about the movement, those who are on the fence about it, and those who are on the other side of the line, that we can achieve the goal of gender equality. But, this involves, on my part, constant engagement and a burden to educate — nay, convince — people that the advocacy of social, economic and political equality of all genders is valid and logically grounded in statistics and experiential evidence. It is exhausting to have to draw constantly on my lived experiences and recollect relevant research — only to be met with straw-man arguments and a condescending “Why are you getting worked up?”

If you’ve ever been in my place, and have wished you had facts and hard data to debunk some of the more absurd arguments against feminism thrown at you, here’s a quick primer for the next time it happens (which, it will).

“Where is the inequality? Men and women are already equal.”

According to the United Nations, one in three women is beaten, forced into sex or abused by an intimate partner. On each day of 2017, 137 women were killed by a family member. Women and girls together account for 71% of all human trafficking. A woman is raped every 13 minutes in India.

These are violent, obvious manifestations of inequality. We can see more subtle sexism in the fact that women’s clothes aren’t designed for them, school textbooks still propagate sexist stereotypes, 131 million girls are out of school globally, 113 countries don’t have laws to ensure equal pay for equal work, the majority of women in the Indian workforce earn roughly Rs. 62 for every Rs. 100 that men earn, while doing 10 times more unpaid labor than men do — the list really does go on. And, that is a fact, too: According to the World Economic Forum’s most recent Global Gender Gap report, at the current rate of progress, it will take another 108 years to reach gender parity. So, no; men and women are not already equal.

This argument against feminism also resorts to the male-female binary, excluding transgender, gender-non-conforming and gender-fluid persons, which is simply the wrong way to go about discussing gender equality. On that front, too, we are lacking: Half of all transgender people are sexually abused at least once in their lifetime; 92% of the socio-economically challenged trans community cannot participate in India’s formal economy to this day. So, again, no; feminism is nowhere close to achieving its goal of equality. It’s going to take a minute.

“Women and men are biologically different, so how can they be equal?”

Sure, there are undeniable physiological differences between the two, but men and women don’t have different brains with different proclivities to certain vocations. Research has also found that men and women are essentially alike in terms of personality, cognitive ability, and leadership potential. Any difference between men and women is a part of socialization and not genetic coding.

So, women aren’t missing from STEM fields because they’re ‘natural caregivers.’ Their absence is more likely because of structural barriers such as unfair parental leave policies in the workplace, or the fact that 71% of women field researchers have received inappropriate sexual remarks and 26% have reported experiencing sexual assault.

“What about male problems like high suicide rates and false rape charges? Feminism is just sexist against men.”

Men’s significantly higher suicide rate is directly linked to the fact that they are far less likely than women to seek support for mental health problems. This is because they are brought up in a world in which they can’t express emotions freely on account of it being perceived as a feminine trait. Feminism seeks to retire all gender stereotypes and inequality, which would help everyone, regardless of sex and gender. This means issues such as violence against men will be taken more seriously because it will be divorced from the idea that masculinity means being invulnerable.

As for false rape accusations, approximately only 2% to 5% of all sexual assault accusations are false. That means, 98% of times, women are telling the truth. As unfortunate and illegal the cases of false charges may be, to expect feminists to drop the fight for equality is unreasonable and based only on the logically redundant argumentative technique: whataboutery.

Finally, feminism can’t be sexist towards men because of how oppression works. It has a unidirectional, systemic flow, from a group at the top that has social and cultural sanction to misuse power, toward the group at the bottom. Patriarchy hurts everyone — even men — but as long as men are in a greater position of social power that allows them to oppress women culturally, socially, legally and financially, they can’t be victims of sexism.

“Feminist women are so angry and aggressive. Why can’t they relax?”

Of course, we’re angry. We are conditioned from day one to conform to a certain norm of femininity. We get harassed on the streets. We get raped, abused and killed disproportionately. We don’t get equal access to education and opportunity as men get, and when we do, we don’t get paid as much as they do for the same job. Our reproductive rights are heavily regulated by men who conveniently dominate most decision-making roles. We are objectified and sexualized to the extent that entire multi-billion dollar industries, such as fashion and make-up, thrive on women’s insecurities. All of these drivers of inequality are exasperating and very personal, lived experiences for us. It’s not just an intellectual exercise for us to talk about these things repeatedly. So, of course, we’ll get angry sometimes, as people do. But feelings and fact are not mutually exclusive — yet another untruth patriarchy has given us. Feminist women having feelings does not negate the entire movement.

According to one study, asking women not to “make everything about feminism,” and insinuating that they are somehow overdoing it in demanding gender equality and respect, is itself a more recent manifestation of modern sexist behavior.

“If feminism cares about equality, why is it called feminism? Why not egalitarianism or human-ism?”

‘Humanism,’ it seems, has come up as an alternative simply because it sounds a little bit like feminism and, phonetically, it gives the sense that it might mean being in favor of all of humanity having equal rights. But that’s just misconception. Humanism is a branch of philosophy and ethics that says that the source of human morality isn’t God but humanity’s capacity to be logical and triumph over dogma. So… that’s why feminism isn’t called humanism.

Egalitarianism is a school of political thought that says that all human beings are fundamentally equal and therefore should have equal rights to all resources. Sure, in that regard, egalitarianism has informed feminism by being a broader view of the fight for equality. But egalitarianism has had its heyday and has been dormant as a social movement for a while now, and yet egalitarian laws and practices have not succeeded in elevating the position of women in society. This is why we need something more — why we need feminism.

Unlike egalitarianism, feminism is a social movement that is inherently about action; it’s about tackling the world as it is right now, in which one particular gender is being oppressed. If all goes well, hopefully, we will all be able to call ourselves egalitarians. But until then, we need something specific to solve the problem of wide-ranging discrimination against women and other gender identities.

Feminism got the name because it started as a socio-political movement advocating for women’s rights based on the premise that gender, specifically, is not an acceptable basis for discrimination or oppression. Through its own chain of reasoning, it has evolved into a movement for equal rights of all genders, which at no point takes away from any other human rights movement.

“I believe in equal rights of all genders but I don’t call myself a feminist.”

Too late. That’s literally the definition: You are a feminist.