A Chat With the Author of ‘Love And Marriage In Mumbai’ 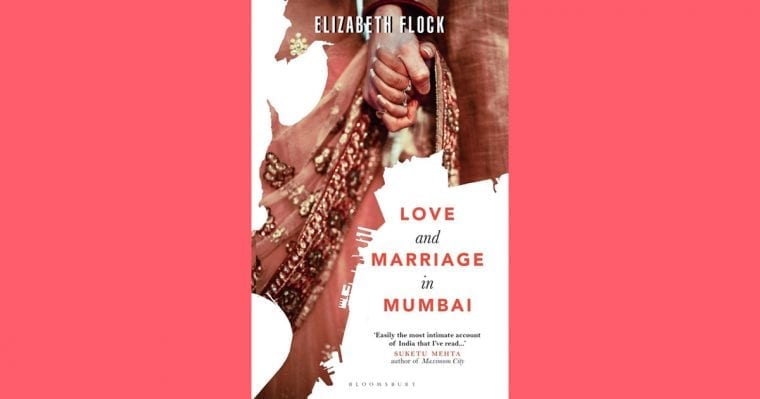 We sat down with Elizabeth Flock, author of Love and Marriage in Mumbai, a new book that encompasses a few of our favorite things: beautiful storytelling, conscientious reporting, and nuanced exploration of the institution of marriage. Elizabeth spent 10 years following the lives of three married couples in Mumbai; as a friend and confidante to these couples, she gained an intimate view of their love stories, their struggles, their secrets, and their evolutions as couples and individuals. What emerged is a unique perspective on the universality of love and relationships — and the sometimes overpowering influence of culture on individual lives. Below is our conversation with her, edited very slightly for clarity.

THE SWADDLE: One of the incredible things about these portraits of marriage is the level of intimacy you’re able to portray. Why do you think these couples talked to you about things they couldn’t discuss with their own families, friends, or even spouses?

Elizabeth Flock, author of Love and Marriage in Mumbai: I think I gained trust over time. This book took me 10 years to finish from the time I met these couples, and I kept coming back to them. That helped. But their reasons for talking to me differed from person to person. For Shahzad, for example, I think he talked to me about his inability to have children in large part because he didn’t have others to talk to about it. Therapy is still very stigmatized even in Mumbai. And there was so much judgement from his larger community.

Obviously, I’m not a trained therapist, but I tried my best as a journalist and as a human to listen to him and to all the couples without judgment, and to tell their stories without judgment. Also, all names were changed to protect their anonymity and privacy, which I think helped people feel more comfortable with sharing intimate details.

THE SWADDLE: You must have felt a level of sensitivity around the fact that you, a white American woman, were an outsider to this culture. Did you think about that while you were interviewing, and how did it drive your approach to storytelling?

EF: I was really conscious that there have been a lot of very bad books written about India by foreigners. White writers love to exoticize, romanticize, or pity India, or at the very least, portray it without nuance despite India’s insane diversity in every sense of the word. So, I tried really hard to fight against that. That’s in part why I wanted to take this really narrow lens and just write about three couples instead of trying to tell the whole story of love and marriage in India right now. And that’s also why I left myself out of the story and wrote this book in the third person — because I wanted the couples to explain what was changing in India, not me as some omniscient white narrator.

But I’m also aware that it comes with a certain amount of privilege for me to be able to come to India and do this book. And I’m sure I didn’t get everything right. That said, I do think outsiders can sometimes provide a unique perspective that those on the inside can’t.

And separately, I do believe many of the problems and joys of love and marriage are universal no matter where you live.

THE SWADDLE: Why did you choose this subject? What was it about the couples that you met, or about Mumbai, that made you think, “I have to write this story”?

EF: I feel as if I didn’t really choose this subject, but it chose me. I came to Mumbai on the heels of my father’s third divorce and I think I was pretty desperate for some answers about why marriages work or fail. And the couples I met provided some of those answers. A lot of folks have asked why I studied Indian marriages instead of Americans ones. I think it’s in part because I met these couples in India at the right moment, but I also, as I spent more time as a journalist, became really interested in how social and cultural change in India was placing pressure on couples, on marriages. That was something I saw play out in the couples I met and wanted to explore further. So I suppose the interest was both personal and sociological.

These couples’ stories were also ones I couldn’t stop thinking about over the years, so finally I knew I had to do this book. People always say write what obsesses you, and I think that’s really true.

THE SWADDLE: It must have gotten awkward — knowing about the deepest dysfunction in these relationships, or secrets between spouses, while living under their roofs. What was the most awkward or delicate situation you encountered?

EF: I suppose there were a lot. Certainly there were moments when a couple would be in a fight, and then both would turn to me and ask: What do you think? I tried my best to not take sides. But I’m human and, of course, sometimes I wanted to. I think some of the most delicate situations were talking about incidents of sexual abuse that people in the book faced, such as Ashok when he was a kid. One government study found that one in two children in India have faced sexual abuse. But this is not something that’s often openly talked about.

THE SWADDLE: There is a growing sentiment among young Indians — perhaps brought on by rom-coms? — that love marriages are the key to fulfilling lifelong partnerships. But your book  illustrates that both love and arranged marriages can be plagued by disappointment, mismatched expectations, and unhappiness. Neither approach is (necessarily) the key to lifelong happiness. What is getting in the way for these couples, and what does that mean for how we view the institution of Indian marriage?

EF: There is a lot that can get in the way of a happy marriage. I like Farooq’s sentiment in the book that the problems with marriage can be money, time, and that you’ll never have as much as you want or as you think you need. For me expectations also play a big role.

But in India — and in many changing societies — an added layer is the entrenched attitudes that are in direct conflict with what people are seeing in the media and online or hearing about from their friends or are otherwise aware of. If a woman has access to the most extreme pornography at home but is still not supposed to hold hands with her boyfriend or husband in the street, obviously that’s going to be confusing. I think that conflict is one of the hardest things for couples in India right now.

THE SWADDLE: How have the couples reacted to the manuscript?

EF: There has been a variety of reactions. Ashok wanted to know who would play him in the Bollywood movie. Others, such as Parvati, found it difficult to read but I know she and Ashok also read the manuscript together and then discussed each chapter afterwards.

THE SWADDLE: You lived in India for a few years, then left for four years, then came back. How did things change during those years?

EF: I lived in India from 2008 to 2010, came back in 2014 and 2015, and again now in 2018. I think I was pretty surprised in 2014, when I first came back, by how little had changed. One of my old colleagues from Forbes India describes Mumbai as perpetually in a state of “suspended decay.” It seemed that infrastructure had only improved in pockets, and only for the wealthy. But the people I knew had changed immensely. The couples’ marriages were in vastly different places from when I’d last seen them.

THE SWADDLE: How did your own perspectives on love and marriage evolve throughout the course of your friendship with these couples?

EF: I think in hindsight I went into this project with the idea that at the end I would have love and marriage figured out, and would have built my own successful relationship. But at the end of it all, just after I turned in the book, I wrote a New York Times Modern Love column about the failure of my relationship with the person I thought I’d marry.

That said, I know I learned a lot from the couples in this book. I have been learning from them ever since I first met them in 2008. I learned that a partner will not necessarily fulfill every expectation and should not fulfill every role. I learned that moments of grace are possibly even when a relationship is really struggling. I learned that people are fundamentally flawed and we should sometimes cut them a break but also not too much of one. I learned that we can only really find happiness in ourselves. And I learned that women are gaining agency in the U.S. and India and all around the world and that’s making love and marriage more complicated but I think ultimately better.