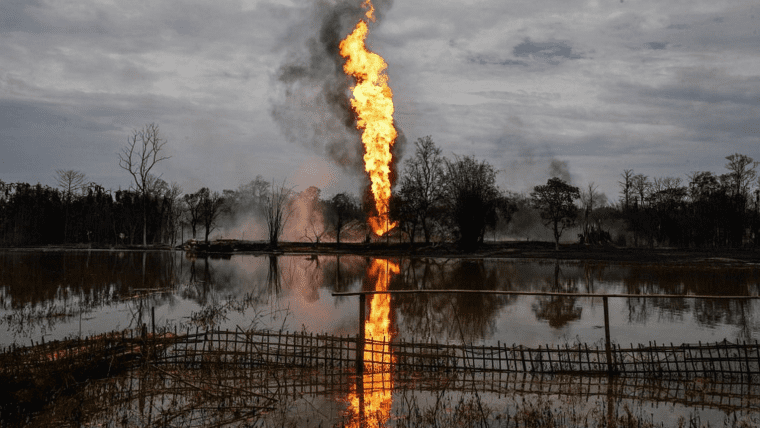 A new report assessing the damage wrought by an oil disaster in Assam’s Baghjan village stated that recovering even 70-80% of the damaged ecosystems would take at least a decade.

An Oil India Limited (OIL) well exploded in the village last May after an uncontrolled release of gas, leading to a massive fire that raged on for five months from June to November. It was finally extinguished on November 15. The well was situated close to the Dibru Saikhowa National Park (DSNP), the wetland Maguri-Motapung Beel (classified as an Important Bird Area), and the Bherjan Borjan Podumoni Wildlife Sanctuary.

But the effects of the fire have damaged the delicate ecosystems. “The landscape is rich in biodiversity, ecology and contains fragile ecosystems that harbor some of the most endangered, rare, vulnerable, threatened and near-threatened wildlife,” the report noted.

Many important animals and organisms essential for these ecosystems have died. The report estimated that 55% of the biodiversity in the Park has been lost, and more than 20,000 hectares of wetland have been destroyed, according to Mongabay.

The government report was compiled by Mahendra Kumar Yadava, an Assam forest department official who headed the one-person inquiry commission, set up by the Assamese government. The commission found that the estimated ecological damages from the fire amount to Rs. 25,000 crores.

The impact of the heat, sound, and a toxic mushroom cloud emanating from the fire resulted in the loss of habitat for several species of birds, amphibians, and even aquatic animals, putting many in acute danger.

Underwater noise and chemical pollution drove the Gangetic river dolphin species population down to single digits. More than 70% of earthworms in the wetlands have been wiped out, and migratory and other bird species have also been severely impacted by the blowout. Three Schedule I (endangered) animals were killed, along with an estimated 29,000 wild animals and organisms. Recovering such a delicate ecosystem will take time, experts say.

The fallout from the fire was devastating for human life too. Three villagers were killed, and others were forced to flee when the well exploded. Local betel and tea plantations were also ruined, forcing returning residents to look for alternative livelihoods in neighboring villages.

“Agriculture, fishing, and animal rearing are the main occupation of most people in this area. But now because of the oil spill, agricultural land will become infertile and no farming will be possible for many years. Also, fishes and domestic animals are dying in large numbers because oil has contaminated grasslands and water bodies,” Niranta Gohain, an environmental activist, told Mongabay.

In November, a National Green Tribunal (NGT) committee declared the Baghjan oilfield to have been operating illegally. The committee further questioned OIL on whether it “wasted precious time” in responding after the first symptoms of the blowout came to light.

The Baghjan blowout “could be the largest and biggest onshore blowout so far in the world as it continued for more than five months without any change in its intensity or exhausting of the well,” the report claimed.

The provisions available for ecological compensation — the Public Liability Insurance Act, 1991 and the Environmental Relief Fund — were both found inadequate for the scale of damage wrought by the disaster.

The report’s recommendations, therefore, include the creation of a special fund for environmental disasters, a wildlife health research institute, welfare schemes for affected people, and rejuvenation of the ecosystem. The report also warned that one more oil well blowout could take place in the Tinsukia district in the next five to 10 years and that the impact on the area’s ecosystems and population should be thoroughly studied.