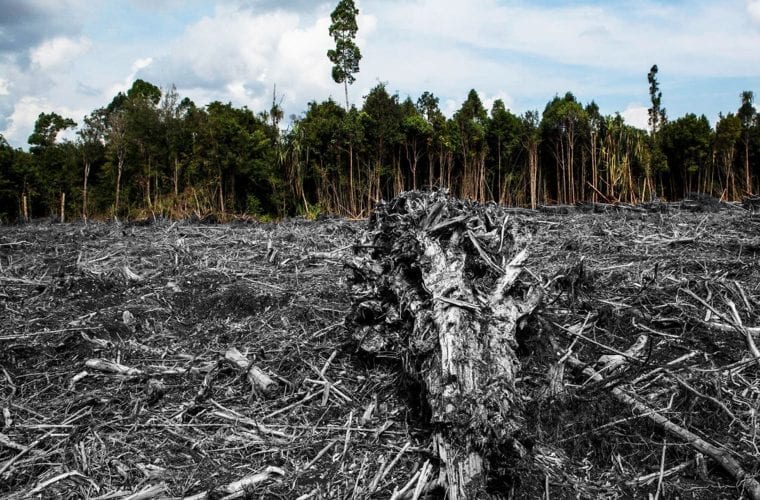 Some of the world’s biggest brands are responsible for widescale deforestation in Indonesia, in direct contravention not only to their company policies but also to Indonesian law, according to an undercover investigative report by the NGO Rainforest Action Network (RAN).

The environment group has accused Nestlé, PepsiCo, Unilever, Kellogg’s, Hershey’s, among other companies, of buying palm oil from mills that source from trees grown on illegally cleared land in Indonesia’s Singkil-Bengkung region, encompassing the nationally protected Rawa Singkil Wildlife Reserve, the Singkil and Kluet peatlands, and the connecting lowland rainforest.

The wildlife reserve, in particular, is “one of the highest priority conservation landscapes in the world,” says the report, alluding to the area being home to critically endangered species such as the Sumatran tiger, Sumatran elephant, and Sumatran rhino. With the densest population of orangutans in the world, too, the area has earned the sobriquet “the orangutan capital of the world.” This includes a culturally distinct subpopulation of orangutans that are unique in that they have demonstrated social structures and tool-using behaviors.

The reserve is also home to a very ancient peatlands swamp system — a type of wetland — that is an important carbon sink, that is, an area that sucks in and traps carbon dioxide from the atmosphere. “Conversely, when drained and cleared as documented here, these peat soils transform into carbon bombs that emit catastrophic levels of pollution into the atmosphere for years on end,” according to a press release by RAN.

Palm oil is used in a mindboggling number of everyday goods, from shampoos to chocolate, and its demand has driven massive deforestation, primarily in Indonesia, during the last decade. In 2010, some of the world’s largest brands like Nestlé and Unilever pledged to reach net-zero deforestation by 2020 through responsible sourcing of cattle, palm oil, and other commodities. However, one year before their self-enforced deadline, one-fifth of all palm oil plantations in Indonesia illegally occupy deforested land; if someone is producing it, it means someone is buying it.

All this, as the climate crisis worsens and, more tangibly, Indonesia battles a brutal forest fire season that is turning its skies blood red. “In the lead up to the 2015 U.N. COP Paris Agreement negotiations, massive peat fires in Indonesia, driven primarily for palm oil plantation expansion, were emitting more carbon pollution into the atmosphere than the entire United States economy combined,” the release notes, adding that this may ultimately undermine Indonesia’s ability to meet its commitments under the Paris Agreement.

Most companies, like Nestlé, have completely denied the allegations, while others claim that the complexity of the supply chain makes it hard for them to discern where the palm oil is being sourced from, when asked to respond to the allegation by Business Insider. But RAN stands by its investigation: “The evidence resulting from our investigations is unequivocal,” Gemma Tillack, RAN forest policy director, said in the press release.

Indonesia to Shift Its Capital as Polluted, Crowded Jakarta Sinks Into Sea

The investigation: process and conclusions

RAN conducted field investigations starting from the beginning of 2019 and documented the trafficking of freshly harvested palm oil fruit from an illegal plantation on the peatlands inside the wildlife reserve to two nearby oil mills. Satellite analysis and previous field investigations had revealed that these peatlands were cleared in 2013 and converted into a plantation — despite deforestation and the establishment of palm oil plantations being prohibited under Indonesian law, according to the report.

Field investigations, interviews and transaction records confirmed that “a number of primary traders that operate refineries sourcing from mills in the Singkil-Bengkung region, and secondary traders that source from primary traders for further distribution, have been linked to the two mills found to be accepting oil palm fruit from the illegal plantation located inside the Rawa Singkil Wildlife Reserve. Published mill lists show that two of the largest palm oil trading companies in the world — Golden Agri Resources (GAR) and Musim Mas — have continued to directly source crude palm oil from the mills sourcing palm oil fruit illegally grown in the Rawa Singkil Wildlife Reserve,” the report states.

Unilever, PepsiCo, Nestlé, Mondelēz, General Mills, Kellogg’s, Mars and Hershey’s — global brands responsible for some of the world’s most beloved snacks such as Mars bars, Oreos, instant ramen and Pop-Tarts — currently list the two illegal mills as suppliers. This puts them at risk of manufacturing snacks using illegal palm oil, thereby driving the demand for the same. This, despite having made public commitments several years ago to halt sourcing from suppliers who illegally deforest rainforests and peatlands. “[They] lack the necessary procedures to trace the location where the palm oil they sell is grown, a key requirement for complying with the [NDPE] policies all of these brands have publicly committed to,” according to the report.

At the supply end of the chain, RAN’s investigations also expose glaring hypocrisy by global banks, who are financing major palm oil traders active in the region — most notably GAR. Japan’s Mitsubishi UFJ Financial Group, Dutch bank ABN Amro and Singapore’s OCBC appear not even to be complying with their own policies as their client continues to source illegal palm oil grown in the Rawa Singkil Wildlife Reserve,” according to another press release by RAN.

The companies deny all allegations

RAN demands that the companies caught contributing to the destruction of Indonesia’s peatlands and rainforests stop buying palm oil sources from the rogue mills the report identifies or financing the culprits who process and ship illegal palm oil to the global market. In addition, the companies should establish transparent and verifiable monitoring, traceability and compliance systems to ensure they are only sourcing or financing legally and responsibly grown palm oil. They must also place offending producers on no-buy lists, thereby cutting off any future financing to them.

However, most of the global snack companies have denied the allegations made by the report, while admittedly making assurances that they are completely dedicated to ending deforestation of rainforests and peatlands, not using fire to clear land for palm oil plantations and cutting ties with suppliers who don’t abide by their rules.

Nestlé — owner of brands such as Milo, KitKat, Nescafe and Maggi — spoke with its supplier, GAR, and said: “GAR confirmed that [the] two [illegal] mills … do not source palm oil from plantations engaged in deforestation activities in the Rawa Singkil Wildlife Reserve,” in a statement provided to Business Insider. Mars (produces Snickers and Twix among others), Hershey’s, and Mondelēz (owns brands such as Cadbury and Oreo) all claimed they could not be sure where exactly the palm oil they procured was coming from — and whether it was the illegal palm oil in question — as it was difficult to keep track of its entire supply chain.

“While oil from these mills was not sold directly to Hershey, we have no way of knowing if palm oil from these mills actually made its way into the oil that was sold to Hershey by our direct suppliers. This list of mills in our traceability work goes beyond Hershey’s physical supply chain,” a spokesperson said to Business Insider. A Mars spokesperson said, “We’re working to deliver 100% deforestation-free palm oil by the end of 2020 and advance respect for human rights across our suppliers’ extended supply chains.” Unilever, which makes Ben and Jerry’s ice cream, didn’t accept or deny the allegations and told Business Insider that it was undergoing its own review at the time and that it had “commenced its grievance process so any appropriate action can be taken.”

Both GAR and Musim Mas said they have approached both illegal mills to seek responses and asked their suppliers to exclude the mills from their sources.

It’s true that keeping track of a supply chain from plantation to supermarket is incredibly hard, as it consists of several moving parts spread out across the world, especially closer to the source of the contentious product — in this case, palm oil. To find out who illegally cleared the forest, usually by starting fires to set up a plantation; then, which broker is supplying illegal oil to the mill; and then, which mill is supplying to one of many refineries owned by a bigger supplier that goes on to fulfill these brands’ requirement, is extremely resource-intensive. As the report shows, it often requires on-the-ground interviews, physical tracking of trucks trafficking the palm oil, and satellite imagery analysis.

But, if an NGO can do it, these humongous, omnipresent global brands definitely can. “The fact that it takes an NGO-conducted investigation to expose that these major global brands are still actively sourcing Conflict Palm Oil from illegal sources, years after each of them has issued public policies explicitly committing them to stop sourcing from suppliers destroying rainforests and carbon-rich peatlands, signals a major failure of the implementation efforts conducted to date by these companies,” the report says.

RAN spokesperson Laurel Sutherlin said in one of the press releases: “The Singkil-Bengkung region of the Leuser Ecosystem presents a rare opportunity to still get it right … This area still has vast, intact habitat for elephants, rhinos, orangutans, tigers and countless other species, but without real action by snack food companies and major banks, this priceless treasure and globally important, natural carbon sink will be lost to death by a thousand cuts.”