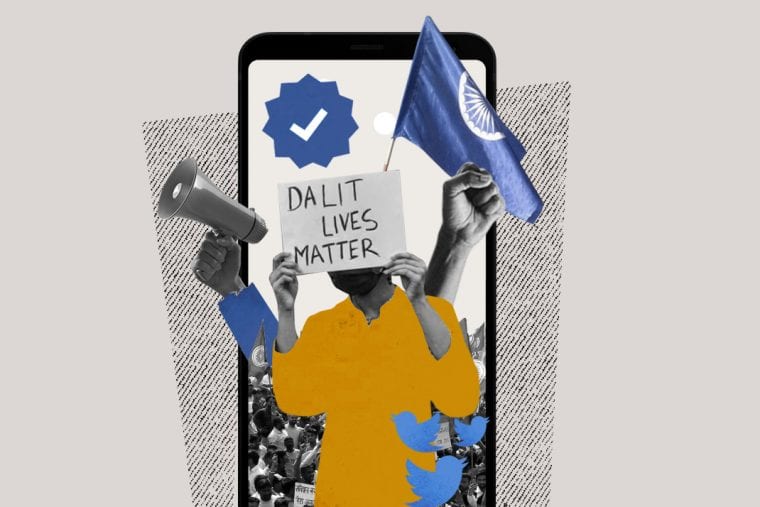 A few weeks after Clubhouse became open to Android users and a more diverse crowd joined the platform, there has been a notable shift in the conversations that were earlier dominated by the Savarna. One such instance was when a popular influencer was hosting a room on whether their fellow internet-famous friends would credit luck or hard work for their success. After a public intervention to include caste as a factor in these dominant-caste celebrities’ careers, the host struggled to even mention the word “caste,” let alone include it in the conversation. Dismissive phrases like “Moving on” or “Things have become too serious” are heard all too often when caste is brought up in these dominant-caste-led spaces.

This is just one example of the caste oppression in virtual spaces that people from the Dalit, Bahujan, and Adivasi (DBA) communities face every day. Even though social media is considered a democratic space, it is definitely not built to be safe for minorities.

This oppression is made exponential because of the caste nexus that controls narratives on social media platforms. Not regulating and addressing harassment, denying verified status to caste oppressed people, thus are everyday issues.

Another common phenomenon witnessed on these platforms is the erasure of anti-caste voices. Recently, when actor Randeep Hooda was called out for a casteist (note: not distasteful) joke on Mayawati by Srishty Ranjan on Twitter, she received no credit for bringing it to light. This is important to note because although Hooda faced consequences for his remarks, Srishty was named only as “a Twitter user.”

Such erasure of a person’s online activism would not have occurred with a dominant-caste person; the casteist bias comes before the reputation of the person and too often goes unchecked.

The #MeToo movement in the Indian context provides yet another testament to the erasure of DBA people. Raya Sarkar’s List of Sexual Harassers in Academia (LoSHA) — which marked the advent of the movement in India — was criticized heavily by several dominant-caste feminists like Nivedita Menon and Kavita Krishnan for lacking due process. The same feminists later went on to lead the #MeToo movement. Their choice of which movement deserved support and amplification is rooted in their caste bias.

Further, although #MeToo centered instances of sexual harassment at the workplace and sparked an important conversation online, at no point was the fight of Bhanwari Devi credited or acknowledged in mainstream discourse. Bhanwari Devi was an OBC woman whose fight became the catalyst for the Vishaka Guidelines that safeguard women’s rights in the workplace.

Those who are able to gain massive followings on social media platforms are also able to do so because of the dominant-caste nexus that enables them. Newsroom heads, writers of stories about conversations on the internet, those in agencies, the primary audience for brands — all belong to dominant castes. DBA people and religious minorities don’t just lack representation in the spaces they occupy, but also in institutions that legitimize the positions of dominant caste people as influencers, content creators, or thought leaders in these spaces.

This becomes apparent in the aesthetic, content, trends, and language that receive market approval and validation on these platforms. It shows in the popular culture references that get highlighted, the stories that get lauded, the creators that are considered acclaim-worthy and are able to, consequently, monetize it.

People from the DBA community thus get relegated to the margins, where our activism and politics remain.

However, we don’t just exist on these platforms to assert our politics. We talk about our favorite football team, shows, memes, and thirst traps just like everyone else. Our mere existence on these platforms is resistance enough, and assuming that our presence must further our political beliefs places an undue amount of pressure on an already marginalized community that shouldn’t have to fight to be recognized as people.

Since allyship as a discourse became popular online, it has inevitably centered the privileged, furthering the exclusion of voices from the community. Anti-caste activists and voices get amplified only when they discuss what the dominant caste people can do, how they can show up, how they can solidify themselves as allies. All social justice movements in online spaces are dominated by those with caste and class privilege. They often fail to consider caste and how it’s intertwined with the fabric of the Indian society, often actively alienating marginalized voices.

This is further amplified by the lack of intervention from these media platforms when it comes to instances of casteist discrimination and harassment. Casteist attacks often go unchecked, with platforms claiming that they do not violate “community guidelines.” While these are instances of personal attacks, even public callouts of discrimination lead to no tangible consequences. This is because both the ones curating guidelines for the platforms and those who gain prominence on them belong to dominant castes. All of this further illustrates the exclusionary nature of internet call-out culture, the voices it centers, and the people it considers worthy of rallying behind.

This lack of respectful space for marginalized communities online is a direct result of socio-economic factors. A 2017-18 national survey tells us that less than 17% rural and 44% urban households have access to the internet. This divide further gets amplified in homes of those listed under the SC and ST lists. The Lokniti-CSDS National Election Study 2019 shows that dominant caste people are 1.5 times more likely to own a smartphone than someone who belongs to the SC/ST community. This data speaks to how building networks that provide support, amplification, and solidarity online is not as easy for marginalized communities because of lack of access.

Casteist spaces negatively impact how communities interact with them. Personally, I have chosen to shift my focus from educating the dominant caste to building spaces with community and solidarity among marginalized folks and contributing to the discourse around liberation.

The fact is that these platforms mimic real life. The dominant-caste aesthetic that gains popularity online borrows heavily from European standards, as it does in real life. Content creators and those who influence trends reproduce these standards and alienate everyone who doesn’t. Those from marginalized backgrounds do not subscribe to this western aesthetic and, more often than not, don’t have the resources required to imitate this aesthetic.

To change the way these spaces function, there has to be an inquiry into how these spaces came to look like this. We need to stop adding more chairs to the table for the sake of inclusion and diversity. We need to instead flip the table, discard the idea of passing the mic, and build on the idea of community and safety for all. Hannah Stephen is a copywriter by day and a writer running from pillar to post making sense of culture and community by night. Her writing explores the themes of digital culture, accountability culture, and envisioning an anti-caste world.
See all articles by Hannah