Covid19 Has Made Us More Vulnerable to the Impact of Climate Change. What Now? 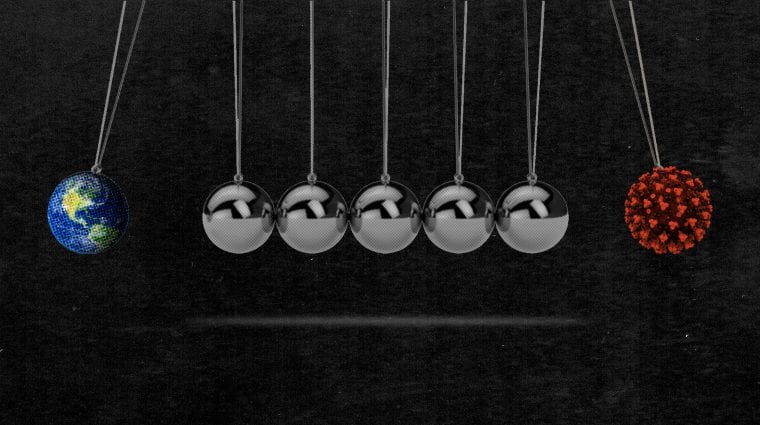 The climate change space has been abuzz with the “Nature is Healing” narrative, centred on the drastic decrease in air pollution across hotspots. The positive impacts are being touted through articles with fake news of dolphins returning to the Venetian Lagoon, and people in Shanghai being able to see the Tibetan Plateau. This over-enthusiastic narrative, while clearly reflecting the impact of human action on nature, leaves out the fact that large populations in developing countries are a lot more vulnerable to climate change now, in the face of Covid19.

The world is seeing an interconnected financial, social, and institutional crisis on such an unprecedented, global scale for the first time since World War II. Covid19, therefore, presents an opportunity for collective action on issues that affect us across borders. This piece takes a look at four key questions that Covid19 brings up in the climate crisis conversation.

Will climate change take a backseat because of Covid19?

As governments focus on their responses to the pandemic, unsurprisingly, climate change might become a less relevant issue through 2020–2022. These are the years that are seen as our ‘last chance’ – to keep the global temperature below 1.5 degrees Celsius and bring down global emissions by 2030 – before certain climate impacts become irreversible.

Each additional increment of heat, each fraction of a degree, will worsen things markedly. Think more severe and frequent storms and cyclones, more images from Australian bushfires, more vanishing islands owing to sea-level rise, and more severe droughts. As per the United Nations Environment Programme’s 2019 Emission Gap report, we are already behind our 2030 targets. Covid19 seems to have the potential to derail climate ‘quick-wins’ and leave governments with governance fatigue, reducing political will and bandwidth to deal with yet another crisis as governments and economies heal.

Green Recovery: How will countries build back after coronavirus?

The recovery process in the aftermath of Covid19 will determine how successful we are in keeping climate conversations and ambitions on track for a 1.5-degree world. Most countries in the Global North, led by the European Union, are looking at a ‘green recovery,’ or building back better with renewable energy, clean technology, and clean innovations in infrastructure and transport.

Disasters have often led to more extractive manufacturing booms, making things worse for the climate. The Asian financial crisis of 1997 saw an increase in Malaysian and Indonesian extraction of palm oil. The climate conversation, therefore, runs the risk of governments capitalizing on cheap oil prices and even cheaper coal prices to fuel its recovery. For climate-sensitive nations such as India, a stimulus to manufacturing and towards extractive industries might be low hanging fruit in the face of keeping 60 million poor in India out of debt traps and preventing the doubling of poverty.

These are the tough trade-offs that countries across the world, especially developing nations, will face and, in all probability, the environment and climate change will slip through the cracks of the immediate agenda, reversing all positive action taken for climate change in the past few years. This would also exacerbate existing carbon lock-ins and should be avoided at all costs.

It is crucial that with every rupee that is pumped into the recovery process, the central and state governments evaluate if they are doing more long-term harm for some short-term wins.

The missing human face: What does this mean for the poor?

With economies and individuals living under varying degrees of lockdowns and travel having been brought to a halt, the International Energy Agency has forecasted an 8% fall in CO2 emissions this year. While this is good news, it is also imperative to see beyond the emissions narrative and understand what this means for existing climate vulnerability and coping capacities of certain communities.

In South Asia and specifically in India — whose agrarian economy is particularly climate-sensitive — communities are already grappling with the poverty traps set by the lockdown (such as the case of stranded migrants). The ability of such people to respond to the double catastrophes of Covid19 and climate change has been heavily compromised.

Climate impacts and natural stressors have not stopped because of Covid19, as seen by the parts of Bangladesh and Bengal completely ravaged by the recent cyclone Amphan. It has left behind complete destruction of the climate-sensitive and biodiverse hotspot of the Sunderbans as well as the livelihoods of the 3.5 million people who inhabit these islands. What they witnessed was an apocalyptic cocktail of climate change and Covid19. Further, owing to the ever-extending lockdown in the country, the inhabitants of these areas have not been receiving daily wages and their ability to respond to Amphan and build back what was lost has been completely devastated.

How do we sustain positive change?

New behaviors and habits are being formed in lockdown, especially in carbon-intensive sectors such as transport and mobility. Consumption patterns are also changing with many supply chains having been hit. The focus is now on buying what is locally and easily available, which is reducing the carbon footprint of numerous products in the consumer retail sector (including food and apparel).

The people working remotely while social distancing make a compelling case to reduce vehicular emissions from employees globally commuting to work. Work that can be done via calls and video chats negates the need for multiple business trips.

However, for all of these micro-changes and habits to transition into norms and cement these positive emission-saving behaviors, governments and practitioners need to understand how to nudge individuals and corporations towards more low-carbon lifestyles.

A recent survey in the U.K. showed that “of nearly 20,000 drivers, 22% aimed to drive less after lockdown.” Such public perceptions and behavioral insights can be used to model new behaviors relating to consumption and mobility patterns after Covid19.

This crisis has come at an immense cost and has made it painfully clear that the world is interconnected. Issues such as climate change or public health cut across development gains made in other sectors. However, it has also led to a great deal of personal and collective action at the ground level. The greatest learning, therefore, is that no one can prepare for climate change alone and in a silo, with the need for collective and individual action being paramount. Rishika Das Roy is a Resilience and Urban Policy Expert with Oxford Policy Management, with over 8 years of experience across the policy cycle for technical areas ranging from climate change policy, climate adaptation and governance, urban resilience, and urban sanitation. This includes the delivery of projects under the ambit of numerous Government of India programs and policy initiatives including Swachh Bharat Mission, Smart Cities, AMRUT, and working on State Action Plans on Climate Change for different state governments. Prior to this she worked on leveraging behavioral insights for resilience, gender and sanitation at BBC Media Action, and worked on climate action and community mobilization for Earth Day Network and Ashoka: Innovators for the Public. By training, she has an MSc in Environment and International Development from the London School of Economics.

See all articles by Rishika