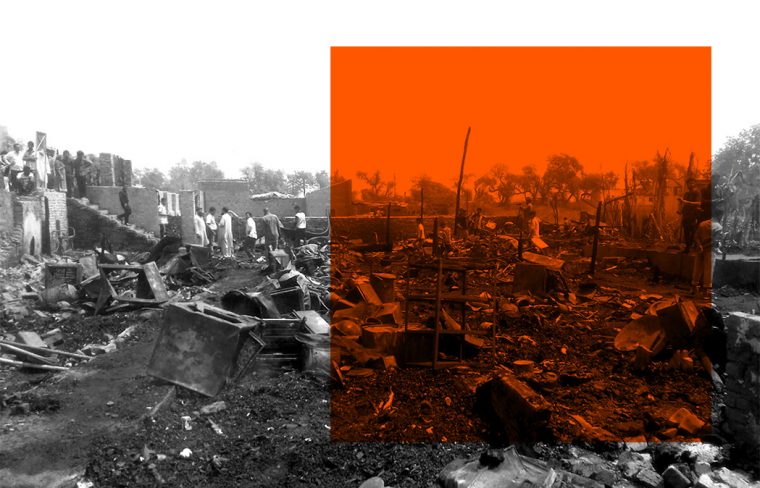 A massive fire broke out in Delhi’s Madanpur Khadar Rohingya refugee camp on Saturday night, leaving hundreds of refugees without shelter. Delhi’s fire department put out the fire in six hours, but there’s no news on the type of food, water, and shelter-based aid planned by the government. As of now, several independent volunteer groups are helping with relief work, according to a report in Al Jazeera. No deaths or serious injuries have been reported as of yet.

This incident highlights the urgent need for fire-safety interventions in informal refugee settlements across urban areas. Fires are not uncommon in Rohingya refugee camps, or in other refugee camps. The Rohingya community witnessed a huge fire in 2018 in a neighboring, smaller area that gutted the entire camp. A refugee told the Hindustan Times this time that the camp had dealt with three smaller fire incidents in 2021.

Moreover, there was a 25-fold increase in the rate of settlement fires across 31 countries from 1990 to 2015, according to research published in the Burns journal that looked at more than 130 fires globally.

A lot of the shanties are made of cheap materials that are not fire-resistant; activities like cooking over open flame make these huts vulnerable to fire hazards. Since these refugees live in tightly packed shanties, there is a greater risk of the fire spreading faster, leaving families a lot less time to escape — let alone take their valuables and whatever documentation they might have.

Why We Need To Stop Calling People ‘Illegal Immigrants’

Moreover, electric wires often lay open and unprotected around their surroundings, making short-circuit-related fires more common. In the 2021 Cox Bazaar fire, the Rohingya refugee settlement in Bangladesh where almost a dozen people died and thousands of others were injured, several activists pointed out that placing barbed wire around the camp was a major reason why people who died could not escape through the wire on time.

Another factor in densely populated cities like Delhi is that of traffic. As several of these refugee camps exist at the outskirts of the city, fire aid is often delayed due to traffic by around 40-45 minutes, causing further fire damage.

Fires in cities are a hidden problem in India, according to a paper published in the 2019 Global Assessment Report on Disaster Risk and Reduction that used New Delhi as a case study. These fires are also frequently underreported, especially when they occur on the outskirts of the city, making the actual number of fire-related deaths almost six times higher than that quoted in published sources like the National Crime Records Bureau reports.

As of now, there’s no clarity on the cause of the fire in the Madanpur Khadar area. Police officers believe it was a short circuit that caused the fire, but refugees haven’t ruled out arson as right-wing groups have previously started fires in the region. One refugee also claims that masked individuals warned them about a fire several hours ago.

But the severity and frequency of these fires in Rohingya camps worldwide also point to their dangerous living conditions and how they are deprioritized by the countries they seek amnesty in. Several families have lost their savings, medication, food, and water due to this fire, retraumatized after first facing displacement from Myanmar and then losing their belongings in the 2018 fire.

Over and beyond these dangers, there’s no likelihood that these fire incidences will stop anytime soon. Inadequate, dangerous living conditions in refugee camps show the need for well-laid out and safe settlements to protect an already vulnerable community.