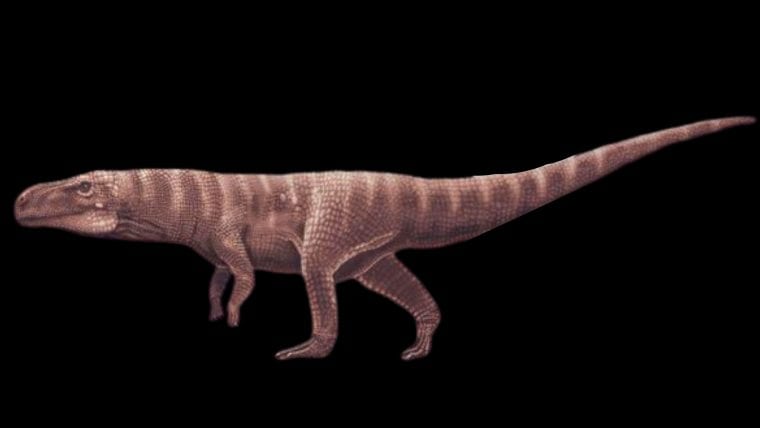 A new study suggests that fossil tracks preserved in a South Korean rock formation belong to a crocodile-like animal that “ran like ostriches” — providing the first footprint evidence that ancestors of modern-day crocodiles walked on two legs.

Published in Nature Research’s peer-reviewed journal Scientific Reports, the study examined the size and spacing of 106-million-year-old tracks in the fossil-rich Jinju Formation, a Mesozoic geologic formation in South Korea, where a number of dinosaur-fossil remains have been found in the past. The track marks are about 9.5 inches (24 centimetres) long, and scientists believe that the crocodylomorphs, or extinct relatives of modern-day crocodiles, that made them were approximately two to three meters long. The team of researchers has named them Batrachopus Grandis.

These trackways were previously believed to have been made by pterosaurs, or flying reptiles. However, pterosaurs are believed to have leaned on their wings while walking — essentially, meaning they walked on all fours. But, no wing, or hand, prints were found on these tracks. Moreover, the researchers believe that the skin impression found on the heel prints, including robust marks of pads and joints, resembled that of modern-day crocodiles. And, the lack of any tail-drag marks led the researchers to conclude that the creatures moved bipedally, or by means of its two rear limbs, or legs. And, the depth of these impressions made by the heels also suggests a more upright posture, the scientists said.

But, “Short of finding the animal dead in its tracks, there’s always a little bit of uncertainty,” Professor Martin Lockley, paleontologist and geologist at the University of Colorado, Denver, and the communicating author of the study, said. This ambiguity was echoed by other members of the scientific community too. Another fossil trackway specialist Professor Phil Manning from the University of Manchester in the UK, who was not involved in the research, welcomed the study calling it “very interesting,” but expressed reservations about the crocodilian interpretation made by the team. He argued that modern-day crocodiles rotate their feet outwards while on land, and not inwards like the tracks suggest. “But whether it’s a croc — unfortunately, we just don’t have the fossil bones to tell us,” Professor Manning told BBC.

But this isn’t the first piece of evidence that crocodile ancestors were bipedal. Over a decade ago, fossils dating back over 230 million years were found in a geological formation in North Carolina. And in 2015, based on skeletal reconstructions of the fossil remains, researchers concluded that they belonged to the oldest and largest ever crocodylomorph scientists have come across till date — a nine-foot-long creature that was then named “Carolina Butcher” because of its “fearsome, blade-like teeth.”

Finding the first footprint evidence of the crocodylomorph in South Korea is indeed a big step, and has generated a lot of excitement. “People tend to think of crocodiles as animals that don’t do very much; that they just laze around all day on the banks of the Nile or next to rivers in Costa Rica. Nobody automatically thinks I wonder what this [creature] would be like if it was bipedal and could run like an ostrich or a T. rex,” Professor Lockley said.