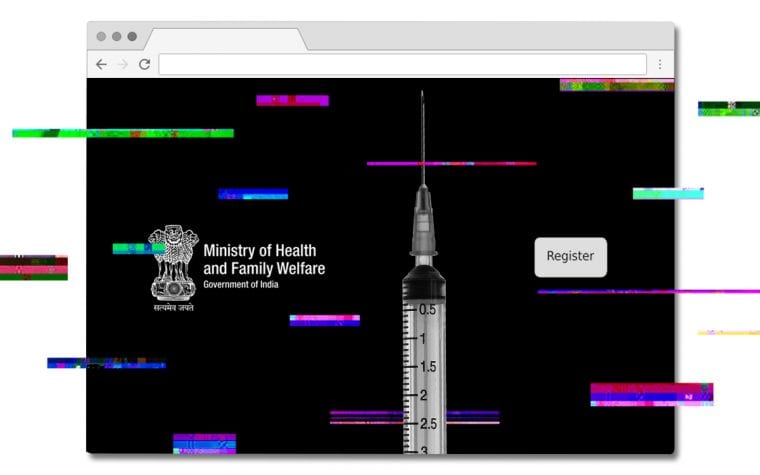 On April 28, at the stroke of 4 p.m., millions of Indians aged 18+ rushed to register themselves for a Covid19 vaccine on the platform built especially for this purpose, Co-WIN. Within minutes, Co-WIN crashed — many couldn’t log in, many couldn’t register, and those who did couldn’t find a slot for a vaccine anyway. Yet, the government took to Twitter to celebrate the “successful” roll-out of the registration process.

“Pleased to note,” Minister for Health & Family Welfare Harsh Vardhan tweeted, “our world-class Co-WIN platform ensured smooth rollout of beneficiary registration for Phase 3 of world’s #LargestVaccineDrive.” He noted that in the first three hours, 80 lakh people registered themselves, 1.45 crore receives an SMS, and the website recorded 38.3 crore API hits — a sign of the platform’s roaring success.

The celebration conveniently overlooks the technical snags that kept more people from registering, and worse, presents a glorified narrative of a vaccine drive for which neither the vaccine nor the infrastructure is available.

At a logistical level, the ‘glitch-free’ experience Mr. Vardhan claims damages the overall national policy around immunization — because how do you fix something without acknowledging it’s broken? The government’s refusal to take note of the Co-WIN servers’ incapacity condemns the system into a cycle of failure. With demonetization and Digital India, the country has been eyeing digitalization in all realms for a while now; the vaccine registration platform’s failings then needs greater scrutiny rather than covering up technical hiccups.

But the government’s framing of this malfunction as a success speaks to a larger pattern — one of evading accountability, distorting facts until the truth is no longer recognizable, and presenting a narrative that all is well and functional. This is hardly surprising in light of the last few months: it was the public, not the political leaders, whose laxity led to the rising Covid19 cases, many officials said; the central government’s counsel in Supreme Court said the government has met every demand for oyxgen; officials have also said Covid19 relief groups on social media are spreading rumors of oxygen scarcity in hospitals and in fact no one died because of a ruined health system. Even harping about the ‘largest vaccine drive’ belies the severe vaccine shortage in several states right now, making one wonder what is the purpose of talking about registration when no one can get the vaccine anyway.

Arguably, many pointed out the vaccine registration process was designed to fail: most beneficiaries of the vaccine don’t have access to a running internet or a mobile phone to register themselves; the government tech infrastructure has been called out before for its inadequacies; and previous immunization campaigns centering polio and tuberculosis have shown the efficacy of a vaccine roll-out that is more grounded in its approach, rather than reliant on technology.

The rigidity to accept fault is not unique to the Indian government. Many world leaders are guilty of playing fast-and-loose with the truth, presenting a rosy picture to counter a grim reality. Psychologists have mulled over the question of what kind of person (or government) never admits they’re wrong and reached the conclusion that evading ownership of your fault is a sign of weakness and not that of superiority or wit.

A more accurate version of events would be that some 80 lakh people registered themselves after trying for hours; some 1.45 crore peopled received a text after multiple failed attempts; and the website failed to load for most people. Lies, half-truths, misinformation, and propaganda are trusted political tools, particularly powerful in countries with declining democratic integrity, many political theorists note. But there is something sinister in tapping into these reserves during a health crisis, one during which a nation has been called a “chamber of death” and a “living hell.” It is no wonder that reports analyzing democratic indices across the world have reached one conclusion: that several leaders across the globe, including India, weaponized the Covid19 pandemic for political gain and muzzling civil rights.

Let’s say we accept the propaganda — we begrudgingly make our peace with it. The announcement last week that people above 18 years will be eligible for vaccinations starting May 1 brought much respite to an anxious generation. A subconscious fact many confessed to after the registration rollout was they never expected to register themselves, or get a slot, in the first place; but the hope of making it on the other side lingered after a devastating week of the pandemic. Even critics of the government were rooting for the system to function for once. The emotional toll that comes with hoping (and trusting) that your government will do everything in its capacity to immunize you against a deadly virus is exhausting, to say the least.

One wonders where this constant tussle with truth, in a world of insecurity and fear, will lead us. A crashed site, a crashed app may be semantics to the government, but it would do well to note that normally, when there are this many crashes, there are burns, too.