going for a toss 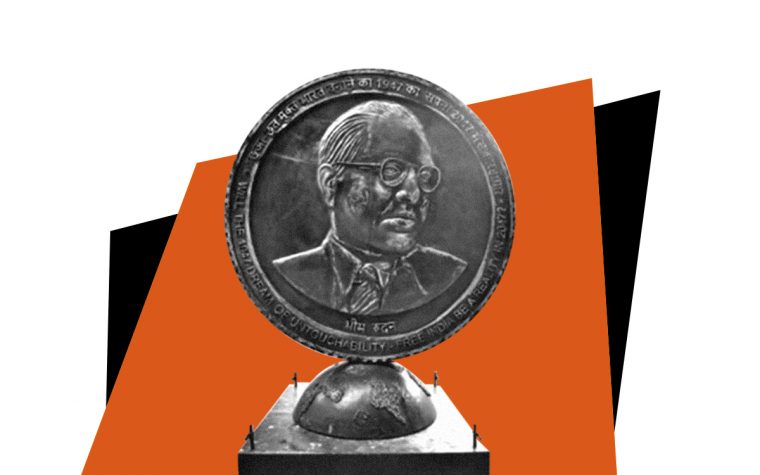 On Tuesday, the Haryana police stopped a group of over 375 Dalits from villages across the country who were on their way to Delhi. They were on their way to deliver a 10-tonne brass coin to the president with an inscription of Dr. B. R. Ambedkar, that asked a simple question: will the 1947 dream of untouchability-free India be a reality in 2047?

The villagers, who began their journey from Ahmedabad under an initiative by Gujarat-based organizations Navsarjan Trust and Dalit Shakti Kendra, faced over 1,000 police personnel — some of them armed with jammers, water canons, and anti-riot vans — on the Rewari-Alwar border between Rajasthan and Haryana. This compelled them to return to Ahmedabad.

Work on the coin began back in 2020 under the program title Bhim Rudaan (Tears of Bhim). Dalits donated brass utensils and other items from their households, which were melted together to shape the coin. It was then sculpted by a 14-year-old artist, and also carried carvings of Gautam Buddha on either side, along with the word “untouchability” inscribed in 15 Indian languages.

The act of assertion comes ahead of the 75th Independence Day, for which the government has actively sought to promote patriotic fervor. The police being deployed to stop the procession then represents the state’s refusal to hear its own citizens’ concerns.

The state denying the Dalit villagers their freedom of movement to march into Delhi to present their questions, moreover, reflects its unwillingness to even acknowledge these concerns. However, not acknowledging a problem does not mean that it does not exist.

500 Workers Gather in Delhi to Protest Non‑payment of Wages

This incident follows two other notable political developments over the last month that reflect the uneasiness of the political and social elite in dealing with issues of caste discrimination and marginalized caste assertions.

Last week, the central government declared in parliament that it will not carry out a caste-based enumeration — a demand of many regional political parties and state governments that aimed to assess the equitable distribution of resources across castes — in the upcoming census. At the same time, the government also refused to share census responsibilities with state governments, effectively rendering meaningless the caste-census exercises already underway in a few states.

A couple of weeks earlier, as the country prepared for the swearing-in of its first Adivasi president, an erstwhile executive at a noted media house strongly opined against Draupadi Murmu’s election on social media, saying he didn’t support an Adivasi president because he was “proudly old-fashioned.”

Martin Macwan, co-founder of Dalit Shakti Kendra and Navsarjan Trust, speaking to the Indian Express about being turned back from the Haryana Border, noted that “the Haryana police had deployed huge police force with water canons and boulders at the border to stop us from entering. The traffic on the highway was also affected due to this. They showed us a letter from the Ministry of Home Affairs with clear instruction to not allow us (to) enter (Haryana and Delhi).” The police cited “security reasons” for disallowing entry to the villagers. It however remains unclear what security concerns a commemorative coin made with the donations and hard work of the poorest of poor villagers could cause.

The initiative sought to remind the political class that even after 75 years, untouchability still persisted in the country, which is a collective political failure. Notably, Economic Times last year reported that over 1.3 lakh cases of crimes against Dalits were registered in the country between 2018 and 2021, many of them for reasons such as riding a horse at their wedding or sporting a mustache. An activist who earlier worked with the Dalit Shakti Kendra, was quoted by The Wire as saying, “Untouchability is still rampant in this country. A Dalit is not allowed to ride a horse in his baraat, not allowed to ride a motorcycle, not allowed to do well in any prominent field. We are angry. They stop us because they are afraid.”