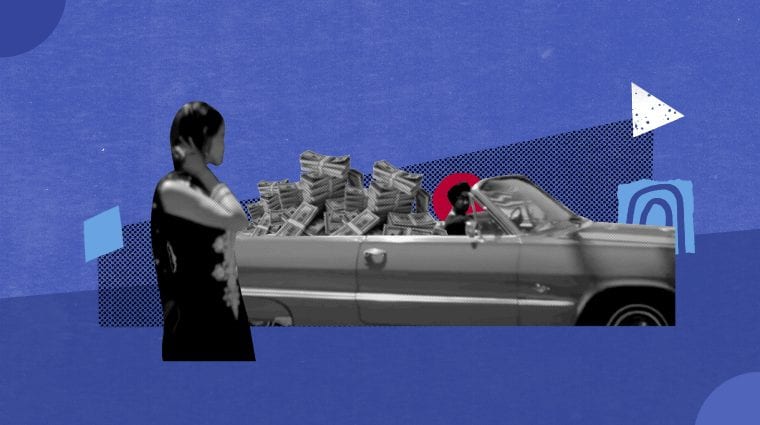 Bollywood is known for many things, but being original isn’t one of them. We’ve all seen what film critic Anupama Chopra calls the “Punjabification” of Bollywood, mainly in the songs the film industry decides to repurpose from regional Punjabi artists. Today, Punjabi accounts for 15% of streamed Indian music, making up an industry worth Rs. 700 crores. Some very popular Punjabi tracks, repurposed and even original, give continuity to many of the terrible themes we’ve already seen in the industry, basically, your average objectification, stalking, violent machismo, and overall sexism. But lately, there’s another theme that adds hectic materialism to the already humiliating mix — one that portrays women in a powerless light. One can figure that the materialism is inspired in part by the hip-hop and Latin influences in our music. However, it’s mainly from the big-spending, live-life-king-size stereotype Punjabis are believed to sport. After all, brand language is nothing new in this bastardized form of local music — so much so, it’s making international brands such as Gucci and Prada more famous.

The state of Punjab has witnessed a steady influx of NRIs, which has further strengthened the stereotype that its population is only about opulent living. While this generalization is certainly not true of all Punjabi culture, nor of all Punjabi people, some regional singers are bolstering this phenomenon, armed with expensive cars in international locales and materialistic women on the side. They’re encouraged by Bollywood’s quickly escalating interest in remixing adopting all things catchy and Punjabi. These artists perpetually highlight men as financially capable of buying any luxury goods of their choice, but constantly portray women’s desire for similar goods as ‘demands’ (‘demandan’ is actually a popular catch-phrase in the lyrics of these songs) that need to be fulfilled by male counterparts.

Sugar Baby-Daddy Relationships Are More Complex Than an Exchange of Sex, Gifts

The song “Lehanga” by Jass Manak (if you haven’t heard it, I’m sure you will soon enough as a Bollywood remake) epitomizes this. Its lyrics go:

Mainu kadey ta lai jeya kar tu shopping mall ve (Why don’t you ever take me to the mall?)

Ve kitho sajaa tere layi sare suit puraane aa (How can I dress up for you when all my suits are old!)

In the music video for “Lehenga,” we see an attractive couple bickering at some posh international location — the woman is pissed off at her boyfriend/husband/roka-partner for not getting her an expensive lehenga. By the end, the man gracefully acquiesces to his lady’s request. In the eight months since its release, this song has had 680 million views on Youtube.

There’s many more that stereotype women as materialistic, simple-minded and juvenile. Ayushmann Kkhurana recently starred in “Naah Goriye” (repurposed from “Naah” ) by Harrdy Sandhu, in which the protagonist says (you guessed it) “Naah!,” when his ‘kuddi’ begs him for a new pair of sandals. In “Jaguar” by SukhE ft. Bohemia, the singer accuses a girl of asking for a Jaguar in return for her pyaar. Speaking of luxury cars, how can we forget “Lamberghini,” which has a tongue-in-cheek twist on a beautiful tappa with a girl flirtatiously asking her friend to give her a ride in his Lamborghini. The Doorbeen twisted yet another folk beauty — “Kale Rang da Paranda” — for the song “Prada,” in which a woman asks for a Prada in payment for her attention, played by Bollywood star Alia Bhatt.

The list can go on. In most of these songs, we see male lyricists and song-writers speaking from the women’s perspective. Meanwhile, most female Punjabi singers continue to stick to themes of love, attraction and village versus city life. These examples betray two types of treatment of women:

First: The “Aww-kuchi-kuchi, my bae wants a purse by Gucci,” featuring the damsel who needs taking care of.

Repeat offender Jass Manak and others portray a woman beseeching a man for gifts as endearing. Her naivete and childlike tantrums put the power in the hands of the man, who likes buying her affection while putting her in her place by controlling her possessions. In short, she’s pretty, she’s loyal and she’s needy — so she’s a perfect companion to further inflate a burgeoning male ego. Example: Someone like Nora in the initial part of Ibsen’s A Doll’s House.

Second: The “Haw! How dare she use me, she only loved that LV,” featuring the gold digger.

SukhE and the Doorbeen play the part of the untiring breadwinner, trapped by a money-minded girlfriend who gave them no rest. They’re the victims who were used for their money, or the heart-broken devotees who were rejected for not being rich enough. Interestingly, they also show a certain sense of pride in being the kind of man a gold-digger would go after — because they’re that attractive. Ex: Think any of the Pyaar ka Punchnama debacles.

Naturally, I’m sick and tired of this misogyny, as any feminist would be. I want to say, “I can buy my own lehengas, Pradas and Jaguars – should I want them.” In fact, The Associated Chambers of Commerce and Industry of India predicts that it is working women – affluent, fashion-forward and beauty-conscious – who will lead the growth of India’s $9 billion luxury market. So why is this shift in women’s consumer behavior and aspirations not reflected in these music videos?

The answer could possibly lie in how we, including the Bollywood industry and some Punjabi artists themselves, perceive the state of Punjab, its culture, and its people. Unfortunately, most depictions of Punjabi are too busy replaying stereotypes and warping the present, to be agents of social change. The fact that Punjab falls amongst the worst performing regions as far as employment for women is concerned, with a recognized female work participation rate of only 8%, doesn’t help matters much.

Perhaps these long-standing, perpetuated stereotypes, and subsequent patriarchal socialization, are why we’re desensitized to portrayals of sexism in music videos that flaunt some aspect of Punjabi culture. Regardless, that does not justify sexism, ridicule, and patronization directed at women in these videos. As catchy as these numbers may be, it’s not okay to sing and dance these issues away, because there’s a grave predicament at hand. In writing for the National Post, society editor Sabrina Maddeux defends gold diggers — “To pass judgment on gold diggers as morally bankrupt while ignoring the systematically broken society in which they exist puts an entire gender in a no-win situation.” If indeed women here are heavily reliant on men to fulfill their financial needs, this is a reflection of a larger system of inequality, that breeds more inequality through these songs. It begs the question: if the Punjabi culture highlighted by this popular music is truly aspirational, is this what we are telling young women to aspire towards?

It’s possible that Jass Manak (or his PR team) gave this some thought, since he attempts a rectification in his latest song “Shopping.” In the video, we see that after making all sorts of appeals to her boyfriend to take her shopping, a woman surprises viewers by pulling out her own card to pay for what she’s bought. She sure as hell has got the money to do so, because we’re already in the middle of the global emergence of a women-driven economy. With the rise of the Indian female luxury buyer, we’re looking at luxury market economics in ways that we’ve never done before and it’s time we adopt new perspectives in music as well. (I’m talking to you too, hip-hop.)

So the next time I’m listening to “Lehenga,” I’m also tuning into my inner critic who hopes to see mainstream artists think more closely about the values reflected in their art. In the meantime, I’ll wait for a Sunanda Sharma or a Jasmine Sandlas to pull a Beyoncé and show off something they’ve bought with their own well-earned money. Or wait for them to complain about a guy who was after them for their riches.

I’ll make do with either. Anahita Sachdev is a content producer with a background in literature and filmmaking. She loves singing and sunsets, almost as much as she loves dissecting popular culture.

See all articles by Anahita