For the First Time, Scientists Edit Embryos Free of Disease, Keep Them Viable 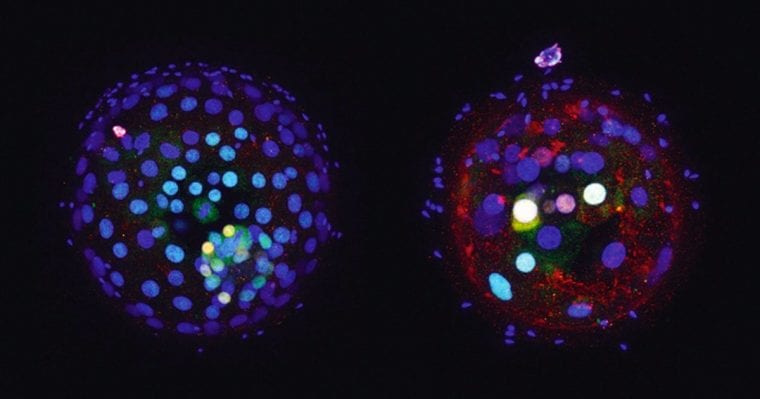 For the first time, researchers have used CRISPR-Cas9, a gene editing tool, to fix a hereditary disorder-causing mutation in viable human embryos, without leaving any unintended side effects to the embryonic genome in their wake, reports STAT News.

CRISPR has long been seen as a tool to revolutionize reproduction by eliminating the potential of hereditary disease and defects, but has yet to live up to its hype. In previous attempts, researchers used a CRISPR method that functions much like a computer’s cut-paste function — the flawed DNA strand, or gene, was snipped out, and a new, healthy strand inserted in its place. In theory, the gene would heal itself, like a graft. In practice, the genetic tweak unintentionally caused hundreds of changes to the broader genome.

In the most recent experiment, the scientists, in China, used a much more targeted cut-paste technique to eliminate Marfan syndrome from an embryo, a disease that is typically inherited from parents. The technique, called base editing, focuses on the subparts of DNA, rather than DNA strands.

Genes, as strands of DNA, are essentially unique series of base pairs. These base pairs are adenine and thymine (A-T) or cytosine and guanine (C-G). Stacked on top of each other and twisted like a ribbon, these form DNA. As and Ts can only pair together, and Cs and Gs can only pair together. If An A accidentally pairs with a C, for example, it can throw a lot of things off. Preventing Marfan syndrome via base editing, was a much simpler, more targeted cut-and-paste job: it only required replacing an A with a G, rather than swapping out an entire series of these pairs (gene).

The researchers did this on 18 viable human embryos — 16 of which had no accidental changes to their broader genomes.

It’s far from a standard offering for parents-to-be worried about passing on a genetic predisposition, but the success has left researchers cautiously optimistic.

“Overall, this pilot study provided proof of concept, and opened the potential of base editing-based gene therapy,” researcher Xingxu Huang of ShanghaiTech University told STAT. “Nevertheless, there is still a long way to go to use it in IVF clinics.”