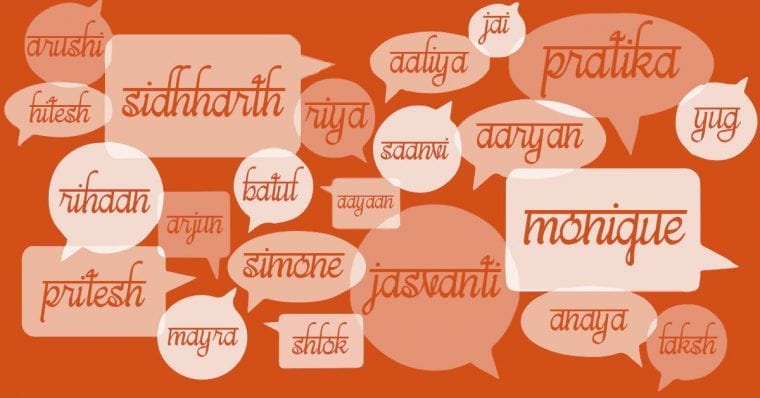 Indian names tend to keep within the boundaries of tradition, making it possible to chart the identity of a relative stranger – their sex, religion, sometimes even their age and familial beliefs – based on just their first name. Access to their surname adds even more dimension.

For example, the name Jasvanti Parikh sounds like it might belong to an elderly Gujarati woman. You might even expect her to be a clever, since that’s what Jasvanti means.

These are all accurate assumptions; that was my gran’s name, and she certainly was clever — a schoolteacher who taught Maths and English to senior-schoolers. This study would suggest we believe names are self-fulfilling prophesies, and my gran’s name is an interesting illustration of just such an instance. As is the stereotypical expectation from the surname ‘Vakil,’ which translates to ‘lawyer,’ that law may well be its holder’s profession.

This is precisely why a growing band of renegade parents are going against the grain in naming their children. They’re knocking down stereotypes, challenging tradition-steeped beliefs, and taking a stand – all through choosing a baby name.

For Shamin Vaz Saldanha, a 38-year-old Goan Catholic mother of two, naming her children was a political statement. “During the rule of the Portuguese, many Goan families deliberately gave their children Hindu names to show allegiance to India,” she explains.

It’s why her own parents named her Shamin, and why she and husband Halford later chose to name their boys Aaryan and Sidhharth.

“Our community in Goa generally sources names from the Bible, which originate in Hebrew or Latin. So whenever I’m asked why we’ve chosen Hindu names for our boys, I reply, ‘They’re Indian names, and that’s who we are,’” she says.

Nationalism also seems to be the reason for 28-year-old Namrata D’Souza’s multicultural name.

“My father, who was active in church and eventually became a deacon, gave my brothers, Sushant and Abhijeet, and me, Hindu names,” she says. “He would say, ‘We’re Indian first, Catholic second.’ But I also think it’s because we live in a largely Maharashtrian community in Mumbai’s suburbs.”

So while patriotism played a part, Namrata’s parents may also have wanted to ensure their children assimilated easily into society, a common concern in baby naming, as this American study shows.

And although it’s common for parents to choose baby names they believe will help their children fit in, doing so assuming a need in the distant future isn’t as common. But that’s what Nikhil and Chhaya Gandhi decided to do. The Hindu couple chose to give their daughters the very un-Hindu names Simone and Monique.

“They are now freshmen, studying in the UK and Australia respectively,” Nikhil says. “I think their multicultural-sounding names will be an advantage to them abroad.”

And then there’s the case of mixed-culture families, where couples who marry outside of their religion or caste face the dilemma of which communal identity to carry forward in the names of their children. Some choose a baby name that blurs all lines.

Manasvi Savla is a Gujarati who married a conservative Kachhi and is now mother to a toddler. She chose to name her son Rihaan, knowing that the name passes as Hindu, Muslim, and Parsi.

“My husband Nirav wanted the traditional name Rajveer, but I was positive I wanted something that blurred the boundaries of religion and caste, like our marriage did,” she says.

Another example is the family of Priti Prabhune, a Roman Catholic, and her husband, Prashant, a Maharashtrian who converted to Catholicism for her. Priti was actually named Dona before marriage, but legally changed it afterwards because her mother-in-law couldn’t pronounce her original name. “Priti means love and that’s what I stand for,” she says simply, “but I’m still known as Dona to everyone else.”

She went on to name her children, now in their 20s, Pritesh and Pratika.

“Their names are amalgams of ours,” Priti explains. “We raised them Catholic, but Pratika has always been a rebel,” she continues. “She prefers certain Hindu rituals. Prashant still visits the temple sometimes too. We accompany each other. Our family is a democracy. We respect and support each other’s individuality.”

And that is, perhaps what baby name choices are about most: a statement of individuality that says more about parents — their hopes, dreams and values for their family — than the children who bear the names.

“Multicultural names reflect the parent’s wish for their child to be a global citizen,” says Rima Shah, a clinical psychologist who practises in Pune.

Which means the new generation of Indian names carries as much, if different, baggage as older naming traditions, such as those of Islamic communities in which religious leaders choose baby names rather than parents.

“When I was born, the name my mother chose for me was rejected by our religious head. I ended up with a name chosen from the list he gave my parents,” says Maad Tinwala, an orthodox Bohri Muslim in his 30s. “When my daughter, Batul, was born, we followed the traditional path, too.”

It isn’t just certain Indian communities that regulate baby names. There are many countries whose governments veto certain names, too, in a bid to ensure children don’t grow up suffering from inappropriate one. It’s a possible, though uncommon fallout.

“In my 20 years of practice, I have yet to come across a case where the name has a negative or a positive impact on a child’s personality,” says Shah, the psychologist. “What I have found is that a child’s self-esteem, if fragile, can be impacted by anything. It’s important to inculcate a strong sense of self.”

Shah says baby names are not necessarily a life sentence. “I have come across cases of children growing up and changing their names,” she says. “So, no permanent damage done.”

By that logic, baby name rebels and conformers can both rest easy — and leave the truly outlandish choices to celebrities.