In the therapy room, Kim* remembers always sitting on the edge of the chair, feeling tense and uncomfortable. As a non-binary person trying therapy for the first time, there was already a lot going on in their mind. But one thing constantly bothered Kim. “I find it difficult to articulate my thoughts in English.”

Kim’s experience resonates with many queer individuals who do not feel that English is the best language for them to express their thoughts.

Growing up in Kerala, Kim was more comfortable speaking in Malayalam. And so, as an 18-year-old exploring their gender identity, they set out to find an open-minded therapist who could converse in Malayalam. However, the only response they received from everywhere was that it was very difficult to find such a professional.

Unnati Bhardwaj, a non-binary person who is a practicing counseling therapist, confirms that queer affirmative therapists conversant in regional languages are hard to come by, as most mainstream training in Psychology (including queer-affirmative therapy) happens in English.

Eventually, when Kim decided to settle for an English-speaking, queer-affirmative therapist, they found that “talking to [the] counselor and thinking about what needs to be shared in the session used to make me feel tense,” Kim says.

According to Arpita Kanjilal, who has a doctorate in Applied Linguistics, “the frameworks are mainstream, the culture is mainstream. So, the terms of references, and everything, therefore, is mainstream. By ‘mainstream,’ I mean the idea of the binary world that we live in.”

Lack of queer-affirmative expressions is graver when it comes to vernacular languages than in English. Most vocabulary to express queer ideas exists only in “certain kind of English” and not in any vernacular languages, says Arpita. The impact of this limitation can be felt acutely in therapeutic settings.

“Talking to someone in a therapeutic setting who seems to get what you’re trying to say and even describes it accurately, can catalyze a shift in our emotional state. Now this is the importance of language in the general sense.”

A lack of feeling comfortable within a therapeutic setting can lead to queer individuals feeling further isolated and becomes a constant reminder that they live in a world that wasn’t designed for them.

Research has found that depression and suicide rates in queer individuals in India are significantly higher. A comparison with the World Mental Health Survey revealed that suicidal rates in the queer population in India is 7–14 times more than that in other developing countries.

Arpita talks about how language, an expensive and elite form of expression, is not a monolithic category. It is enmeshed within intersections of caste, class, and other social hierarchies that determine how people articulate their relationships and experiences with society.

An individual’s socioeconomic condition shapes a large part of their life, including the language they speak. The readily available language system is patriarchal and is confined within mainstream ideological boundaries that restrict everyone. However, these restrictions vary based on an individual’s social hierarchies.

A nationally representative sample survey conducted by Lok Foundation-Oxford University in 2019 found that 41% of people from higher-income categories are able to speak in English as opposed to less than 2% of people from lower-income groups. An upper-caste person is more than three times more likely to know English compared to a person from the Dalit or Adivasi communities. These factors directly correlate with an individual’s ability to access mental healthcare.

Jhisha is a Bahujan trans woman from Northern India who did her schooling in a vernacular language. She wonders how she will explain her gender identity to her parents who don’t know English. “Maybe they don’t even know the Hindi words that exist [for queer people], except the abuses and slurs,” she laments.

Jhisha, born in 1996, talks about how she neither knew English nor how to use the internet until 2013. As a result, she only learned how to express her own gender identity when she started using social media in 2016. Sometimes, she uses Google to translate queer vocabulary from English to her native language. But in conversation, these native words often escape her memory and, when she does remember them, people don’t understand. Jhisha feels that is perhaps because the slurs for various gender- and sexuality-related concepts are more popular than the formal words.

But using a slur for herself is not an option for Jhisha and many others like her.

Arpita says that all languages contain explicit forms of transphobia, queerphobia, and other forms of oppression. For example, according to psychology, a transgender person not conforming to the sex that they were assigned at birth is a fantasy and not the truth. Such ideas then filter and morph through systems to take root within everyday language. Thus, the impact of language as a system within the cis-heteronormative structure needs to be challenged, says Arpita.

The trans position poses a threat to the normative arrangement of the society, which includes language. “Language in itself is a medium of violence. Language as a system is codified in gender binary and is therefore exclusive and violent,” she says. Violence cannot be separated from language to understand the impact that language can have. “Language is a part of the binary world which reflects all the aspects of it,” she adds.

Unnati says that people with no prior experience of therapy or exposure to a language can be afraid of the humiliation they may face in a therapeutic setting. They say: “It can be life-saving to establish the idea that our clients do know what they’re talking about especially when they’re talking about themselves” – regardless of the language it is expressed in.

For example, when Unnati’s encountered a client who wasn’t aware of the existing vocabulary for what they were trying to articulate, they found that breaking down concepts to confirm that particular terms accurately reflected the client’s feelings have them a sense of relief and helped them feel less like an anomaly.

Similarly, when speaking to a person online who was indicative of being queer but didn’t speak English and had no knowledge of queer vocabulary, Jhisha tried to break things down to help them understand the terms that closely represented them. But she found it “very difficult to explain things to them” in the vernacular language.

Kim experienced something similar too when they had to resort to the vernacular language to speak about gender and sexual identities with a friend and at their workplace.

According to Unnati, given that every language in the country has several distinct dialects, the language barrier can be a “tough nut to crack.”

However, hope lies in the fact that queer communities across the world have always creatively explored the dynamics of language and adapted themselves against cultures that seek to uproot them. Speaking of Hijra Bhasha, a lexicon built by the Hijra community in a world that lacks terminologies and references for them, Arpita explains how this lexicon is used to defend and protect themselves. Their lexicon, “which the mainstream world cannot fathom,” has been used over generations to strengthen the community and overcome societal barriers.

Unnati says that having vernacular, queer-affirmative therapists can make acceptance more accessible to queer people. At the same time, it’s important to note that “Language is a site of struggle, and there is a constant struggle that happens within language,” according to Arpita. Overcoming the barriers of language is a continuous process like any other aspect of our everyday social life.

*Names are changed to protect anonymity.

**An earlier version of this piece referred to “a certain school of psychoanalysis.” A clarification has been made to this quote at the request of the source. 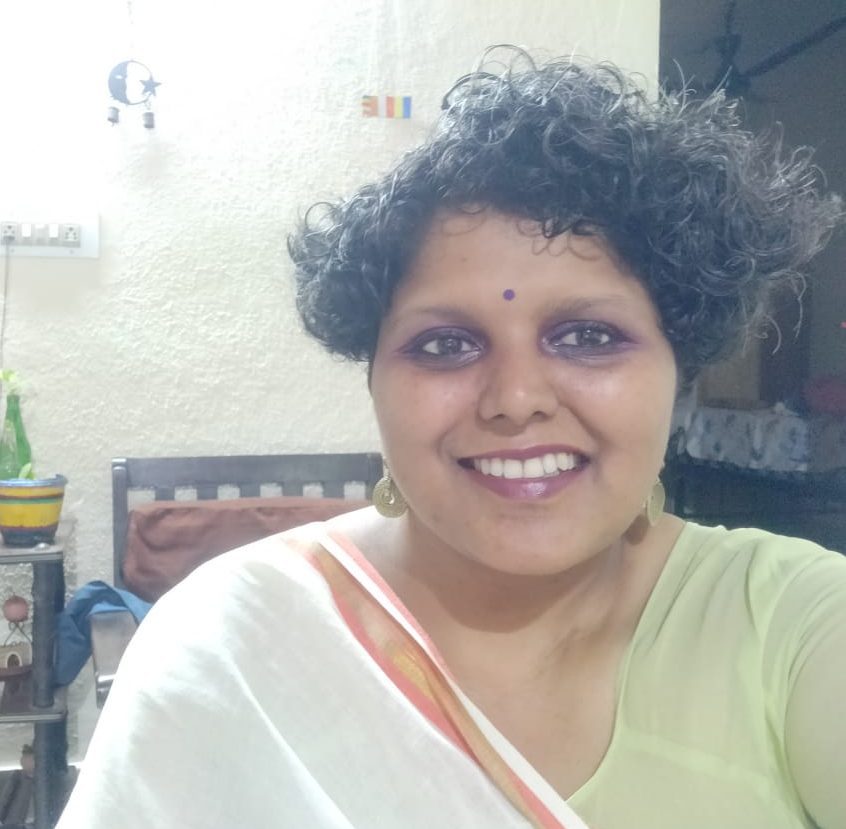 Geet is a sexuality educator working with adolescents on social-emotional learning using Expressive Arts Therapy. They are a storyteller and a theater artist trained in Theater of the Oppressed and Playback Theater, currently pursuing an M.A. in Psychology.

See all articles by Geet