The Oceans Hold Nearly 26,000 Tonnes of Plastic Waste From Covid19 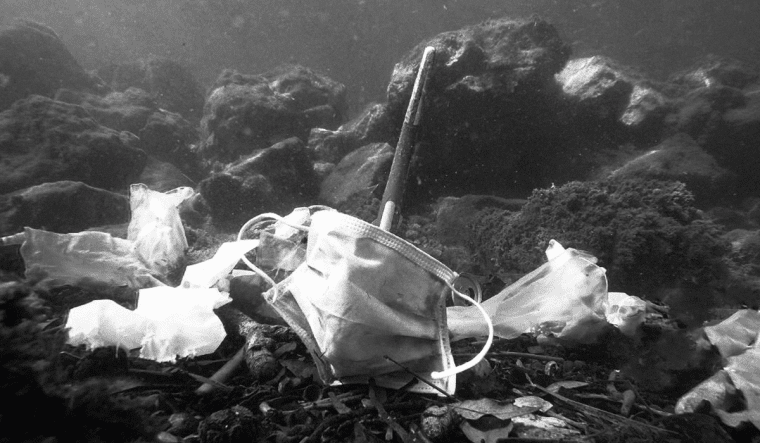 PPEs, masks, and gloves — weighing almost as much as 2,000 double-decker buses — have made their way to the ocean beds.

Published in Proceedings of the National Academy of Sciences, a new study has found that almost 26,000 tonnes of plastic waste from Covid19 is sitting at the bottom of many of the world’s oceans. 46% of the waste originated in Asia, followed by Europe at 24%, and the Americas at 22%.

This finding is an alarming reminder of how disruptive the pandemic has been to nature. As of today morning, with 7.3 billion doses of Covid19 shots already administered across 184 countries, the novel coronavirus’ threat to humankind may be declining. In the meantime, its threat to the ecosystem continues to loom large.

“The Covid19 pandemic has led to an increased demand for single-use plastics that intensifies pressure on an already out-of-control global plastic waste problem… The released plastics can be transported over long distances in the ocean, encounter marine wildlife, and potentially lead to injury or even death,” the study notes.

This concerns India too. According to a report the Ministry of Environment submitted to the Rajya Sabha in March this year, the country is generating nearly 146 tons of biomedical waste due to the Covid19 pandemic. The waste includes surgical masks, gloves, and other medical equipment like syringes, razor blades, and IVs.

“There [are] risks [of there] being more masks [in the ocean] than jellyfish,” the World Economic Forum (WEF) quoted Laurent Lombard, from the French clean-up charity Opération Mer Propre, as saying. The WEF also reported that last year, between the end of February and mid-April, more than a billion items of PPEs were given out in the U.K. alone — with “millions of gloves and masks being used then thrown away every single day just in U.K.’s healthcare settings.”

Animals — even birds — have already begun getting entrapped to death in masks and gloves. Ingesting them, too, could easily be fatal for many species. So far, several individual instances of deaths in animals due to entrapment or ingestion were recorded from across the globe. There could be many, many more.

“The plastic debris could also facilitate species invasion and transport of contaminants including the Covid19 virus,” the study points out. Given that experts believe the novel coronavirus may have made its way to humans through bats and pangolins, it might not be wise to dismiss the possibility of humans spreading it to other species through waste. In fact, scientists already suspect humans have transmitted the virus to white-tailed deer in the U.S. — sparking concerns about what that could mean for mankind.

“There is the possibility that viral mutation in a reservoir host, such as white-tailed deer, could lead to new variants of the disease. These variants may lead to greater infection rates, increased virulence (severity of symptoms), and prove more effective at evading the human immune system. Likewise, any reinfection from wildlife reservoirs could also complicate our long-term efforts to fight and suppress the disease,” wrote experts from the Bangor University in the U.K., who have been researching the subject.

The solution? Better waste management practices, according to the study authors. Otherwise, “at the end of this century… almost all the pandemic-associated plastics end up in either the seabed (28.8%) or beaches (70.5%),” the study warns.