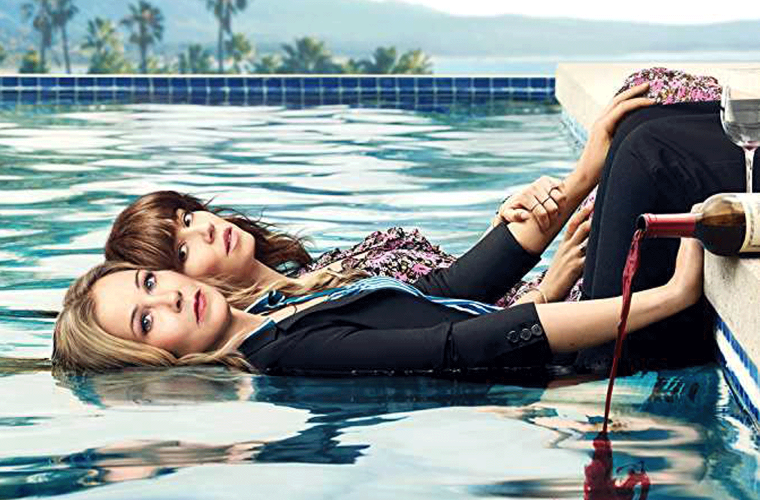 In trauma-comedy Dead to Me, Jen (Christina Applegate), a hard-nosed grieving widow with an anger problem, fulminates against the abandon with which we call people “nuts.” Let’s not call anybody nuts anymore, because men use it to undermine women all the time, her character, Jen, declares. A heartbeat or two later, she spots a car that has been speeding in her neighborhood (she has a thing against road rage), and smashes the shit out of it, as Judy (Linda Cardellini), watches from the shotgun seat, mouth agape. “Get in the car,” she frantically whispers, as the owner runs out. Jen cackles and gleefully drives them away.

That’s Dead to Me in a nutshell — a complicated, tenuous friendship that endures past abusive men, relationship-compromising lies, a fatal hit-and-run, and bursts of unruly behavior. Jen and Judy’s relationship betrays an understanding and forgiveness that a viewer inclined to sort things into ‘good and bad’ might consider problematic, but that the parties involved evaluate through a nuanced understanding of grief and its effects.

Jen, whose husband died in a hit and run, is desperately trying to find a balance, one that is replete with angry outbursts, insomnia, and watching reruns of Facts of Life. Her partner in crime is Judy, a rueful, eccentric artist who is dealing with losses of her own — a cocky, rich, almost-criminal ex played to perfection by James Marsden, and five miscarriages. Spoiler: Judy also happens to be the driver who killed Jen’s husband (don’t worry, you find this out at the end of the first episode, if that at all helps your indignation toward me). What unfolds is a 30-minute-each 10-episode unfurling of Jen and Judy’s tumultuous friendship, where the creator of the show, Liz Feldman, slowly unravels the secrets of the two protagonists.

“So much of what you see on television is written from a male perspective,” Feldman told The Advocate. “I wanted the show to be seen through a female lens, from a female perspective, because that’s who I wanted it to be for.” And that’s exactly what it is. In an age when the male writers of Game of Thrones are being condemned for ruining the powerful femme trope in the character of Danaerys Targaryen, shows like Dead To Me are a welcome respite. The show excels in its portrayal of nuanced relationships between two women, in its depictions of protagonists’ warring, contradictory behavior. It also does away with toxic tropes of jealousy, power misuse and suspicion that too often accompany strong female leads in popular culture.

Dead to Me also attempts, and succeeds, to do justice to medical issues that are specific to women, such as miscarriages and breast cancer, with an understanding that can only come from a female writer who has experienced them in some way. (Feldman told The Advocate she conceptualized the show when she was herself going through fertility struggles). For example, when Judy attempts to brush off the grief she feels from undergoing a miscarriage, Jen checks her, saying, “Well, I think it is an actual thing. But you heard a heartbeat. And you fell in love with that heartbeat.” Or, when Jen opens up to Judy about getting a preemptive double mastectomy and how her dead husband’s lack of desire for her body made her feel disgusting. Or, when Jen urges Judy to move past her toxic relationship with the seemingly guileless James Marsden, but in the supportive, blameless way that doesn’t make ‘what-you-should-do’ advice cringe-worthy. Feldman succeeds in building her characters bigger than their trauma, while also giving due attention to the ways in which trauma shaped their bigger selves. Her characters are not linear, but complex, thriving women who exist on a spectrum, making it difficult to predict the show’s already dubious trajectory.

The Case For Platonic Intimacy

Another satisfying aspect of Jen and Judy’s friendship is the underlying romance, which fans have interpreted as homoerotic, in part because of Feldman’s own homosexuality. Cue when Jen assures Judy she won’t be alone and promises the two could be a “mothering team,” which was followed by a heartwarming forehead touch. When asked by The Advocate about their romance, however, Feldman said, “There’s a romance in [Jen and Judy’s relationship], and I don’t see that often portrayed in friendships, especially female friendships on TV or in film. But it’s so often that female friendships are laced with this, like, cattiness or the competition, and I wanted to show the true heart connection that you can have in friendship.” Not to say that the relationship is perfect — despite the constant support and non-judgment they grace each other with, sometimes Jen and Judy seem to engage each other’s worst instincts, which, to digress from my praise of the show, feels removed from reality. While as a viewer you’re supposed to laud their unshakeable faith in each other, you do come to question their choice to support some of the more toxic decisions — after all, friendship is not about blind support, and sometimes you have to call your friend out on their shit.

Getting past the minor nitpick, another agreeable aspect of the show is that it’s not just Feldman’s brain that concocted the duo that is likely to achieve Killing Eve-esque fame; every episode of the show has been directed either by a woman or a gay man, with one straight man on the team, Feldman told The Advocate. She describes the show as “an ode to women,” and may I just say, I’m all ears.

By My Lady | film and TV | friendship | grief | trauma