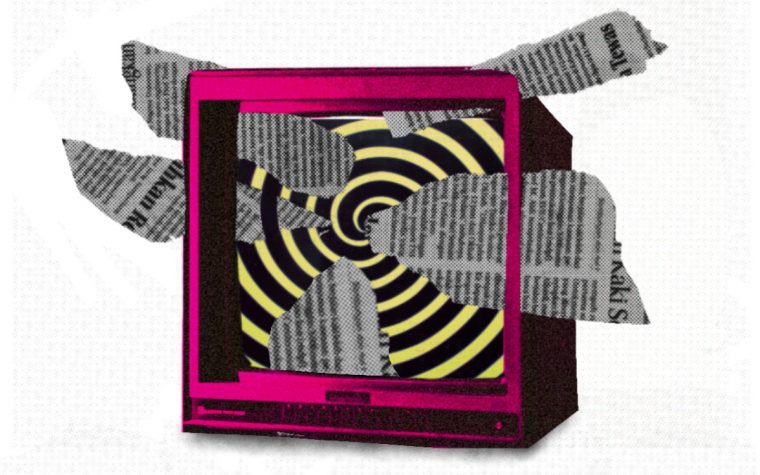 Two different patterns of news consumption emerged in 2020, almost on opposite ends of the spectrum. The first one is disengaging and disconnecting from traumatizing news as a result of crisis fatigue; the second is doomscrolling — a tendency to endlessly scroll through bad news, as though one is addicted to it. A recent study investigated the impact of the latter, colloquially termed “news addiction,” on people’s health.

We’ve known that being constantly tuned in to news is linked to stress, depression, anxiety, and poor emotional well-being, in general. But the research also found that an unhealthy obsession with news impacts us physically, too. Published in the journal Health Communication this week, the study found that besides taking an emotional toll, a rapid onslaught of depressing news can lead to sleeplessness, fatigue, pain, poor concentration, and digestive issues.

“For these individuals, a vicious cycle can develop in which, rather than tuning out, they become drawn further in, obsessing over the news and checking for updates around the clock to alleviate their emotional distress, But it doesn’t help, and the more they check the news, the more it begins to interfere with other aspects of their lives,” noted first author Bryan McLaughlin, associate professor of advertising at the College of Media and Communication at Texas Tech University.

“Witnessing these events unfold in the news can bring about a constant state of high alert in some people, kicking their surveillance motives into overdrive and making the world seem like a dark and dangerous place.”

The impact of the pandemic may have substantially lessened now, but the continuation of the crisis — with the ongoing Russia-Ukraine war, mass misogyny against female survivors of abuse, climate change, and daily stories of oppression and injustice — is far from over. Weaved within our engagement with social media, then, doomscrolling appears to have made its way into 2022. Extensive social media usage was already associated with poor emotional health and increased feelings of loneliness. News addiction in this era of crisis has amplified its downside to a whole other level in this era of crisis.

The researchers analyzed data from a survey of more than 1,000 U.S. adults to reach their conclusions. As part of the survey, the participants answered the degree to which the following statements applied to them: “I become so absorbed in the news that I forget the world around me”; “My mind is frequently occupied with thoughts about the news”; “I find it difficult to stop reading or watching the news”; and “I often do not pay attention at school or work because I am reading or watching the news.”

Among those surveyed, 16.5% showed signs of “severely problematic” news consumption — or, basically, doomscrolling. Unsurprisingly, almost 75% of the doomscrollers reported struggling with poor mental health, while more than 60% of them admitted to experiencing physical symptoms as well. Compare it with these numbers: among non-doomscrollers, only 8% reported dealing with mental health issues, and 6% with physical ill-being.

And, as it turns out, the study hasn’t even captured the entire extent of physical ailments news addiction results in. The number could be much higher and more prevalent, given the limited dataset of the current study. Besides, constant engagement with the news can impact physical health by virtue of how we read, too — we’re keeping our eyes affixed on screens, almost always in bad posture.

So, according to Dr. Fabian Almeida, consultant psychiatrist at Fortis Hospital in Kalyan, Mumbai, the physical impact of doomscrolling isn’t just stress-related. “[W]ith a constant neck flexion position [that scrolling for long hours entails], the cases of cervical spondylosis have increased. Also, constant sitting has given rise to posture-related issues and joint arthritis. Diseases like carpal tunnel syndrome, obesity, and vision issues have increased substantially in the last two years as statistics have revealed; increased exposure to radiofrequency waves have increased the incidence of brain tumor as well,” he told Indian Express in May.

“Our bodies can’t sustain that level of nervous load. Things start to fail, the wheels start to fall off. We experience a whole host of consequences,” Adrienne Heinz, a clinical research psychologist at the National Center for PTSD in the U.S., had explained in 2020 while the global population was grappling with one of the worse health crises in history. “Right now we’re seeing an uptick in national anxiety and depression. You start to see insomnia, relationship distress.”

It is, undoubtedly, important to stay informed. Not doing so, “undermines the existence of an informed citizenry, which has implications for maintaining a healthy democracy. This is why a healthy relationship with news consumption is an ideal situation,” as McLaughlin notes.

But being emotionally devastated by the culture of crisis we’re presently caught in, helps no one. The objective is to strike a balance by being informed, but not overwhelmed. Even the World Health Organization had advised people to “minimize watching, reading, or listening to, news about Covid19 that causes [one] to feel anxious or distressed” during the pandemic.

As Karestan Koenen, a professor of psychiatric epidemiology at the Harvard T.H. Chan School of Public Health, had said a few years back: “We all need to turn off the media at times.” That appears to be the only way to exist in the digital age that is, unfortunately, riddled with unending crises.