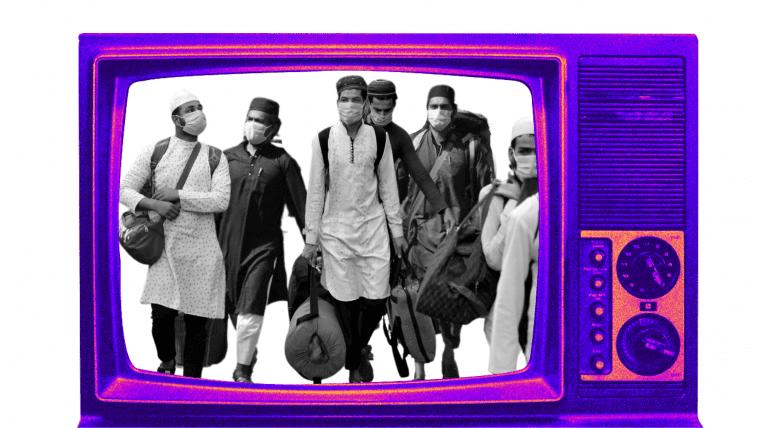 The News Broadcasting Standards Authority (NBSA), a regulatory body for TV channels, has directed Aaj Tak to remove certain broadcasts that linked the Tablighi Jamaat to the spread of Covid19. The content in question aired on April 4 and 5 of last year, as part of a show called “Desh Tak,” currently available on Aaj Tak’s Youtube channel and website.

In a statement put out on June 16th, the NBSA said that Aaj Tak’s reports were in violation of Section 153 of the Indian Penal Code (promoting enmity between different groups). The news body further pointed out that several “innocent” calculation mistakes in Aaj Tak were repeated frequently, and no attempt was made to correct or publicly acknowledge these faults.

Their statement comes in response to a complaint that stated Aaj Tak attempted to “develop hatred in the minds of the people against a particular community” amid the Covid19 pandemic. The NBSA has also fined two Kannada news channels and censured English news channel Times Now for its biased coverage against Tablighi Jamaat recently — after taking cognizance of a 2020 complaint from volunteer group Campaign Against Hate Speech.

Arguably, it is clear the NBSA’s statements come far too late. The Tablighi Jamaat, a Sunni Muslim sect, held a mass gathering in March last year, creating a superspreader event. Several media channels reported on this event from a biased, communal perspective, triggering outrage among people and leading to increased fear and Islamophobia.

Notably, the NBSA did not take proactive action against Aaj Tak — and instead waited for a complaint from a civilian before finally releasing a statement an entire year later. This, even though the NBSA’s objectives include, Fostering and encouraging the growth of a sense of responsibility and public service among all those engaged in and associated with the profession of television journalism and business of broadcasting.”

This failure to act swiftly against a polarized environment during the pandemic also reflects in the Supreme Court’s handling of the situation. The Court criticized the biased media coverage in January 2021, several months after the coverage had happened, and finally made statements critical of the central government for not intervening before.

One Year Later, Are We at Risk of Forgetting the Lessons We Learned During the Pandemic?

The damage was done and left to percolate for months. An audit of Tablighi Jamaat coverage published in Newslaundry shows that news platforms platformed conspiracy theories ranging from the sect’s poor hygiene habits to an intentional infection war called “corona jihad.” The consequences of these conspiracy theories are continuing — real-world acts of violence including hate speech and slurs faced by the Muslim community in India.

A report by activist association Bebaak Collective further stated: “Bearing Muslim identifiers had consequences on access to immediate relief. Muslim migrants hid their names, while others who didn’t were denied rations, and the stereotype of Muslims as ‘virus carriers’ was used to stop donors from distributing relief materials,” as a direct consequence of the Tablighi Jamaat coverage in India.

Further, there was also vindictive action by the state. The Centre prohibited entry of more than 2,500 Jamaat members for 10 years, after reports from state governments, alleged that members were illegally living in mosques and seminaries. Several court cases were filed against people who attended the congregation, for reasons ranging from visa violations to violating Covid19 guidelines.

Though courts like the Bombay High Court squashed several of these FIRs, the damage to the safety of India’s Muslim minority, and their mental health, still continues.

In the current statement, the NBSA notes: “The media has complete freedom to report on the Covid pandemic; however, such reporting must be done with accuracy, impartiality, and neutrality, keeping in mind the issue that is being dealt with is sensitive in nature.”

This statement, issued last year, might have made a difference. Now, it rings hollow.