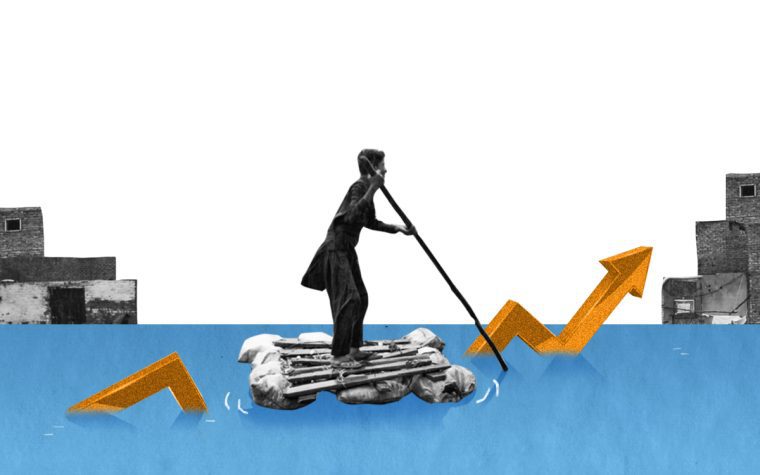 Pakistan is reeling under unprecedented floods since June. Though floods are not uncommon in the region, the current wave is exceptionally severe and has led to the loss of over 1,100 human lives and 7,50,000 livestock. Close to a million houses have been damaged, with several of them being destroyed completely. 33 million people have been affected so far, and one-third of the country lies submerged.

Ahsan Iqbal, a minister in Pakistan’s national cabinet, told Reuters that the floods, triggered by melting glaciers and an eight-fold increase in rainfall, caused damages upwards of $10 billion. He additionally called upon richer countries to aid Pakistan in this moment of crisis, placing the blame of the catastrophe on climate change. “Our carbon footprint is (the) lowest in the world,” Iqbal said. “The international community has a responsibility to help us, upgrade our infrastructure, to make our infrastructure more climate resilient, so that we don’t have such losses every three, four, five years.”

Listed in a joint report by the World Bank and the Asian Development Bank as being in one of the most climate vulnerable zones in the world, Pakistan is dealing with the disproportionate brunt of the ongoing global climate crisis. It didn’t have to be this way, and critics are pointing to a school of thought that explains how this happened.

Anthropologist Jason Hickel, a key proponent of the degrowth movement, highlighted its emphasis on redistribution and accountability by tweeting about the Pakistan floods: “Pakistan is a climate creditor, and the government should issue an official call for reparations for loss and damage from the overshooting countries, in proportion to their share of overshoot.”

This highlights the global disparity between rich nations that have historically been the most responsible for driving climate change, and poorer countries like Pakistan which bear the consequences of it despite contributing very little to it themselves. Geographically, the economies of the world are divided into the global north and the global south — referring to patterns of wealth and resource distribution. One way in which environmentalists have attempted to address this disparity is through proposing a radical social and economic movement: “de-growing” the economy, and “decoupling” economic growth from the use of natural resources.

Economic degrowth as a theory argues that the current growth-centric model of economics is unsustainable for the planet, and suggests an alternative model of development. It suggests that instead of singularly focusing on the growth of the economy, the world should now instead try to shrink economies to sustain the planet and halt climate change. In practice, it means that the world should move away from the use of Gross Domestic Product as a marker of development or progress since it only focuses on the exchange of resources and products and does not focus on other aspects of development and growth in terms of human and environmental well-being.

Centered around the principles of humanism, equitable distribution of wealth and resources, and Buddhist Economics, economic degrowth emphasizes living sustainably without waste and cutting down on consumption for consumption’s sake. It suggests a series of changes in both individual lifestyles and existing political and economic systems to support a model of living that can halt the earth’s current rate of warming and depletion of natural resources. This would require completely shifting the way we think about a country’s progress: if we measure it in terms of money and resources now, degrowth asks us to consider that they don’t translate into progress for everyone.

For instance, supporters of the degrowth movement suggest people could substitute some amount of meat in their diet with vegetarian alternatives or stop relying on fast fashion and instead opt for clothes that last much longer. They also point out how industries are designed to be unsustainable. One example that degrowth supporters cite in this regard is the planned obsolescence of technological and electronic products. In a 2021 interview, Hickel told Vox, “If our washing machines, fridges, and phones lasted twice as long, we would consume half as many (thus the output of those industries would decline), but with zero reduction in our access to those goods.”

But most importantly, proponents of degrowth also emphasize the redistribution of resources on an international scale. They highlight how large economies like developed first-world countries are responsible for a large part of the world’s waste, while low-income countries do not even have enough to live respectably. Degrowth supporters propose that there must be a limit to economic growth, and suggest that higher-income countries that have already crossed that threshold shrink back to the limit while low-income countries can simultaneously grow to the same level. They maintain that people from all across the globe should have access to a living wage and a minimum standard of living.

Critics of degrowth have called the movement too romantic, too utopian, and too late. They point out that while the GDP may not be the most accurate tool to assess human development, usually more economically developed countries also perform better on human development markers such as education and healthcare. Finally, they question the movement’s authority to pass on value judgments on people’s consumption patterns: what might seem a frivolous luxury to someone could be an essential need to someone else.

Those opposed to the idea of degrowth highlight that there isn’t enough time to restructure the global economic order, hence what has to be done to address the climate crisis must be done while remaining within the capitalist system. In an Op-ed criticizing, economist Andrew McAfee noted that “rich countries have reduced their air pollution not by embracing degrowth or offshoring, but instead by enacting and enforcing smart regulation.”

Technological solutions like solar panels, wind energy, and electric vehicles can help reduce global emissions if backed by enough political will, goes the argument against degrowth. However, those in support of degrowth point out how even these recourses that came as alternatives to dominant modes of energy consumption, have seeped back into the capitalist economy and have largely been inadequate in addressing the root cause of inequality and climate change.

Degrowth emphasizes how the concentration of capital and resources in the global north due to inequitable distribution impacts lower-income countries severely. The movement may be utopian in its vision, but it is significant in highlighting how countries in the global south are disproportionately disadvantaged in the climate crisis, mostly due to the consumption of the global north.