Portal To A Better World? 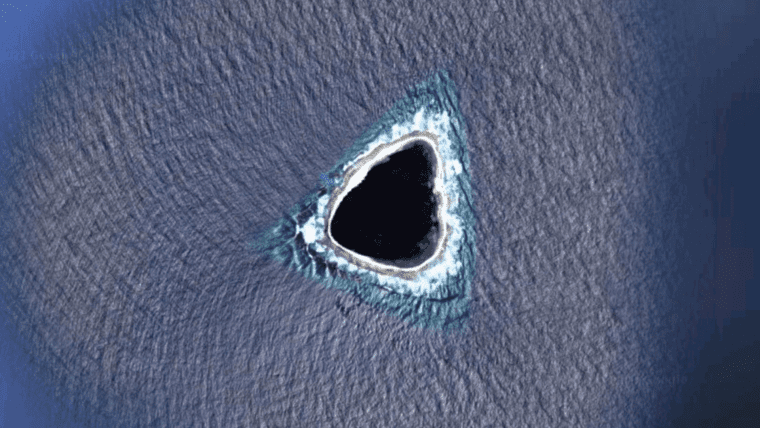 An image of a blacked-out island on Google Maps that has been doing the rounds on the internet. People from across the world are baffled. Is it a black hole in the middle of the ocean? Is it a volcano? Is it a portal to a newer, better world? No one knows.

Many have unleashed their inner sleuths, inner conspiracy theorists, what have you, to try and solve the mystery of what the black, triangular shape in the map refers to.

One Reddit user joked: “God dropped his guitar pick,” while another one suggested: “It’s a little Illuminatti.”

Since the image began gaining traction online, netizens have been putting their theories forward on what the black triangle could be. Some believe it’s a “covered-up” Area 51; some are speculating it’s a portal to another universe (we can’t comment on whether it’s a serious speculation), while some others believe it’s connecting the real world with the fictional universe — by being an island from the TV series Lost.

Jokes (or not) aside, several internet users have been buying into the theory that it’s censored territory. “My first thought was that it’s censored. It wouldn’t make sense for a natural formation to be black like that in such a shallow, small atoll/island,” one user commented.

What Are Blue Holes?

Agreeing with them, another individual built on the theory further, stating that in censoring the area, Google Maps did a botched-up job. “[T]he real answer is the blue color around the island is a painted-in color, so the oceans look uniform in the maps… Islands are added by erasing some of that blue to let the satellite image show through… Sometimes they do a sloppy job. So what you are seeing moving inward is artificial ocean color, real ocean with waves, beach, island,” they wrote.

This theory originates from past evidence of Google Maps blurring “sensitive” geographical locations like military bases, prison courtyards, and well, islands like Moruroa — a tiny atoll in French Polynesia used for nuclear testing.

However, with the image making the rounds, some users pinpointed a specific location on the map. According to them, it’s a representation of the Vostok Island from the Republic of Kiribati, an independent island nation in the central Pacific Ocean consisting of 32 atolls and one raised coral island.

This theory even has an explanation for why the island appears so black — they believe the dense vegetation there has created the “darkness;” zoomed out, the dark green is appearing black.

However, no one in a position of authority or geographical expertise has confirmed this explanation yet. It’s difficult to say whether anyone ever will either. Perhaps, this will remain an internet mystery that got everyone excited for a few days and then fizzled out. Until then, well, let your imagination run wild.