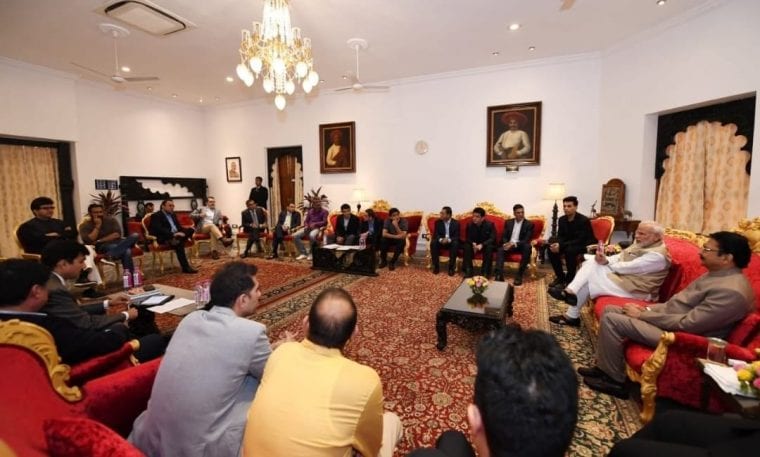 Prime Minister Narendra Modi met with a delegation of Bollywood actors and producers this Tuesday to have what he surmised as ‘a fruitful discussion’ about the entertainment industry and GST for their sector. Among the invited guests were Karan Johar, Siddharth Roy Kapur, Ronnie Screwwala, Rakesh Roshan, Akshay Kumar, and Ajay Devgan. Notice anything?

Even if you didn’t, Twitter did. Lipstick Under My Burkha director, Alankrita Shrivastava, tweeted “Would be great to have female representation in these delegations. It’s 2018.” Others pointed out the host of women working in Bollywood who should have also been invited. But this isn’t the first time Modi has invited an all-male contingent to discuss the industry. In September, Aamir Khan, Rajkumar Hirani, Ritesh Sidhwani, and Siddharth Roy Kapur had a discussion with the PM about how the entertainment industry can contribute to nation building, inviting more rage towards Modi’s apparent disregard for even the optics of gender equality.

Of course Modiji isn’t the only one who has been getting flak for this. In February, Union Finance Minister Arun Jaitley’s all-male budget team was criticized; while in May, a manel at the Indian Council of Medical Research declared that women suffer from high blood pressure because they eat more chaat than men. Just last week, out of 43 panelists — advertised as the “best minds” shaping India’s economy — featured in the Times Networks’ India Economic Conclave, only three weren’t men: Kiran Mazumdar-Shaw, Arianna Huffington, and a robot.

Hey India’s “best minds” I hope u r so offended tht this manel incls only ONE Indian woman tht u will boycott it. The 1 other foreign woman here is @ariannahuff & I hope she raises a stink! And don’t mention the 3rd even if u spot her, she is a Humanoid! #IndiaEconomicConclave pic.twitter.com/jQZWVN2THH

All-male panels, or manels, have been criticized for years as a very tangible, visible proof of sexism across different fields. There’s an implicit gender bias in the way ‘experts’ are selected to represent their opinions or their work in public forums, where women have to work harder and are often way more qualified than men in the same field. The excuses organizations give for not inviting more female panelists and speakers often boil down to claims that there are none qualified — claims that typically mask no effort to find them. A handy manel bingo lists the number of ridiculous excuses people have given in the past.

But despite people pointing out the existence of manels — there’s even a Twitter account dedicated to calling out the phenomenon — it doesn’t look like they’re anywhere near stopping. A survey by an event software company, Bizzabo, found that men outnumbered women 2 to 1 as event speakers over the past five years. Analyzing private sector events in 23 countries, including India, the survey found out of the 60,000 speakers, 69% were male. And despite increased conversations about gender equality the survey actually showed that manels aren’t just an aging norm — they’ve actually increased by 2% in the past two years.

In September of this year, journalist Anoo Bhuyan called out the Skoch Group and its chairman, Sameer Kochhar, for several manels during the company’s Skoch Summit. What ensued was a farcical representation of what happens when sexist men get called out for their sexism. After Twitter users criticized the panels, Kochhar asked them to “recommend” women who would be qualified to participate in the summit and put him in contact with them. Within 24 hours, Twitter users were able to come up with a list of speakers, which Kochhar’s team of people were unable to do. Oh, and then during the conference he decided to complain about this, calling ‘armchair feminists’ anti-national.

“I blame this armchair feminist movement that has by their actions strengthened such forces and probably they are the biggest anti-nationals”- @SkochSameer at 53rd #SkochSummit#SkochAward #DataLocalisation@DhanjalDr @RohanSkoch pic.twitter.com/wGuDqaF7Hm

While the Skoch Group and Kochhar’s sexism is very apparent, the conference also saw men starting to realize their complicity in it. In light of the criticism, many offered to step down and have women take their place. Other men in other manels should also follow suit — or at least make sure gender representation is equal before committing to speak.