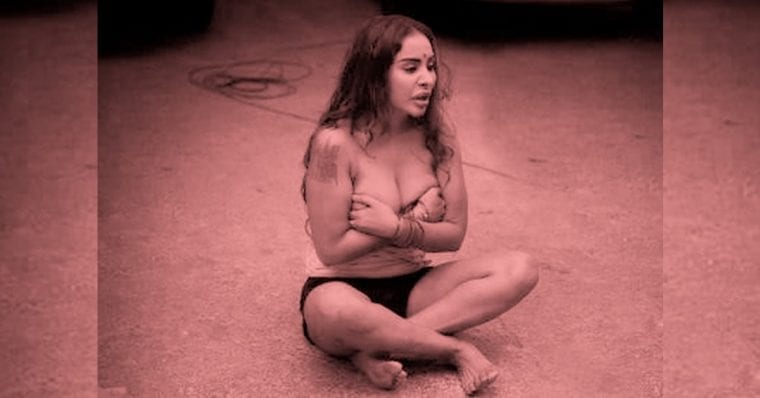 Telugu actor Sri Reddy staged a strip protest in Film Nagar, Hyderabad on Saturday to demand justice for “Telugu girls” who, she alleged, do not receive fair treatment in the Telugu film industry. Shortly after she took her top off, she was detained by Banjara Hills police.

Earlier in the day, Sri Reddy had announced her intention to hold the strip protest against sexual harassment. In addition to her demand that the Telegu film industry’s “casting couch” system be eradicated, she demanded the industry take steps to protect and safeguard women.

She has also made direct allegations against men in the entertainment industry who have harassed her. A few days before her protest, she posted screenshots of a WhatsApp conversation with 2010 Indian Idol winner Sreerama Chandra Mynampati, in which he asks her to come to his hotel and asks her to send him “personal hot pics.” In early March, Sri Reddy accused director Sekhar Kammula of forcing her to have sex with him.

Sri Reddy is one of the few Indian actors who has publicly engaged with the #MeToo movement. Earlier this year, 75-year-old Hindi film actor Jeetendra was accused of sexual harassment by an anonymous co-star, who alleged that the incident took place in 1971, when she was 18 and the actor was 28. Though that victim came forward, actor Kalki Koechlin, as well as a piece in Arré, argued that Bollywood nepotism would make it impossible for the #MeToo movement, or its sister, #TimesUp, to gain ground in India.

It’s worth noting that nepotism isn’t, perhaps, the only obstacle: much of the news coverage around the Sri Reddy incident has been overtly condescending. One outlet referred to Sri Reddy’s protest as “antics,” while The Hindustan Times’ loaded description made the protest seem more akin to an erratic outburst; in their account, Sri Reddy “suddenly started removing her clothes one after the other and then squatted in front of the office half-naked.” (There was nothing sudden about it: She had announced her intentions on social media that morning.)

The grounds on which Sri Reddy was detained by police are unclear; Section 294 of the Indian Penal Code states that committing an “obscene act in any public place” is punishable by imprisonment or fine, but there is nothing explicitly barring public nudity. The law is obscure enough that there is no agreement on what determines an “obscene” act — complaints continue to be filed in Indian courts against kissing in public (once, Richard Gere was involved).

Naked protests are hardly new: In Buenos Aires last year, 120 women stripped in front of the President’s house to protest gender-based violence. A feminist group was founded in Ukraine in 2008 with the specific intent to disrobe in order to protest women’s issues around Europe. In 2002, 150 members of the Niger Delta Women for Justice protested naked to demand that US-American and British oil companies make provisions for Nigerian infrastructure and healthcare instead of simply reaping profits off their land. And in 2004, 12 mothers in Manipur strip protested the murder and possible rape of a young girl named Thangjam Manorama at the hands of the Assam Rifles.

Clearly, women across the world have turned to nude protest when they’ve needed an effective tool to make governments and institutions listen to them. The fact that a woman’s body is often more powerful than her voice, alone or en masse, speaks volumes about the circumstances and norms that typically lead to these protests to begin with.

Another issue that Sri Reddy raised during her protest was her lack of inclusion in the Movie Artistes Association, which announced yesterday that they will not be accepting her application in response to her protest . In the same statement, the association said they will be suspending the memberships of any actors who work with her.

As Wolfgang Kraushar writes in The Globalization of the Naked Protest, “a person willing to present their body in all its vulnerability and immediacy to a wider audience enters a complex area of taboos and prejudice, a charged arena, perhaps even a minefield.” Sri Reddy’s protest was attacked as “attention-seeking,” but if anything, the consequences worked against her career. What she did accomplish, instead, was agency over her own body — a triumph over the film industry that had tried to claim ownership of it until now.