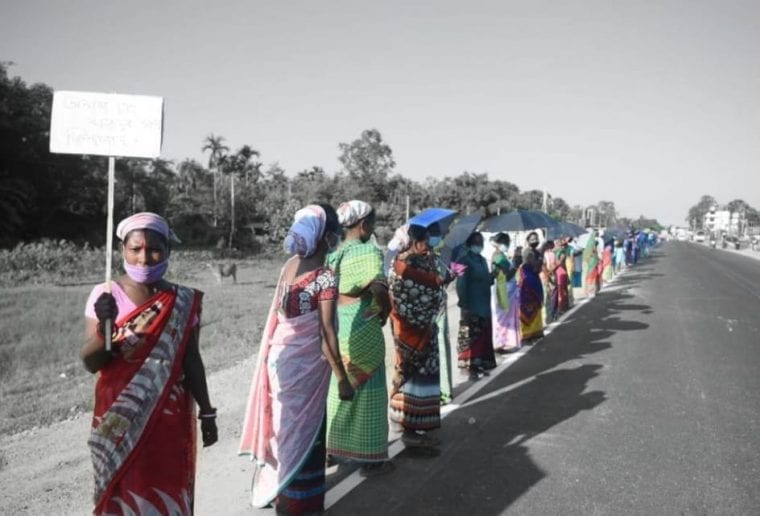 Tea plantation workers in Assam undertook a massive 400,000-person strike last week — halting the operations of approximately 250 tea estates — to protest the failure of the state government to increase their wages, as promised in a 2018 agreement.

Two years ago, the state government had promised to hike tea worker’s minimum wage from 167 to 350 rupees and formed a committee dedicated to improving the compensation of tea workers and the oft-dangerous conditions in which they work. The fruits of this agreement have not manifested, according to labor unions in the area. As a result, the industry in Assam — supplying almost half of India’s total tea leaves annually — has witnessed several protests in the past few years as part of ongoing agitation aimed at spotlighting plantation owners’ exploitation of daily wage laborers, who work in unsanitary environments that often lack clean water, daily rations, and other basic amenities.

Tea plantation workers, the majority of whom are women engaged in leaf plucking, have been severely hit by the economic fallout from the Covid19 pandemic, pushing an already vulnerable group further into poverty. These women already carry a high maternal mortality burden, with those pregnant unable to access adequate health care or nutritional supplements through their job. Those engaged in pesticide spraying have been found to be more vulnerable to contracting tuberculosis and other respiratory complications due to a lack of appropriate protective gear.

“If we don’t get the wage we were promised soon, we are going to launch a more aggressive campaign,” Rupesh Gowala, of a local worker union, told The Guardian, stressing the need to keep the agitation going. In addition to demanding wage increases, workers are also rallying against abuse endemic to the tea plantation industry.

In India, tea may be associated with feelings of calmness, comfort, and belonging, but its manufacturing is rife with human rights violations that need to be dealt with, preferably by better governmental regulation designed to protect workers’ rights and lives. This regulation, however, needs to go beyond simple promises and tackle actual implementation on the ground.