No Justice No Peace

The Mumbai Women Protesting Against CAA and NRC, in Photos 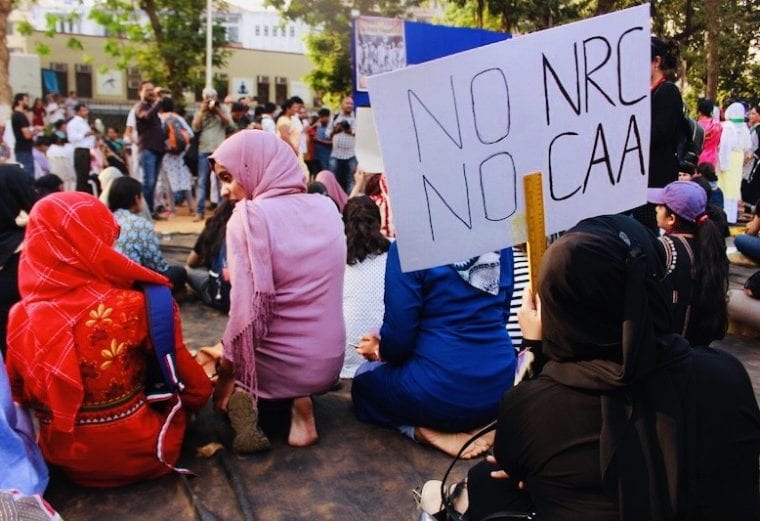 Muslim women sit in the section designated for women, a move by organizers to ensure their safety, at August Kranti Maidan in Mumbai on Dec. 19, 2019. (Image Credit: Rajvi Desai)

On Dec. 19, 1.5 lakh protesters flocked to August Kranti Maidan in Mumbai to have their rage against the Citizenship (Amendment) Act, 2019, and the National Register of Citizens heard, loud and clear, by Prime Minister Narendra Modi and Home Minister Amit Shah. Amid chants of “Modi, Shah fake hai,” (Modi, Shah are fake), emboldened with the designation of krantikari, or revolutionary, bestowed upon them by event organizers, people across caste, gender, and religion voiced their dissent, protected by Mumbai police — a rare moment in India at a time when police forces in other states have cracked down on protestors and detained them, often violently.

The CAA, which allows eligibility for Indian citizenship to foreign migrants belonging to minority religious groups such as Hindus, Sikhs, Christians, Jains, and Parsis — from Afghanistan, Pakistan and Bangladesh — leaves out Muslims from these and other countries. The NRC requires Assam’s residents (for now — the BJP-led government has promised to apply it nationwide) to prove either they or their ancestors were in India on or before March 24, 1971, in order to be eligible for Indian citizenship. The two combined are expected to have disastrous effects on the country’s 200 million-strong Muslim population, many of whom may not be able to produce documents — a feat all the more difficult in a country where digitization of documents hasn’t been a priority in official government operations. When Muslim students at Delhi’s Jamia Millia Islamia university rose up against these policies, the police cracked down on the student protesters, with accounts of sexual abuse against women by the police populating social media and informing the rest of the country’s decision to rise up in support.

At August Kranti Maidan in Mumbai, the women embodied this defiant support.

F.H., 20, whose best friend was stuck inside Jamia Millia Islamia when the police started lathi-charging students, says she’s protesting to fight for her friend and all the women who put themselves at risk in the Delhi university.

“I would lay my life on the line to help her in any way I can. Being here is the least I can do,” F.H. said. “We live in a country where [Muslim women] have to be careful all the time. So what? Agar darr lagta hai, toh lagne do. (Let yourself be afraid.) If it comes to my nation and its people, why would I have to think twice?”

Zahra Shekason, 20, was always sure of her safety growing up; now, she doesn’t feel safe in her own home. Now, she wants to be the person screaming at the police, the person front and center of the conflict that endangers her own safety.

“Men are usually more free to speak up and voice their opinions than women are,” Shekason said. “The last protest I was at, I wanted to make noise, be loud, and chant. But I realized I was waiting for the men to take the lead. I’m not doing that anymore.”

“At Jamia, they didn’t respect women. They need to know they can’t take advantage of Muslim women,” Halima Ansari, 40, says, holding an Indian flag. “Today, the fight comes to Mumbai. Tomorrow, it happens to us. If [women at Jamia] could fight for us, then why can’t we fight for them? We’re fighting for our own country, after all, and we’re fighting for its people.”

“Today, they’re questioning if Muslims are the proper citizens of this country. Tomorrow, they’ll ask who is the right kind of Hindu?” Iqra Qureshi, 20, said. “The government tries to scare us through the police. I’m here to tell them we’re not the kind to be scared.”

“I wear a headscarf and live and travel in local trains in Maharashtra. Many times, people tell me to go back to where I came from. How do I make them understand I’m from here?” Uroosa Rakhange, 24, said. “I have my papers so I’m safe under CAA and NRC. But I’m here fighting for those who are not safe; I’m fighting for my nieces and nephews who might have to face a worse administration if I don’t stand up to them today.”

No Justice No Peace | politics | protests