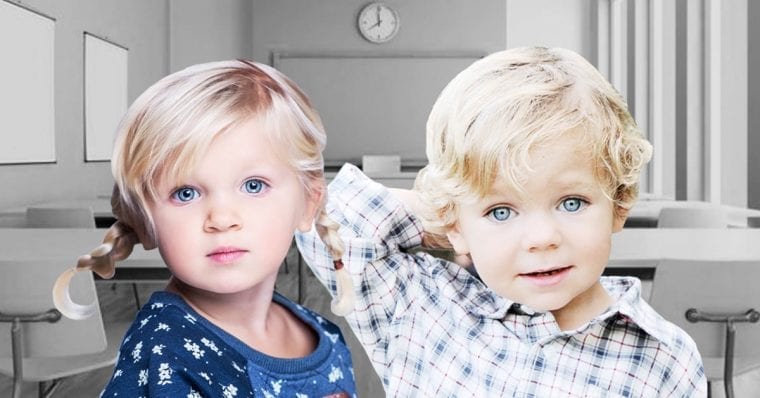 In 1996, Sweden’s experiment with gender neutral preschool began in the small town of Trodje. Two years later, the idea that early childhood education could and should be used to actively subvert gender stereotypes and gender-associated traits had percolated into the national curriculum. It is now common for children to start their education in environments where teachers call them all ‘friend’ or by name, instead of saying “boys and girls”; where girls are coached to say no assertively; where boys are allowed to wear dresses without comment.

Now, a new study on its effects is out. While the conclusion suggests we’re genetically prone to immediately ascribe gender categories to others, it also suggests socialized differences can be mitigated. Compared to children from traditional preschools, children from gender-neutral schools were more likely to play with unknown children of another gender — an important finding since, “young children who favor same-gender playmates develop more extreme gender-typed interests and behaviors over time,” the study authors write, citing previous research. The children from gender-neutral schools also held fewer gender stereotypes (e.g., dolls are for girls).

It seems stark on paper, but the lived result seems more nuanced. Over the years, criticism of Sweden’s system has ranged from accusations of trying to eliminate gender, to “treating gender-conforming children the way we once treated gender-variant children,” as Christina Hoff Sommers wrote for The Atlantic in 2012.

The brief profile of Elin Gerdin, within Ellen Barry’s recent exploration of Sweden’s gender-neutral preschools suggests otherwise. Gerdin, now an adult in her mid-20s, was part of the earliest cohort of children to go through such education. Barry describes her as “conventionally feminine” with long, curling hair.

“This is a choice I have made because this is me,” she said of her appearance. “And this is me because I am a product of society.”

The strongest, lingering influence of Gerdin’s early education seems to be a tendency to call out gender stereotypes when she sees them — like when her friends use blue blankets for their boy babies and pink blankets for girl babies, a practice she says makes her upset.