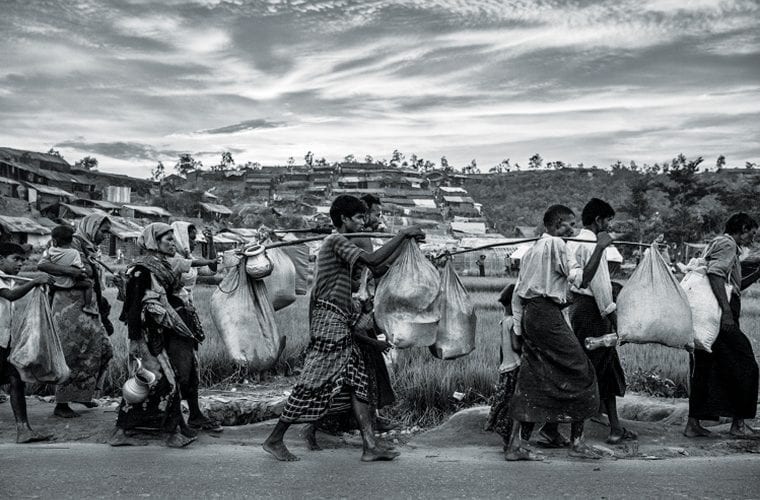 Myanmar’s soldiers “routinely and systematically employed rape, gang rape and other violent and forced sexual acts against women, girls, boys, men, and transgender people,” concluded a UN Independent International Fact-Finding Mission on the 2017 Rohingya violence, according to a report released in New York last week. It called the Rohingya crisis a “textbook example of ethnic cleansing.”

The international organization deemed the sexual violence against Rohingya girls and women by Myanmar’s troops as an indication of the military’s genocidal intent to destroy the mainly Muslim ethnic minority. This was done “by means of killing female members of the Rohingya community, causing Rohingya women and girls serious bodily or mental harm, deliberately inflicting on the Rohingya women and girls conditions of life calculated to bring about the destruction of the Rohingya in whole or in part, and imposing measures that prevented births within the group.”

The report was released just a few days before 200,000 Rohingya refugees marched the streets of Bangladesh on Sunday commemorating what they term Genocide Day — the second anniversary of their exodus into the country. Myanmar was to begin repatriation last week, but refugees are now refusing to re-enter their home country until Myanmar finally recognizes them as citizens, and not illegal immigrants.

A military crackdown by the State in Myanmar’s Rakhine district, home to most of the country’s Rohingya population, began in August 2017, forcing more than 730,000 Rohingya to flee to Bangladesh and live in overcrowded refugee camps. Myanmar continues to deny wrongdoing by state actors; it claims the military action across hundreds of villages was in response to rebellion by Rohingya fighters. The government still refuses to recognize the Rohingya as citizens, rendering them stateless.

In August 2018, another UN report by the same fact-finding committee detailed five indicators of the State’s genocidal intent: the use of derogatory language; incendiary comments made by government officials, politicians, religious and military authorities prior, during and after the violence; discriminatory plans and policies against the Rohingyas; evidence of an organized plan of destruction; and, the vicious brutality of the campaign. “The mission now concludes on reasonable grounds that the sexual violence perpetrated against women and girls that began on 25 August 2017 was a sixth factor that indicated the Tatmadaw’s [Myanmar military’s] genocidal intent to destroy the Rohingya people,” the 2019 report said.

Report: Sexual Violence as a Weapon of Conflict, Vigilanteism on the Rise Globally

According to the recent UN report, “hundreds of Rohingya women and girls were raped, with 80% of the rapes corroborated by the [UN] Mission being gang rapes. The Tatmadaw [Myanmar military] was responsible for 82% of these gang rapes.”

In a press release, mission expert Radhika Coomaraswamy said the report findings also “address a gap that usually surrounds sexual and gender-based reports – cases of sexual violence against men and boys and transgender people.”  Most assaults reported were directed at women and girls who endured beatings, cigarette burns, knife wounds, rape and sexual slavery on military bases. However, the report also recorded accounts of rape, forced nudity and the sexual torture of Rohingya boys and men.“For the first time in such a UN report, we are clearly highlighting violence against transgender people,” said expert Christopher Sidoti. “We spoke to transgender Rohingya women, and found they are victimized twice, because they are Rohingya and because they are transgender.”

The UN investigators were not allowed entry into Myanmar; instead, they conducted a fact-finding mission by traveling to Bangladesh, Thailand, and Malaysia to meet refugees, aid groups, think tanks and intergovernmental organizations working to resolve this humanitarian crisis. Speaking at a news conference in Myanmar on Friday, a day after the report released, military spokesperson Major-General Tun Tun Nyi called the accusations made by the UN, “groundless” and based on “talking stories,” as reported by Reuters.

Speaking to Al Jazeera, Coomaraswamy said the Tatmadaw regularly used sexual violence as a military tactic, “but in the Rohingya areas, it was extremely violent and brutal to the point that we said that it showed a kind of intent to destroy the community.”

The report also concluded that state-sponsored discrimination against the Rohingya during peacetime aggravated the sexual violence towards them during times of conflict. It condemned the State’s failure to hold the perpetrators accountable, adding that “such violence was only possible in a climate of long-standing tolerance and impunity, where military personnel had no reasonable fear of punishment or disciplinary action.” It mentioned that two years had passed and no military commander was held accountable for these and other crimes under international law for war crimes, crimes against humanity and genocide.

The UN thus held Myanmar’s government directly responsible “under the Genocide Convention for its failure to indicate and punish acts of genocide.”