To Heel Or Not To Heel 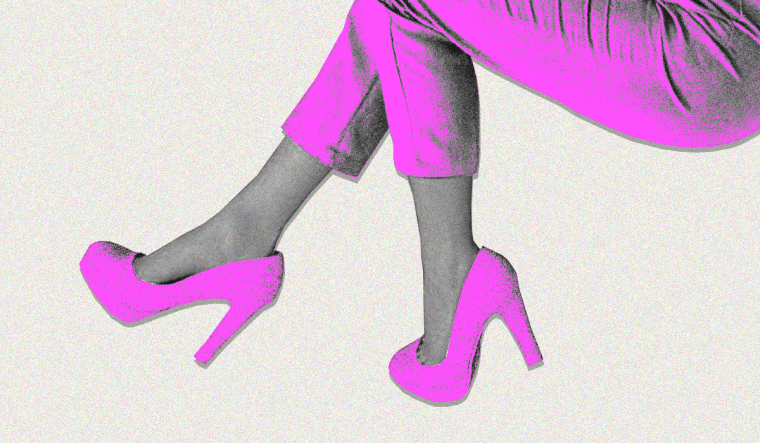 Of late, women are choosing comfort over pain — at least, in terms of footwear. Data suggests that for the first time ever, sales of trainers have overtaken those of high heels; not only that, 59% of female consumers admitted they preferred flats, compared to just 12% who would rather opt for a pair of heels. But this comparison is itself telling of the cultural power heels hold — stilettos, pumps, and every heeled footwear, despite the discomfort they pose, are still very much in circulation. A new study underscores this idea too, showing that even today, people perceive women who wear high heels as more attractive, feminine, and well-off.

Published in Personality and Individual Differences, the study concluded that this “staple of women’s fashion” may not be on its way to oblivion — not in people’s minds, at least. The researchers recruited about 450 participants, who had to rate two silhouettes of a woman — one in high heels, and one in flats — on her attractiveness, femininity, health, and status in society, among others. The first silhouette performed better on each of the metrics.

While women around the world are struggling with make-up tax, unrealistic beauty standards, and the resultant low self-esteem — this study serves to further illustrate the grim reality that even in 2022, we are still far away from discarding gender and beauty norms.

“[A] woman’s walk [is perceived] as more attractive when she’s wearing heels, due to the heels changing lumbar curvature, exaggerating the chest and hips, and increasing pelvic tilt,” explains an article on PsyPost.

Further, Laurie Brucker, an image consultant, personal stylist, and confidence coach says, “When a woman walks in heels, fluid strut is required which forces women to move their hips… [be it as] a subtle strut or an exaggerated catwalk” — bolstering both attractiveness and ideas of femininity that are undergirded in gender norms and furthered through magazine covers and fashion show catwalks.

Interestingly, though, a 2017 study states,”…high-heeled footwear increased women’s attractiveness only when wearing heels altered their lumbar curvature to be closer to an evolutionarily optimal angle.” Elaborating on the influence of evolution on our cultural preference for heels, the researchers had noted that “these findings illustrate how human evolved psychology can contribute to and intersect with aspects of cultural evolution, highlighting that the two are not independent or autonomous processes but rather are deeply intertwined.”

Arguably, society’s fascination with heels may even be culturally-ingrained in us, at this point. Remember Marilyn Monroe’s quote, “Give a girl the right shoes, and she can conquer the world?” The notion might also have been boosted by the popularity of shows like Sex And The City — that not only portrayed an unhealthy obsession with heels, but also promoted a consumerist culture around them giving further impetus to their value in society.

Perhaps, the idea that “women love shoes” — promoted through dialogues like “When one door closes, a shoebox opens,” or “I have this little substance abuse problem… expensive footwear,” that often centered around pairs of heels — also led people to subconsciously associate heels with femininity.

Further, given how highly heels tend to be priced, the researchers noted that wearing them is perceived as a status symbol too — making the wearer seem financially well-off. Perhaps, it even suggests that they have a good sense of fashion. The fact that they add height to one’s appearance also, reportedly, symbolizes power.

The fact remains that those of us who aren’t Blake Lively and don’t find wearing a pair of Louboutins “relaxing,” will agree as to how painful it is to strut around in heels. “Any woman who has gone through an evening standing, walking, dancing, or leaning casually against a bar in high heels knows the pulsing, constrictive, numbing pain they can cause,” Stacey Hutson, a certified transformational nutrition coach, wrote in February.

Wearing heels can also signal health, due to the “cost” of wearing them, which is the discomfort.

Unfortunately, though, the cultural obsession with heels can also have tangible detriments for women. They are often considered part of the formal attire also means that women are forced to compromise on comfort over the desire to come off as more assertive. In fact, in the last decade, there was even an online petition seeking it to be deemed illegal for a company to require women to wear high heels at work.

Moreover, heels don’t just “feel” painful in the moment, though. Wearing them can cause long-term damage to our bodies. “Lumbar spine flattening, posterior displacement of the head, and unwelcome increased pressure on the foot are all results of heel-wearing. They can even cause spasm-producing spinal nerve conditions,” Hutson added.

However, the lockdown catalyzed the journey of making comfortable footwear fashionable again. One can only hope now that our ingrained notions around heels undergo a transformation too — so that women, who don’t want to walk around in heels, aren’t subjected to any invisible pressure to writhe in the agony that heels can spell.

beauty norms | gender | heels | To Heel Or Not To Heel