Why We Experience Déjà Vu 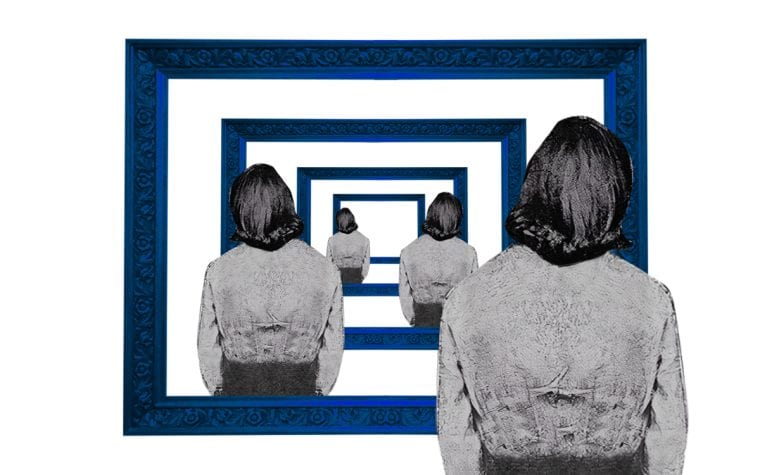 It’s spring 2021 — we’re in the middle of a mass, global vaccination campaign; we’re no longer wiping down our vegetables with hand sanitizer; and we’re not under lockdown. So why does it still feel like we’ve been here before?

The ongoing, underlying trauma that connects this spring to last year’s spring — coupled with actual similarities like rising Covid19 cases, the continuing threat of contagion, and still keeping close to home — might explain the eerie familiarity. But some sensations of recognition are harder to trace. In fact, some sensations of recognition are impossible to trace, and yet they’re so strong, they feel like a reverse premonition. They feel like déjà vu.

Déjà vu — French for “already seen” — is a mental sensation of intense familiarity coupled with the awareness that the familiarity is mistaken. It’s a recognition we know is wrong, a memory we know doesn’t exist. This conflict between what we know and what we remember is why déjà vu feels so eerie — almost paranormal or out-of-body.

“It’s the awareness that you’re being tricked that makes déjà vu so unique compared to other memory events,” Dr. Akira O’Connor, a senior psychology lecturer at the University of St Andrews, told BBC’s Science Focus.

This awareness is very common. Déjà vu is almost impossible to study — people are rarely hooked up to electrodes or undergoing internal scans when they experience it — so most information about the sensation comes from self-reports, which suggest at least two-thirds of people will experience this fleeting mental trickery at some point in their lives. People who travel often or who watch a lot of movies may be more prone to déjà vu than others who don’t. The sensation does not seem to occur before age 8-9 (or perhaps children younger than that don’t have the ability to describe it), and experiences of déjà vu become less common as we age.

But as for why we experience déjà vu at all — that’s less clear. Multiple theories attempt to explain it, with each being a potentially legitimate source of the sensation. Like a physical itch, the mental itch of déjà vu likely has many causes, experts say.

Probably the strongest theory, with some experimental backing, is that the false familiarity isn’t a sign of faulty memory, so much as it’s a sign of a well-functioning brain that actively fact-checks itself. Human memory is notoriously faulty and malleable; this theory holds that déjà vu occurs as our brains’ frontal regions evaluate our memories and flag an error.

This theory developed out of research by O’Connor that attempted to incept a false memory into subjects’ minds in order to later evoke a feeling of incorrect familiarity. Researchers did this by asking subjects to memorize a series of words related to sleep — pillow, bed, dream, night — but not the word sleep itself. ‘Have you heard any words beginning with the letter S?’ researchers later asked them. No, participants replied. Have you heard the word ‘sleep’?

Participants weren’t so sure — it felt familiar even though they knew they hadn’t heard any word starting with S.

During this, participants underwent fMRI scans, which showed their brains’ frontal areas light up during this manufactured déjà vu — areas devoted to decision making, not memory — almost as if they were trying to decide whether what they thought they remembered was true.

Another explanation for déjà vu, with some experimental findings to back it up, is that our stored memories still influence our present perception even if we can’t consciously recall them. A 2012 study that immersed participants in different virtual reality scenes saw most report déjà vu when viewing a scene that appeared similar to a previous one — even if they could not directly recall the earlier scene or its similarity. They just found the new scene inexplicably familiar.

Other explanations for déjà vu are more speculative. One suggests that déjà vu occurs when a familiar object appears incongruously. Seeing known objects or people out of context or unexpectedly is when familiarity strikes us, not seeing them within the usual, expected context. For instance, seeing your building’s security guard at the gate wouldn’t feel familiar — it just is; but seeing him at a restaurant might bring feelings of familiarity, even if you can’t place him. In the moment of out-of-context perception, our brains process the familiarity of known things first, even if we don’t consciously recognize them, and that initial familiarity can color our perception of the whole otherwise-unfamiliar experience.

Less-convincing theories revolve around brain misfires and hiccups in information processing. The neurological explanation stems from individuals with epilepsy, many of whom report a dreamy, déjà vu-like state or ‘aura’ before a seizure. Researchers have theorized that déjà vu is a type of minor seizure, a misfiring in the brain’s temporal lobe akin to epileptic seizures, but data hasn’t yet backed this up. Another theory around déjà vu positions the freaky familiarity as the result of a glitch in the way the brain processes information. The brain is either recording new memories or remembering existing one — akin to the two sides of a cassette tape. When these dual processes accidentally trigger in tandem, the present may seem like the past, and the past like the present, producing the feeling of eerie familiarity where there is none. The theory doesn’t explain how the processing glitch might occur, though, and most experts think of it merely as a nice idea.

Many, many more theories attempt to explain déjà vu, but ultimately, the mechanisms behind the creeping been-here-done-this-before feeling are as mysterious as the sensation itself. But one thing scientists know for sure: déjà vu becomes more common when we are stressed and tired. After a year of unprecedented anxiety, fear, and sleeplessness, the ongoing, underlying trauma of the pandemic might not be the only thing having us looking around and wondering — have we been here before?