Cat's Out of the Bag

Why We Have the Uncontrollable Urge to Spill Secrets 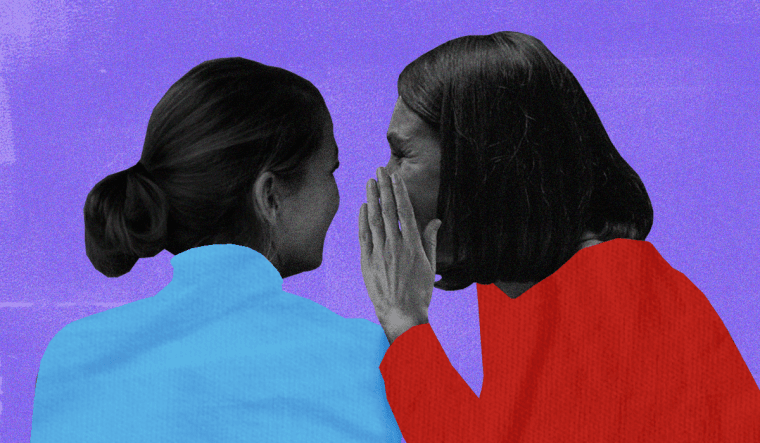 Welcome to a territory outside of ethics. The clandestine world of secrets is built on infamy and moral bankruptcy, but it has quite a few citizens circling its cobbled streets. From a secret conversation to a secret recipe, we’re all made of secrets — of our own and others.

And the one thing that unites these billowing threads of information is our desire to reveal — or at least hint at– other people’s hidden skeletons. It’s not a virtue, but a vice we all share. But what makes us love the idea of telling secrets, despite the unethical undertones?

As soon as you tell somebody not to repeat your secret, people begin to have an obsessive, anxious urge to share it with somebody, said Dr. Asim Shah, professor and executive vice chair in the Menninger Department of Psychiatry and Behavioral Sciences at Baylor College, who conducted a study about why people can’t keep secrets.

For one, it serves a very primal human urge: to be liked and feed into a sense of self-importance. For some, information becomes like hot currency. “Having something to share that should not be shared is like having money burning a hole in their pockets. They may trade this currency—your secrets—with someone else for some other kind of information they want,” counselor Suzanne Degges-White wrote. Imagine a good-old “spill the tea” session, where friends barter others’ information to feel included.

Two, secrets carry the inexplicable charm of mystery. There is so much underlying richness in the world of the unknown — so wild the imagination can run — that it makes it exciting to dwell on them. “What’s more, they are sexy. Secret rendezvous, secret recipes, and secret doors are excellent things, even if secret sauce, secret underground bunkers, and Bob Dylan appearing in commercials for Victoria’s Secret are not,” Esquire noted. As William Gibson wrote in his novel: “Secrets are the very root of cool.”

Why We Love a Good Scandal

In some cases, revealing information acts as a form of moral punishment. Earlier this month, researchers at Arizona State University and Columbia University looked at the link between morals and secrets. They asked participants, with nine different case studies, when they thought it was okay to reveal someone’s well-kept information. The participants were more likely to divulge secrets when the secret broke the individual’s moral code. “Participants were more willing to reveal immoral secrets as a form of punishment, and this was explained by feelings of moral outrage,” according to Jessica Salerno, an associate professor of psychology at ASU. Think of secrets about infidelity, or someone losing their virginity. The role of punishment, they noted, underscored the notorious act of spilling the beans.

There’s also the powerful element of guilt. People may be more likely to let out a piece of information out of guilt (in the interest of being “honest”) than preserve it to maintain someone’s confidence. All those times your sibling ratted you out? It is not limited to spite, sometimes it’s just rinky-dink guilt.

If we believe in the best of people, one could argue a secret reveal could just be a mistake.  “Our minds have a limited capacity to process information,” the psychologist Art Markman has written. “So if you are engaged in a complex discussion, it may be difficult to keep track of what you’re allowed to say and what you aren’t, which can lead you to divulge information you shouldn’t.” Someone may unintentionally let information slip thinking it’s a casual conversation — an “oopsie” moment, if you will.

To some extent, people may not be programmed really to guard others’ truths. When Freud said, “No mortal can keep a secret,” he didn’t limit his hypothesis to the wondrous lure of gossiping. “If his lips are silent, he chatters with his fingertips; betrayal oozes out of him at every pore.” It’s a cynical view to have (not to mention it lets people off the hook for betraying someone’s confidence), but an argument worthy of consideration nonetheless.

I may take Tom Stoppard’s advice, who wrote in The Invention of Love: “I will take his secret to the grave, telling people I meet on the way.”

Cat's Out of the Bag | human behavior | psychology | secrets