The Fault In Our Star Alignments 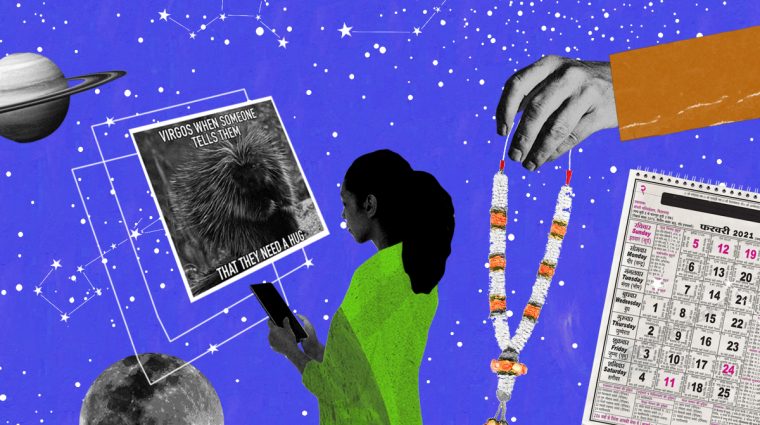 You wouldn’t need to scour the internet for too long to come across memes about earth or wind signs and the kind of month they’re having, how they behave in various situations, and how they would react to, say, a minor inconvenience or a major catastrophe.

Where newspaper columns and magazines once carried similar tips, tricks, and advice, the phenomenon has now moved online and become a major GenZ subculture. But in India, young people taking to it — whether ironically or not — replicates a generational pattern that is problematic at best, dangerous at worst.

The internet’s “pop” astrology and memes are devoid of contextualization or nuance. Byte-sized with its own nomenclature, rules, and inner circle jokes, it is everywhere whether one believes in it or not. Indeed, it arguably has very little to do with belief. The idea is not to take it too seriously. But this makes it sound benign and rootless when it isn’t. As a result, it risks normalizing a rhetoric that many in India have been trying hard to fight.

“Astrology has created so much chaos in my extended family, such as getting 19 year-olds married to 33 year-olds,” says Aparna, 23. Her experience is not unique; many women reported feeling pressurized to get married at a certain age, to a certain person, without any regard for their actual desires, due to an astrologer’s verdict. “They have been forcing marriage upon me and astrology is something they look at every single day,” says Aksheyaa, 24.

Here is where memes about the “compatibility” of various signs tend to undermine the real life costs of taking astrology seriously.

Leaving the fundamental logic at play unchallenged, even passively mainstreaming it through humor, irony, or superficial interest, means that young people may be less likely to consolidate efforts towards challenging the more regressive manifestations of astrology that affect their peers.

There is admittedly a difference between religious astrology offline, and the more decontextualized, “secular” astrology from the memes online. Where the former intersects with ritualism to influence future outcomes, the latter is more in the realm of spirituality and understanding more about people’s personalities. But there is a point where the two meet.

The cultural associations of astrology in India have deep roots in religion and caste, with its stranglehold over many families suffocating many young people. But there are some emerging corners of the internet where these associations start to creep into the astrology that appeals to young people online, the kind where its hippie, “love and peace” vibes feel liberating in the context of increasing violence and conflict in society.

An influencer who goes by the username “Wandering Kamya” is a case in point how deceptive this can be. Her feed is full of mystical imagery, her outfits crying free spiritedness with a touch of spiritual asceticism, her mannerisms, gestures, and words carefully controlled to look and feel like they come from profound inner knowledge that only she has unlocked. Astrology is just one of the many spiritual things she espouses, but there is an undercurrent of reactionary romanticization of India’s “ancient” and “lost” culture — by which she means Hinduism. And through the language of indigenity and decolonization, Kamya “reclaims” the religious connotations associated with astrology and asserts these roots very strongly.

This is online, but there are also renowned academics who espouse similar things offline. The scholar Meera Nanda points to this very phenomenon and calls it “reactionary modernism.”

In other words, the line that separates how astrology is discussed online, and how it is practised offline, can and does blur. The question then becomes this: do people hold some kind of social responsibility for engaging with astrology of any kind?

According to Mukta Dabholkar,  a rationalist and organizer of the Maharashtra Andhashraddha Nirmolan Samiti (MANS), the answer is yes — because surrendering to beliefs that don’t have their basis in tangible facts can be dangerous for a society.

She speaks to the increasing prevalence of the idea that “choice” is the be-all and end-all of autonomy, without questioning the meaning or consequences of any of the choices we make. Indeed, much has been said and written about how millennials and Gen Z find comfort in astrology as a coping mechanism for dealing with the realities of the world. Rather than accommodating honest conversations about how to grapple with the tension between mental health and astrology, however, internet discourse seems to be pervaded with a sense of normalization through humor and self-aware, ironic distancing.

What Dabholkar says also resonates in a context much larger than she lets on. Her father is Narendra Dabholkar, the famed anti-superstition activist who challenged many an astrologer in his day. His work led up to one fateful day in 2013, when a group of unknown assailants killed him for doing just that. This also speaks to the huge dissonance between the things we take for granted online and what happens offline.

In explaining why “online” astrology is not harmless, Dabholkar tells me how the current crop of millennials are not the first of their kind to have this kind of detached, almost ironic belief in astrology. In every generation, there have been people with liberal mindsets, who held beliefs in the more “polished” forms of astrology — ones that don’t entail outright irrationality like black magic, human or animal sacrifice — but those that sit comfortably with their worldviews as lifestyle choices like choosing a job, a house, a partner, or a hobby, she explains. There is a certain class component to what kind of astrology is deemed “acceptable,” and what kind is looked down upon as irrational and tacky.

The influence of Western astrology, which the more privileged of young Indians access and engage with, is arguably this generation’s version of refined, socially acceptable astrology, just as vastu was to Hindu majority predecessors. It comes free of the baggage of religion and dogma, and there is a certain polished, hippie aura around it that makes it appealing as a lifestyle choice without feeling the need to think about its social and political repercussions — there don’t appear to be any. This has arguably morphed into an internet subculture of its own, which makes its popularity something that we have not yet reckoned with on a broader scale, both on a personal or a political level.

But Dabholkar advocates for not separating this belief from politics and society, irrespective of how personal one might think their beliefs are. What she says resonates in a digital context: there is a reason why the seemingly apolitical, neutral kind of astrology is being used as a front for something more sinister by the likes of Wandering Kamya. Astrology has the perfect amount of mystique and historical timelessness to be malleable to any kind of framing — often, it ends up serving as a vehicle to glorify a regressive past, expound on the futurism of the Vedas, and propagate other reactionary religious ideas in a way that is palatable to young people.

This has deep and urgent implications for politics.

There is more to why it might be worth urgently re-examining our fixation with the seemingly decontextualized version of astrology we see online. “Astrology is an exploitative structure that profits off of people’s paranoia and fear. It is a very dangerous superstition,” says Sanal Edamaruku, President of the Indian Rationalist Association and friend of Narendra Dabholkar’s. Edamaruku currently resides in Finland due to threats to his life in India, a result of his work in challenging superstitions including astrology.

For Dabholkar and Edamaruku, it appears, leaving room for ambiguity, doubt, and surrendering to purported forces outside of oneself can consequently leave room for being passive citizens in a nation in turmoil. They acknowledge that in a society in flux, people are bound to search for answers or a vocabulary to make sense of what is happening. But for two people who have had so much stake in the game, they stand as examples of how liberating it can be to stay rooted in facts.

While it can, and has soothed individuals during times of societal transformation, Dabholkar warns that we need to be paying attention to what it does even among the niche group of young people online. It can be dangerous on a personal level too, she says — since ascribing circumstances to something external, whether in jest or not, involves undermining the importance of people having agency over their lives. The consequences are there for all to see, and Dabholkar’s and Edamaruku’s lives stand testament to this.

With burgeoning state support for astrology too, it would be remiss to not ask questions about who stands to gain from astrology’s increasing acceptance as “cool”, funny, or even “woke”, in the bigger picture. Its progressive veneer online arguably allows such developments to slip under the radar, but its potential in answering an era of existential unease cannot be denied.

Indeed, there are no easy answers. Dabholkar summarizes her approach to the conflict by quoting her father: “For eradicating blind faith, we need to meet people with kindness rather than anger, and treat them with love instead of sarcasm.” When all is said and done, the spirit of dialogue and inquiry — common to most progressives — could serve to unite those who somehow find themselves on opposite sides of the same room.