It's All In The Wrist 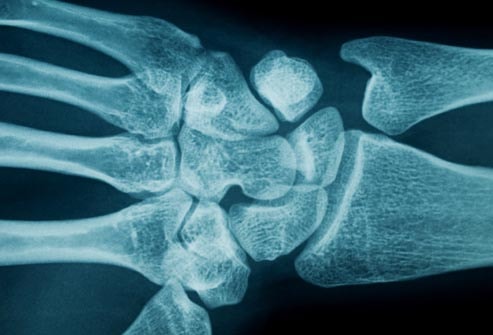 What is carpal tunnel syndrome?

Carpal tunnel syndrome occurs when the carpal tunnel — a narrow, rigid channel comprising bone and ligaments that runs along the underside of the wrist — collapses or narrows, squeezing the median nerve, which runs through it, according to the U.S. National Institute of Neurological Disorders and Stroke (NINDS). The median nerve runs from the forearm to the hand, where it controls some movement and touch sensations. When the median nerve is compressed, hand strength and sensation may be compromised and pain is common.

Many activities and experiences can contribute to the carpal tunnel compressing the median nerve, none of which have been established as direct causes but rather are seen as risk factors. The most popularly understood contributing factor to carpal tunnel syndrome is repetitive, small movements that flex the wrist and cause inflammation in the tendons around the carpal tunnel — typing, for instance, or using vibrating power tools.

What are the symptoms of carpal tunnel syndrome?

According to multiple expert sources, symptoms of carpal tunnel syndrome include:

These symptoms could develop at any point and/or worsen. They might be severe enough to awaken someone from sleep.

Who is at risk for carpal tunnel syndrome?

Women are three times more likely to develop carpal tunnel syndrome than men. In large part, it’s due to anatomical differences; the average woman’s carpal tunnel is simply narrower to begin with than the average man’s. It’s also due to certain risk factors unique to women: pregnancy and menopause can affect fluid retention, which can put pressure on the tunnel; thyroid conditions and autoimmune disorders, both of which are more common in women than men, can also up the risk of developing carpal tunnel syndrome.

People with diabetes, obesity, and/or high blood pressure are also more at risk of developing carpal tunnel syndrome. The same goes for people who do repetitive and/or assembly-line work such as manufacturing, sewing, construction, cleaning, and meat-, poultry-, or fish-packing. In fact, research shows these workers are three times more likely to develop the condition than office workers such as data entry personnel, according the NINDS.

All You Need to Know About Restless Leg Syndrome

What are the effects of carpal tunnel syndrome?

Carpal tunnel syndrome symptoms may become so severe they can inhibit work or cause sleeplessness. At this point, but ideally before, experts advise consulting a doctor. Without treatment, carpal tunnel syndrome can cause permanent nerve and muscle damage, according to the Mayo Clinic.

How is carpal tunnel syndrome diagnosed?

Carpal tunnel syndrome is most commonly diagnosed between the ages of 30 and 60. Doctors typically take a medical history; a physical examination of sensation, strength, and reflexes; and a diagnostic test such as an X-ray or tests of how well nerve impulses are reaching the related muscles, according to the American Association of Neurological Surgeons.

How is carpal tunnel syndrome treated?

For mild symptoms, frequent breaks to rest the hands and wrists as well as cold packs to reduce swelling may be advised. For mild to moderate symptoms occurring for less than 10 months, treatment may involve these efforts, along with wrist splinting, pain and anti-inflammatory medicine, according to the Mayo Clinic.

If these efforts don’t work and symptoms worsen, or if symptoms are already severe, surgery may be required.

Can carpal tunnel syndrome be prevented?

While no specific activity has been proven to prevent carpal tunnel syndrome, experts offer many suggestions, especially for individuals already at risk for the condition. For someone in an occupation at risk for carpal tunnel syndrome, suggestions include taking frequent breaks and stretching the hands and wrists. For office workers, the same advice holds, as well as making sure one’s computer mouse doesn’t put undue pressure on the wrist and keeping one’s keyboard at elbow-height or lower. Finally, overall correct posture may reduce the likelihood of developing carpal tunnel syndrome; poor posture can strain nerves in the neck, which can affect the arms, wrists, hands, and fingers, too.

autoimmune disorders | bone health | It's All In The Wrist