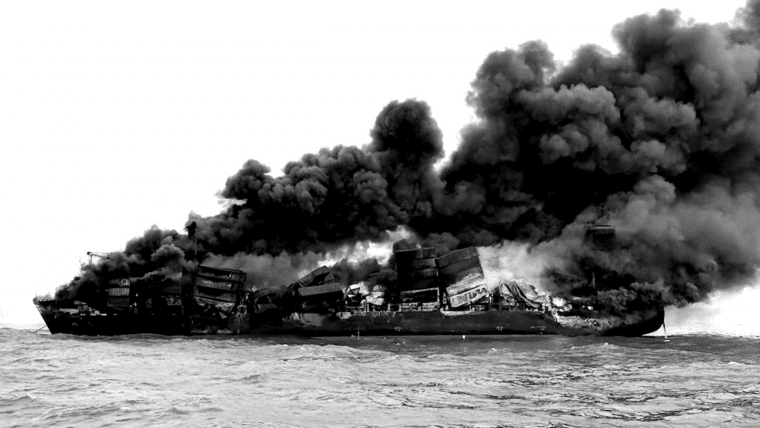 A cargo ship carrying hazardous chemicals and plastic goods caught fire along the Sri Lankan coast on May 20, and has triggered a massive environmental crisis. The fire was extinguished on late Tuesday evening — after burning for almost two weeks. The accident caused a substantial amount of microplastics and hazardous chemicals to spill in the Indian Ocean and along Colombo’s beaches, killing marine life and threatening the surrounding ecology.

While the damage is still unfolding, early signs indicate extreme levels of marine pollution. The water, contaminated and coated with a thick layer of chemical waste, is proving fatal to marine life, including sea turtles, fish, and birds; the beach is dotted with microplastics that are fatal and highly toxic to wildlife. Environmentalists note this is one of the worst ecological catastrophes in Sri Lanka’s history.

“With the available information so far, this can be described as the worst disaster in my lifetime,” Dharshani Lahandapura, the chair of the Marine Environment Protection Authority, told The Guardian. The MEPA says the ecological damage to coral reefs, lagoons, and mangroves could take decades to repair.

The fire broke out on the cargo ship MV X-Press Pearl, which was carrying raw material and chemicals from the Gujarat port to Colombia. It was anchored nine miles off Colombo’s coast when the blaze started. The goods included 5 tonnes of nitric acid, sodium hydroxide, and other dangerous chemicals, along with 28 containers of raw materials used to make plastic bags. The ship had more than 300 tonnes of fuel in its tanks. The fire incinerated most cargo onboard — causing microplastic granules to fall into the Indian Ocean and spilling oil.

The Sri Lankan coast is already coated with oil, visible to the naked eye. But experts worry the plastic debris, swamped across the west coast, will trigger the most damage. Plastic pellets — used to manufacture plastic products — are small in size and can be mistaken for food by marine organisms. Microplastic, which causes death and damage to marine life, is believed to be the biggest source of plastic pollution. At least 800 species worldwide are affected by marine debris annually and as much as 80% of that litter is plastic, according to a United Nations estimate. Microplastics inevitably accumulate underwater, posing a threat to the environment and also humans as this waste is introduced into the global food chain.

The current fire led to the leak of three containers carrying plastic waste, raising concerns for fish and other wildlife, who are at risk of swallowing the microparticles. Early investigation shows several fish and other aquatic species are dying due to the poisoning.

“Yesterday, and even today, we see how the movement of pellets are polluting all the western coast of Sri Lanka and along the southern coast. This is going to have a severe impact, socially and environmentally,” Muditha Katuwawala, coordinator of a Sri Lankan environmental group Pearl Protectors, told CNN. The impact on the ocean surrounding the ship would be “quite toxic,” Katuwawala adds.

Although the Sri Lankan Navy and Indian Coastguard jointly carried out operations to contain the flames, monsoon winds and flammable cargo complicated and elongated the process. The fire is now extinguished, but locals have been advised to not touch any debris as it can be highly toxic. The coastguard members have kicked off a cleanup, donning protective gear and rubber As of now, the government believes that the fire was caused by a nitric acid leak (which the crew was allegedly aware of since May 11, nine days before the fire broke out). Authorities are gearing up for further investigation.

The incident is an ecological catastrophe and a somber reminder of how man-made disasters can cause irreparable damage to wildlife and the environment.