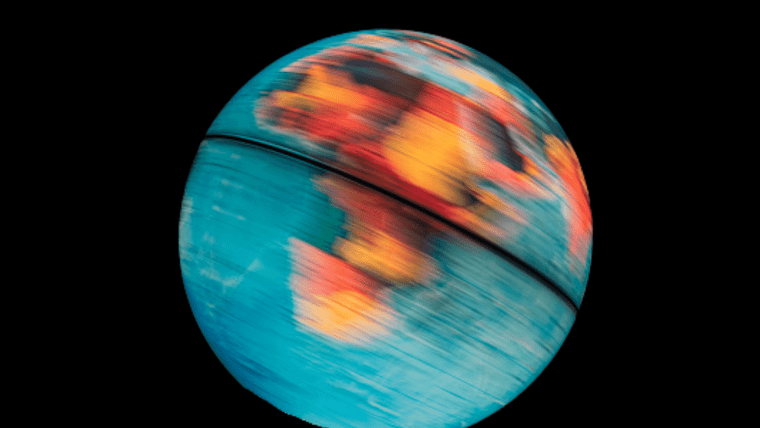 Scientists know Earth tilts from time to time on its axis. But just how often this has happened, and what this means, remains a longstanding geological debate. Evidence found in Italy shows the Earth tilted around 12 degrees 84 million years ago. This was the time when dinosaurs were alive. But the Earth corrected itself quickly. To put this into context: the tilt would have displaced continents by 1,000s of miles, enough to push New York City to where Tampa, Florida is now.

An April study found that a similar tilt like the one from 84 million years ago is currently happening, courtesy of climate change.

The Earth is made up of a metal inner core and has a liquid metal outer core. Hugging this outer core is a solid mantle and the crust (the surface on which we live). “All of this is spinning like a top, once per day,” Phys.org explained. The planet spins around an imaginary line, passing through the North and South Pole, called its spin axis. The Earth’s crust is fragmented into tectonic plates; becoming the foundation for continents and oceans.

According to the “true polar wander” (TPW) theory, some scientists argue that the outer mantle and crust can wobble and slide over the Earth’s liquid metal core. In other words, the crust and mantle rotated around the Earth’s outer core (also shifting the geographical poles and causing the planet to tilt itself) and slipped back. Think of a solved puzzle on a table; the minute the surface shakes, the pieces change position.

“This observation represents the most recent large-scale TPW documented and challenges the notion that the spin axis has been largely stable over the past 100 million years,” the researchers explain in their paper published in Nature Communications earlier this year. And while it tilted, it also snapped back quickly (over some five million years) — what the researchers called a “cosmic yo-yo.”

“The planet’s outer layer behaves elastically like a rubber band and would have snapped back to its original shape after the excursion,” Ross Mitchell, a geophysicist at the Chinese Academy of Sciences and a co-author, told Insider.

Earth’s Rotation Slowing Down May Be Leading to More Oxygen In the Atmosphere, Scientists Say

The tilting doesn’t alter the Earth’s magnetic field. Instead, the core’s shifting rocks generate paleomagnetic data, which helps scientists track the location and direction of the North and South poles. “Although scientists can measure true polar wander occurring today very precisely with satellites, geologists still debate whether large rotations of the mantle and crust have occurred in Earth’s past,” Phys.org added.

The evidence does two things: it challenges the idea that Earth’s spin axis has been stable over the last 100 million years, and the process may have started during the Late Cretaceous period. Some studies have argued there is limited geological record to show Earth was tipping over back then. The latest research plugs that hole. “That is one reason why it is so refreshing to see this study with its abundant and beautiful paleomagnetic data,” said geophysicist Richard Gordon, from Rice University in Houston, who wasn’t involved in the study.

The Earth tipping means continents and rocks at the core are displaced. According to the findings, tilting would have shifted Italy to the equator before the Earth tipped back. “We never suspected we would see this full round-trip event,” Mitchell said.

Any tipping around the axis influences climate patterns. “Whole portions of the planet could be plunged into darkness or thrown into direct sunlight for months at a time,” if the axial tilt were to change enough, Green Matters argued. For instance, if Earth’s axis tilted to 90 degrees, extreme seasons could accelerate climate change and its impact on every continent (like the Northern Hemisphere experiencing nearly 24 hours of sunlight for months).