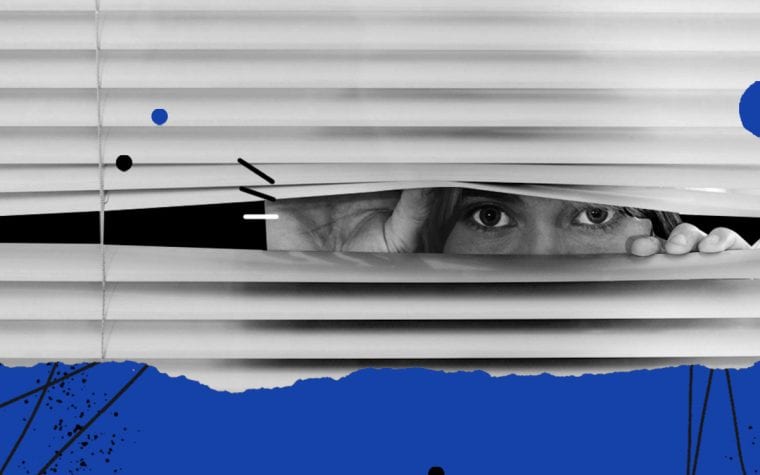 I feel like someone’s constantly watching me from behind, making and keeping notes — sometimes, even judging every move I make. No, I don’t imagine a Truman Show-esque rigmarole playing out around my life. I’m not even particularly worried that the watcher wants to murder me, just that they are watching. And so, I need to have my blinds shut when I’m sleeping, and I absolutely cannot have an uncovered ventilator in my bathroom, even if it’s on the 27th floor with no other buildings around.

Is this normal? Turns out, it kind of is.

In places with limited visual cues for the brain to process — like in dark places, or when we’re around people wearing sunglasses — we tend to assume we’re being watched. “It turns out that we’re hard-wired to believe that others are staring at us, especially when we’re uncertain,” explained Professor Colin Clifford from the University of Sydney, who conducted a study on gaze perception in 2013. He notes that this simply flows from our evolutionary underpinnings: “Direct gaze can signal dominance or a threat, and if you perceive something as a threat, you would not want to miss it. So assuming that the other person is looking at you may simply be a safer strategy.”

Is This Normal?: “Every Time I Start to Feel Happy, I Get Scared Bad Things Will Happen”

Also, experts explain that sometimes we may hear a noise too soft or faint to consciously register it, but loud enough to activate our fear circuits in the amygdala — leading the brain to construct a narrative to explain the noise. “For some people the feeling itself is so compelling that they have to explain it as something real,” James Allan Cheyne, professor emeritus of psychology at the University of Waterloo, told Popular Science.

Both of these explanations hint that feeling watched is a survival instinct — but it’s one subject to confirmation bias, a cognitive flaw that can lead us to believe we’re being watched just because it better fits a familiar narrative or experience. For example, we’re more likely to remember the moments when we turned around and did find someone staring at us and than we are the times when there wasn’t anyone there.

Some people are more vulnerable to these tricks in perception than others. Social anxiety can make individuals prone to constantly worrying about being watched — but typically only when they’re in public.

Is This Normal?: “I Can Only Sleep If I’m Covered With A Blanket or Sheet”

However, for those, like me, who feel watched even when they’re alone, the perpetual fear might be a result of formative childhood experiences. If one experienced intense scrutiny while growing up — due to being monitored constantly and intently, or being told they would mess up in some way or another if they were left alone — one may find it difficult to grow out of the feeling of being watched even years later.

Women may also be more prone to feeling like they’re being watched, as women are conditioned to believe that their worth is determined by their appearance and other’s views of their appearance. From a very young age, many women feel pressured to look ‘sexy’ even during grocery-runs and are constantly exposed to ideas and ad campaigns like “Are you selfie ready?” and “Every street is a catwalk.” This can prompt women to feel as if they are always under scrutiny, especially in the age of social media and digital surveillance. A longitudinal study of open-plan offices did find that women do feel exposed and watched than men do, to the extent the feeling it affected their performance at work.

So while it appears I may be overreacting every time I feel I’m being watched, it doesn’t seem like I’m alone.