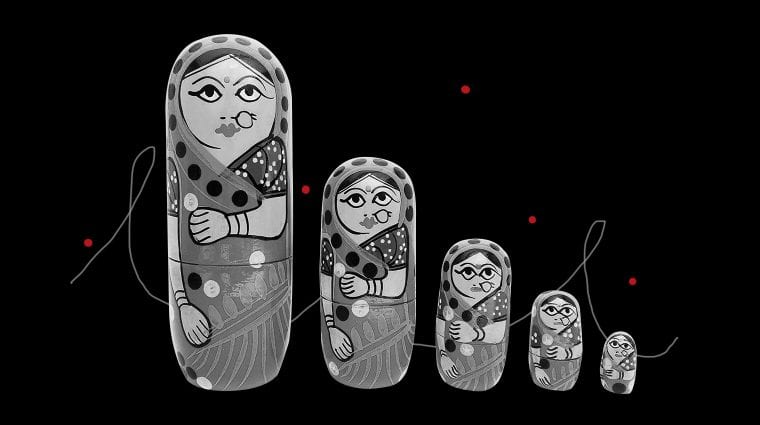 The women of today are known to be fearless and outspoken – breakers of feudal shackles of patriarchy. We are exemplars of self-love. Brazen changemakers. But we are also known to be more anxious than any previous generation. 88% of millennial women suffer from stress, while Gen Z reports various mental health problems resulting from chronic anxiety. According to research, we are prone to experiencing a wide range of conditions from depression and PTSD to schizophrenia and bipolar disorder. All this leads one to wonder how it was that our foremothers endured their travails so much better when we seem to fall apart so easily? After all, like us, they too rebelled against male dominance, fought to protect their freedoms, nativities, and artforms, sought to be leaders and changemakers. Can it really be that we are the first generation of women to feel the way we do, zinging between contradictory thoughts?

The truth is, women’s history is veiled in silence. We rarely have access to women’s voices from the past. We do not know what they thought about or how they felt over these thousands of years. But we do know that society has always regulated female lives. Our foremothers were pushed into normative social roles, often without consent. Childless women were condemned, widows ostracized, the sexually deviant honour-killed. Women from marginalized communities were persecuted, raped, and deprived of a dignified livelihood. In such a society – one that demanded women be selfless, that they suffer for the sake of their clan, and always put themselves last – their silence was not a choice.

“I strongly believe that our mothers and grandmothers also had their share of psychological sufferings as do millennial women,” says Dr. Mitali Soni Loya, a leading psychiatrist from Bhopal, where she runs Vayam, a specialized clinic for women. “The difference lies in their coping strategies. As women did not have much freedom of expression in the past, psychological distress was expressed either in the form of physical symptoms like having pain at multiple sites, having a long-standing illness that does not get better with any treatment or in the form of illnesses like conversion disorder (hysteria).”

40% of Women Who Commit Suicide Globally Are Indian. Most of Them are Married.

Recognizing the symptoms of mental imbalance continues being a difficult task for women today. Even for those who do, the stigma of mental health stops them from reporting it or seeking treatment. So, one can only imagine what it must’ve been like in our foremothers’ time, before modern psychiatry reached the shores of India. The line that demarcated sanity from insanity was incredibly fuzzy, which meant that women would’ve had to endure their traumas silently and internalize their emotions. For if they didn’t and fell off the edge of their minds, they would be persecuted as witches, accused of being possessed, or locked up for lunacy. Let’s not forget that imperial psychiatry originally considered madness a female malady. Only in the latter part of the twentieth century did women feminize the field. It’s hardly surprising then that the taboos related to women and mental health still exist. Consequently, many women continue to remain quiet about the goings on of their chaotic minds in fear of social stigma.

To compound matters, Indian women have been socialized to believe that silent suffering and sacrifice are illustrative of their personal strength. However, silence is far from golden when it comes to women’s mental health. Unresolved traumas and suppressed emotions can have lasting effects, not only in the lifetimes of those who suffer the trauma, but also in the lives of their descendants. New research in epigenetics suggests that the legacy of suffering echoes down several generations. Just like biological disorders that get passed on, our foremothers’ traumatic experiences and conflicts reverberate in our bodies too. In fact, certain genes mutate or atrophy as a result of trauma. This means that even when we aren’t explicitly told their stories of suffering, our blood carries traces of ancient agonies.

In a study conducted among female survivors of the Rwandan Genocide and their children, it was found that when mothers are in denial about past traumas or remain silent about painful experiences, their children are likely to suffer from psychiatric and psychosocial disorders. Descendants undergo panic attacks, feel ashamed about certain emotions, or are mistrustful of others in their community in spite of not experiencing trauma themselves.

Transgenerational traumas, however, are not always the result of cultural or historical oppression. Personal instances of trauma can trickle down too. Self-destructive behaviours like self-injury or substance abuse become normalized within families. Legacies of loss, displacement, and melancholia persist. Our emotional instabilities, then, come not only from felt traumas but also from the invisible and perceived. Our thoughts are entwined with feelings and memories that are not ours alone.

Even today, it is socially acceptable for men to display their emotions through aggression or egotism, but women are expected to internalize their suffering. When women dare to express their feelings, they’re accused of seeking attention or losing their minds. It is no surprise then that contemporary Indian women are two to three times more likely to experience psychological distress than men. We’re still dealing with the fallout of battling the patriarchy. We’re still surviving social stigmas related to our sexuality, race, class, caste, ability, or body image every single day. Fortunately, like our foremothers, we’re resilient and strong women. But unlike them, we must not internalize our emotions and suffocate ambiguous thoughts. We must break the cycle of trauma and look for tangible ways to heal our minds.

“Seeking mental health services is a positive life-changing experience,” says Samar Hafeez, a clinical psychologist, holistic health coach, and specialist in cognitive behavior therapy from Bengaluru. She explains that mental health is about building a relationship with oneself and expanding one’s mindfulness. “Self- awareness is an ongoing process, it is more a journey than a destination.”

To thrive as modern women, we must explore our pasts, confront the dark memories of bygone ordeals, and give voice to transgenerational silences. We must do this especially because the patriarchy continues to exalt our divine capacity to suffer. We’re celebrated when we writhe in agony silently. But when we defy expectations and discuss our emotions, our pasts, we are disdained. We lose the mantle of selflessness, of “ideal femininity” – an accolade we never asked for. We must acknowledge that we are the inheritors of a complex female legacy. To usher in a better future, it’s important that we reclaim the experiences of our foremothers, understand our own, and disentangle ourselves from the chain of suffering.

Put simply, talking about our mental health is vital for the empowerment of women in the 21st century. Sindhu Rajasekaran is the author of a novel, Kaleidoscopic Reflections, which was nominated for the Crossword Book Award, and a collection of short stories, So I Let It Be. Her essays, poetry, and fiction have appeared in international publications and anthologies. She has a master’s in creative writing from the University of Edinburgh. Currently, she’s a PhD researcher at the University of Strathclyde.
See all articles by Sindhu