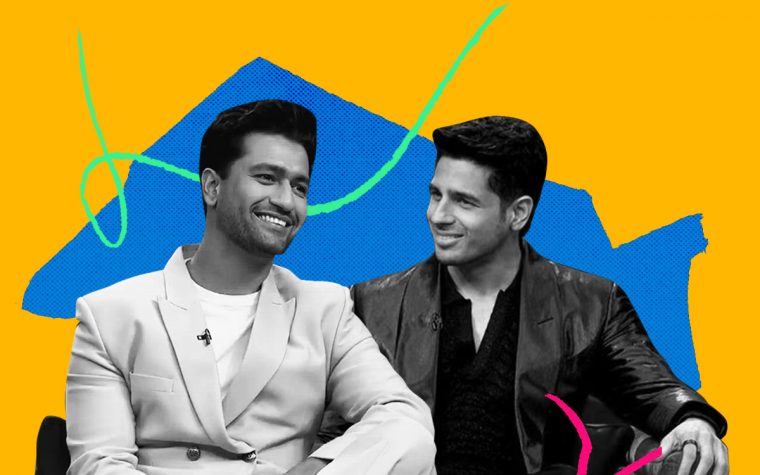 There’s something that Oscar Isaac, Timothee Chalamet, Dev Patel, Keanu Reeves — and as of Thursday night, Vicky Kaushal and Siddharth Malhotra — have in common: besides being actors, they’re all real people touted as “men written by women” on the internet. The individuals in question share some vaguely similar characteristics — they listen when spoken to, they’re polite, they’re handsome, and they seem like good people. After all, there isn’t much to know about them, being as they are celebrities with fiercely guarded inner worlds.

The information we do have — mannerisms, gestures, and vocal registers — we consume heartily and well. By all accounts, they really do possess the archetypal qualities of fictional, swoon-worthy men written by women authors. They’re the Darcys among us who can make us fall irrevocably, hopelessly in love in the blink of an eye. And yet, the trend of labeling real-life people — about whom we really know next to nothing — betrays a deeper angst.

There’s a discontent in the world of dating, relationships, and heterosexual romance; it is an acute and perceptible lack of humaneness.

This is not to say that men lack humanity. But the quality anchoring most men who are written by women — in real life and in fiction — is a warm sensibility more than any particular set of factors. These are men who are easy to love because they seem to have depth; they listen, and you could imagine them being curious about women in a way that makes them feel seen for who they are. They seem like they are unthreatened by intelligence, vivacity, and success in women; in fact, they appear as though they would actively encourage it even. This is a figment of dreams, which is what made the “men written by women” trope one that was worth having a name for. The pioneer of women making sensitive, thoughtful, and worthy partners out of men was a woman who lived more than 200 years ago. And yet, the Austenian quality continues to be pedestalized today, showing how little we’ve really come in terms of changing expectations around love.

The Problem With Packaging Healthy Dating Practices as Internet Trends

“Men theorize about love, but women are more often love’s practitioners. Most men feel that they receive love and therefore know what it feels like to be loved; women often feel we are in a constant state of yearning, wanting love but not receiving it,” wrote bell hooks, in her pioneering work All About Love. The idea cuts to the tragic heart of what seems like a silly trend: that there is simply an acute and encompassing dearth of men who know how to love as much as they know how to be loved.

The trope is also the inverse of an older cultural observation: the ridiculous ways in which men write women. If this is laden by a fundamental inability to know who women are beyond the sum of their parts, men written by women is characterized by the fundamental yearning for men to rectify this, and see beyond. This would mean asking serious questions about masculinity itself, and its role in perpetuating disappointment in heterosexual love for women.

It also points to an ongoing crisis of reckoning between feminism and masculinity. Men — really authoritarian, brutal ones — have wrested control of much of the world, slamming their fists down on the autonomy of women. Scholars, commentators, and fiercely vocal feminists have begun to ask: how do feminists deal with masculinity? What kind is the one that’s good for women who have for so long suffered under the brunt of cruelty and systemic, patriarchal violence?

The New Yorker notes how at this moment, on the one hand, there are those who denounce white heterosexual male supremacy and the kind of masculinity it represents; on the other, there are those who are distrustful of the “softer” kind of masculinity — softbois, if you will — and actively crave for more strength, even aggression in the men in their lives. All the men who are deemed to be “written by women” in today’s zeitgeist, then, tread a tightrope somewhere in-between: many thirst over men who appear in touch with their emotions using the vocabulary of aggression (asking these celebrities to choke, step on, or kill us, for instance).

An Ode to Harmless Romantic Banter in a ‘Negging’ Era

The prevalence of dating apps as one of the predominant sites for mediating love and sex could be making things worse. “…dating apps privilege the male gaze and give straight men an outsized idea of their power in their dealings with women,” writes Nancy Jo Sales, about how they’ve effectively “ruined men.” We’re in an era of hyper-optimizing ourselves for a right-swipe — effectively erasing softness, compassion, and the amorphous aspects of care that envelopes human relationships.

Things may be getting to a point where robots are increasingly looked upon to satisfy the longing for humanity that men, in the current version of heterosexual masculinity, are unable to provide. “Should the business of making heterosexuality compatible with gender parity prove too onerous or intractable, we can always consider resorting to the less demanding companionship of machines,” notes culture critic Zoë Heller, in the context of a recent decline in sexual activity.

The big, gaping chasm of tenderness, care, and reciprocity in heterosexual relationships points to what critic Jane Ward called the “tragedy of heterosexuality.” It’s what makes us so preoccupied with the merits of individual men, “fixing relationships with individual men rather than identifying hetero norms and hetero-masculinity themselves as fundamental problems,” as Ward notes.

There may be no better example of this than Shah Rukh Khan, whom economist Shrayana Bhattacharya analyzed as a figure of fandom and desire for women across various economic strata in India. His tenderness, vulnerability, wit, candor, and charisma unite the most disparate characters in a collective longing for the kind of love he represents — a love that’s absent from women’s lives no matter where they’re located in the socio-cultural landscape. While we can’t be in actual relationships with the men we see on our screens, we can project our desires and fantasies for a humane love onto them — making men like Shah Rukh Khan, Vicky Kaushal, or Keanu Reeves, in actuality, men written by women.