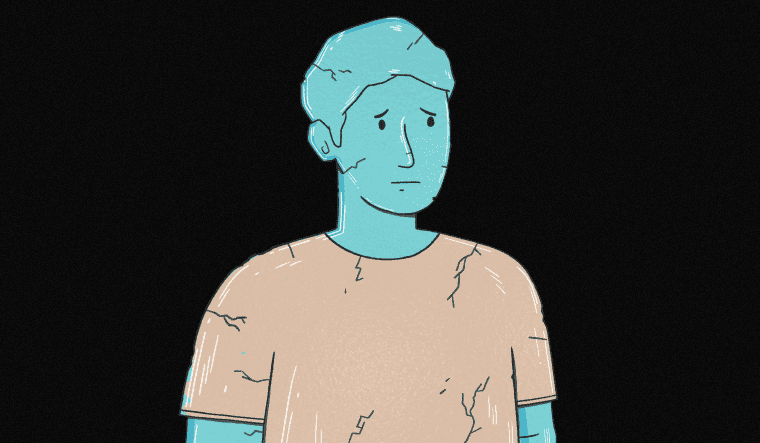 I used to smoke a fair amount around 2016-17. Those days, I was also quite interested in traveling, and this one time, I was doing a trek in Manali. Everything was going well — nothing out of the ordinary. Then, after I smoked a cigarette, I suddenly started feeling very strange on the left side of my body. Then, two of my fingers kind of got stuck. Eventually, I started noticing that every time I smoked, I felt my left leg, fingers on my left hand, or even my toes getting “locked” — like the way it happens when you get muscle cramps or a spasm on your feet, and things seem to get stuck for a few seconds. It was sort of like that.

At first, we went to a local doctor and he said it might be spondylitis. But he had a reputation of misdiagnosing people often, so we decided to get a second opinion. This time, we went to a neurologist we knew well. He had treated my naani (maternal grandmother) in the past when she had a stroke.

He asked me to get an MRI, which later detected a few spots on my brain. I remember the number of spots being one above the threshold required for a diagnosis of multiple sclerosis, or MS. Of course, I barely knew anything about the condition at the moment. Then I read about it and learned what autoimmune diseases like MS are. However, the problem is that when you go on the Internet, so much of the information available is just really frightening. It really doesn’t give any solace. The prognosis online always seems to suggest that no matter what you’re suffering from — or to what degree it has impacted your life — it will somehow lead to death. Naturally, it scared me too.

But then, it’s also up to your doctor to make you feel comfortable and explain things to you. He did that in the second week following my diagnosis. He also suggested that I meet with this researcher from the All India Institute of Medical Sciences, who is a professor there but takes mohalla appointments in the morning for people across socio-economic backgrounds. No matter how much money or clout one has, they have to wait [at the clinic] for about three odd hours for their turn. I began going there every month. Both he and my neurologist were able to assure me and give me the comfort that living with MS will not necessarily be a huge ordeal — that it would be like having diabetes, or anemia — just that it could be dangerous.

Turns out, I had a very benign form of MS. In fact, for the first three years, I wasn’t on any medication. When I began taking medicines also, it was a preventative step because you never know when it can strike. Unlike cancer, or other diseases that progress with time, MS isn’t slowly degenerative. When it strikes, you have an incident. Then that incident will render something amiss in your body, which won’t get cured. And this can strike at any time; when it happens, it happens. Otherwise, it’s just there.

To date, I don’t really show any “typical” signs of MS — I can walk straight, I have no motor issues, no muscular issues. Once in a while, I do feel a little numb on the left side of my body. But that’s just a part of living with MS. And slowly, you do learn how to live with the condition.

What It’s Like To Live With: Sudden Paralysis of the Face

As for my parents’ reaction to my diagnosis, my dad didn’t take it too badly, but my mother was pretty scared. Since then, she sends me emails about what lifestyle choices I should make to ensure my condition doesn’t get worse. I think she learned how to use email precisely to send me this information. I can’t smoke in front of them at all now, and if I over-drink, they start getting worried again. Sometimes, they do say things like, “Oh, maybe, if you hadn’t done so much masti in college, all of this wouldn’t be happening.” But then, no one really knows what causes MS.

My family also suggested that I try homeopathy. While there is no cure for MS in allopathy, I was told homeopathy [considered to be a “pseudoscience” by several scientists] can “not only control the disease but also reverse the effects.” But that would’ve required me to have three sets of medicines thrice a day, at an interval of two hours between medicine. On top of that, I wouldn’t be allowed to drink water or eat any food 30 minutes before and 30 minutes after having them. Can you imagine going through nine hours every single day with so much stress? For regular, working-class people, it’s not easy to live that way. So, yeah, between “practicality” versus “life,” I chose practicality.

So, instead, I take an injection every two weeks. It is expensive, but it suits my lifestyle better. I’m basically paying for the convenience of not having to take medicines every day. When I do take it, I’m sick for the next two days — with 102-103 degrees of fever, body ache. Of course, for those two days, I try to rest as much as possible. I can’t do much housework then, I’d need somebody else to walk our dogs — that sort of thing.

But then again, there’s an upside to taking this injection also. Right now, it’s being researched in some parts of the world as a treatment for severe cases of Covid19. And I feel like it has also made me slightly more immune also — like, in about two-and-a-half, or maybe, even three years, I haven’t fallen sick at all.

In terms of disclosing my condition to dates or prospective brides… honestly, it’s not a first-meeting conversation. So, it never came up with any of my Tinder dates. When things started to look like they’re going to go somewhere with my now-wife, I told her. It wasn’t a big deal. But then again, I ended up getting married to the only person I opened up about this to — other than my family and friends, of course. So, who knows how it could’ve gone with others? I’ll never know, and I’m just happy it wasn’t a bad experience for me.

After my marriage, I have made some lifestyle changes too. I try to be more responsible with my food and alcohol intake. I’ve also cut down on smoking — I only smoke when I drink, which is just once a week, and I don’t smoke more than two to three cigarettes at a time. Eating a lot of non-vegetarian food is also supposed to be good for my condition — it helps in building and reconnecting the neurons — so I try to do that. I’ve also been taking Vitamin D supplements lately.