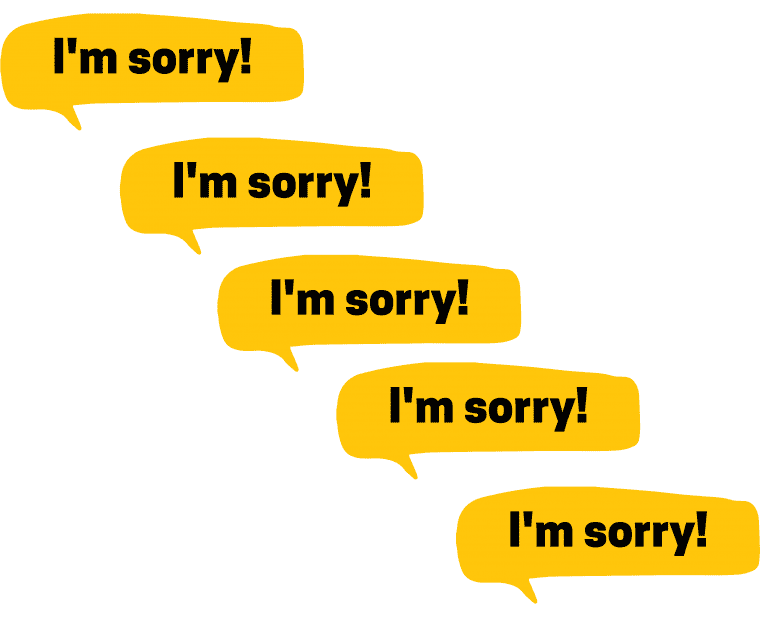 As the #MeToo movement demonstrated, some people are so bad at apologies, that you find yourself resisting the urge to tell them to go back in time, and learn how to apologize. On the other hand, some of us are so over-apologetic, that we don’t just apologize to inanimate objects we may have accidentally bumped into, but also feel the need to apologize for the actions of others that are beyond our control.

But, why do we apologize at all? Because human behavior is interdependent, people apologize when they have breached someone’s trust, or wronged them in any manner, with the objective of restoring their relationship. When one breaks a rule of social conduct, a subsequent apology re-establishes the rule by acknowledging that it was broken, and rebuilds trust in the individual wronged that the apologizer won’t repeat their mistake again. Moreover, by validating the feelings of the person one wronged, an apology also shows care.

Over-apologizing, on the other hand, can stem from a myriad of formative childhood experiences. For some, over-apologizing is a way to avoid conflict, especially if they grew up in a household where conflict sparked screaming matches, or led to violence. It can also stem from a fear of abandonment. In terms of understanding the history behind one struggling to “avoid conflict at all costs,” Panthea Saidipour, a psychotherapist, noted that if one has witnessed conflicts being meted out with being iced out and given the cold shoulder, which for a kid can “feel tantamount to being abandoned,” one steers clear of situations that could spiral the same way by over-apologizing. “[Apologizing] for having any needs at all,” can stem from being raised by a parent, who “had a low tolerance or even contempt for your needs,” Saidipour added. This can also result in endeavors to constantly please people, and be perceived as a “good person,” since apologies “minimize the negative repercussions of the incident and repair the actor’s damaged identity.” As such, over-apologizing becomes an internalized coping mechanism.

India’s #MeToo Apologies Are Rolling In. Do Any Warrant Forgiveness?

But, in addition to being a coping mechanism, apologizing repeatedly can also serve as a ‘safety manoeuvre’ to keep oneself safe in abusive relationships. Also, experiencing a severely traumatic childhood, can sometimes, lead people to believe that they are the root cause of all the terrible things happening around them, even after they grow up, causing them to over-apologize. “Those who over-apologize often feel like a burden to others, as if their wants and needs are not important,” Kelly Hendricks, a couple and family therapist in San Diego, told Psych Central, explaining how the behavior might also be a result of feeling unworthy.

Further, experts believe that anxiety can also lead to over-apologizing, as a means to manage emotions of fear, nervousness, and worry. It could also be a result of the ‘spotlight effect,’ which generates extreme self-consciousness by making one believe that others are keeping close note of the minutest details of their failures. “Over-apologizing can stem from being too hard on ourselves or beating ourselves up for things,” Dr. Juliana Breines, an assistant professor of psychology at the University of Rhode Island, explained. In addition to anxiety, another mental health disorder that can lead people to over-apologize is OCD. Dr. Michael Alcee, clinical psychologist, explained that “people with OCD are often very sensitive about harming others and about exhibiting overly-assertive or aggressive thought or action,” and by apologizing excessively, they believe they’re “undoing” any harm they believe they may have caused.

And, while some people cannot stop apologizing, some simply don’t apologize. Experts believe those who refrain from apologizing as much as possible, are prone to believe that apologies will “open the floodgates to further accusations and conflict,” and at the same time, “relieve the other party of any culpability,” Dr. Guy Winch, a clinical psychologist, noted. “In order to offer a heartfelt apology, a person needs to have a solid platform of self-worth to stand on,” Harriet Lerner, psychologist and author of Why Won’t You Apologize?, told The Cut, adding that people who’ve done more harm, or are less self-aware, are constantly perched upon a “small, rickety platform of self-worth,” which makes apologizing difficult for them. Apologizing becomes a challenge for people when they have trouble separating their actions from their character, which makes accepting responsibility, or apologizing, threatening to their basic sense of self-esteem, and their identity.

Could an Apology Cause Its Recipients More Harm Than Good? Perhaps.

Also, as studies have established over the years, women apologize more than men. “In all cultures studied, men apologize less frequently than women. I think one of the greatest risks of being an under-apologizer is to be raised male, and the greatest risk of being an over-apologizer is being raised female,” Lerner notes. Among other factors, researchers believe it is also a result of: first, men having a higher threshold for what constitutes offensive behavior, and therefore, requires an apology; and second, women caring more about how their actions emotionally affect people around them, which leads them to have a lower threshold for what requires an apology. And, that develops because, “girls are more often rewarded for focusing on others’ feelings while boys are more often rewarded for asserting themselves,” Dr. Stephen P. Hinshaw, psychologist, said.

Irrespective of whether one is a an over-apologizer, an under-apologizer, or simply, an individual who apologizes a regular amount, it’s important to remember that apologies are not only powerful, but also key to preserving our relationships with people we love. Apologies generate empathy. “Apology has the ability to disarm others of their anger and to prevent further misunderstandings. While an apology cannot undo harmful past actions, if done sincerely and effectively, it can undo the negative effects of those actions,” Beverly Engel, a psychotherapist and author of The Power of Apology, wrote in Psychology Today.

anxiety | apology | Childhood | narcissism | science of us | Sorry Not Sorry