Why We Look for Love in the Winter 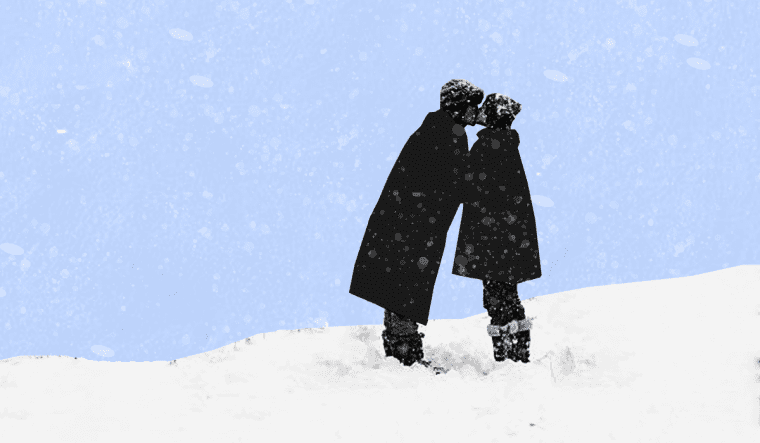 There’s a lot of things to love about Love, Actually. One, that it summarizes our lives when Sam, played by Thomas Sangster, says, “Let’s get the shit kicked out of us by love!” A lot of things bring the 10 storylines together; chief among them: the winter.

It’s not like romance blooms only under the mistletoe; but there’s something about winters, shorter days, and having to stay in and cozy that sparks love. Think The Holiday, with Cameron Diaz and Kate Winslet swapping homes and finding love (and gumption). Or, Last Christmas, with the mysterious and handsome Henry Golding. Or, a score of holiday movies that use the pull of winters to orchestrate romance. (Hallmark rom-coms, anyone?)

Turns out, there is a link between winters and a greater desire for coupling. It’s what has come to be known as the “cuffing season,” where people may be inclined to start a relationship at the start of winter — and stay in it at least until spring. The prevalence is such that the term was shortlisted in 2017 as the word of the year; even Google searches for the phrase tend to peak between October and February. Facebook’s data shows people change their relationship status around holidays like Christmas Eve and Valentine’s Day more than on other dates.

Coupling is biological, ideological, and social. The formula for what makes winters such a fertile period for romance is such: darker days + colder nights + holiday season + societal pressure = an intoxicating cocktail.

Physically, it’s telling of how seasons impact our psychology. Studies show that individual serotonin levels (hormones that regulate our mood) decrease when there’s a drop in sunlight. This is what we know as “winter blues.” It’s the increased anxiety and loneliness that can impact a desire for relationships. No wonder researchers found a direct relationship between feeling cold and watching romantic movies. Viewers may associate romance with warm, mushy feelings — activating a psychological warmth that spills over the body. Winter terminology like “snuggles” and “cuddles” accelerates this process, further associating warmth with romance.

Springtime Can Mean Increased Anxiety, Depression for Some People

There’s some research about laws of attraction bending during winter. Heterosexual men, for example, find women’s bodies more attractive in winter than summer due to a “contrast effect.” If people in swimwear or shorts were the norm in summers, fully clothed individuals wrapped in mufflers may lend themselves to more appeal. Just like how on the eve of winters people fantasize about bulky sweaters and boots.

Perhaps, the most obvious desire to couple up is because of social pressure. “There can be pressures we feel from family, friends and our environment to be coupled up, but I also think that this pressure we feel is subconscious,” Katherine M. Hertlein, a professor in couples and family therapy at the University of Nevada, told BBC Future. “From what I’ve seen, there are some people who don’t want to end a relationship around this time of year either. I see people stay in relationships for the sake of not rocking the boat or ending up alone during this time.” A 2013 study found an increase in searches related to online dating and dating apps in the winter months.

It can cause a “what the hell” effect, where setbacks cause people to retreat but also try harder in relationships because “what the hell… why not see things through.” Because cuffing season overlaps with a series of social events and festivities, most people silently yearn to have a +1 to tide through gatherings. Sally Baker, a relationship therapist in London, cites this as the reason why people may also rekindle old romantic relationships.

The loneliness is also exacerbated given “the cultural messages that bombard us about togetherness, commitment, love… And what used to feel fun and adventurous during the summer– meeting many people, going on the town with multiple dates one after the other– is no longer as possible or as appealing,” Psychology Today points out.

It is around winters that people tend to reevaluate life choices. Say, it’s New Year’s eve and someone’s wondering how the year went by and the resolution is still fully encased in its shell. It ushers in an existential reckoning. “At our core, we’re living this evolutionary pattern to get together, form a pack, and stay alive,” Hertlein said. “But at the same time, we’re getting bombarded by this idea that being alone during winter is not how you should be experiencing this time of year.”

We’re on the edge of winter too, here in India. Here’s how a writer described North Indian winters “[they were] synonymous with the softest quilts, the Sunday staple brunch of chhole bhature, polished off with piping hot, melt-in-your-mouth gajrela, followed with a ton of crispy moongfali, and of course, the instant gratification of wrapping hands around a cup of chai.” After the year we’ve had, what’s wrong with having a little winter romance? (Not you, Bombay).