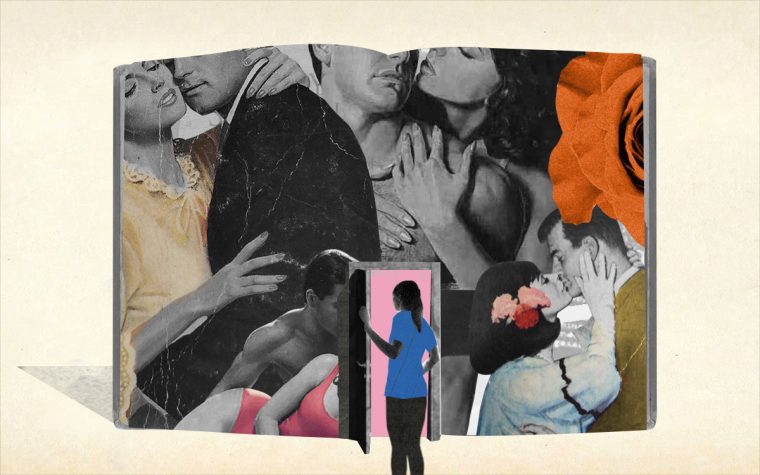 “[I]f sex includes some of the most exhilarating, passionate, and devastating experiences in a person’s life, shouldn’t sex education address exhilaration, passion, and devastation?” Jen Gilbert, a professor at York University in Canada, who focuses on sexuality education, youth studies, and LGBTQ+ issues in education, wrote in a 2004 paper. “[Yet] sex education does not stray far from the sterile presentation of facts or moralistic admonitions to say no. Where, then, might sexuality find an education in the affective? Where might youth, and adults for that matter, speculate on the complicated relations between sexuality in all its guises and the passions?” Gilbert goes on to ask.

Her answer: novels. “[A]n engagement with novels might offer not only a curriculum to engage the concerns of youth, but also a method for reading youth cultures [and] address[ing] the complications of love and identity,” she wrote.

Literature, in fact, made Anahita feel more comfortable about the idea of a non-hairless female body – especially with the idea of women not “needing to shave” their pubic hair. This was a result of her reading a book that referred to a woman’s pubic hair as the “thick dark curls of womanhood.” It made her think, “Oh, so you can just leave it there!” She says she was exposed to it in her adolescence, at a point when she was beginning to explore the norms around the wat our bodies present. Unlike contemporary, mainstream pop culture at the time – like Sex And The City, for instance, which put forth quite the opposite notion – the novel opened Anahita’s mind to the idea that pubic hair isn’t “shameful.”

Books have helped many women recognize and come to terms with their desire too. Dhvani, 29, for instance, credits works of fiction for giving her insights into how a sexual relationship plays out. She says it felt like “the safest, if not the most accurate, source… [The books] gave me privacy [to absorb its contents], and time to think about how I felt about the things I read.”

She mentions that despite being a student of biology and knowing the basics, “the books helped when I had my first sexual experience… They had painted a very pretty, happy, and satisfying picture of sex, so I was a little disappointed with how my ‘first time’ went. But the books also gave me the courage to keep trying to have better experiences, and to initiate conversations [about sex] with my friends, and with my partner,” she explains. Basically, literature enabled her to work towards a richer, more fulfilling sex life.

Books also exposed people to parts of sexual intimacy – like foreplay for Anahita – that can serve to make their first-hand sexual experiences better for years to come. Anahita also recalls that in a lot of the books she read, “women were at the receiving, or learning end – like the men would often be more experienced, and taking her through it.” This also taught her about how “different things feel like and stuff.” It, perhaps, reflects the male gaze that leans towards portraying “respectable” female characters as sexually innocent creatures — perhaps, virgins even. But, ironically, it served the purpose of enlighening their readers — including women, of course — about sex.

Besides providing insights into how intercourse plays out, literature can, through stories, also lend young readers context about the socio-political discourse around sex – be it through explorations of consent, commitment, safety, or, simply, emotions.

According to 3.5 Million Books, Women Are Beautiful and Men Are Rational

A., 28, too, speaks of absorbing toxic ideas through literature — primarily, Mills and Boons and Harlequin romances that she stumbled upon in her mother’s cupboard. “They were pushed very heavily on the gender roles of your ‘alpha male’ and your ‘damsel in distress’… The sex, in some cases, was even a bit ‘rape-y,’ in hindsight… And it kind of drilled into me that sex is just that — a penis going in a vagina,” she says.

Unlike Anahita, for some women, relying on literature for knowledge about sex, also led to them feeling less confident about their bodies. “[Books] made me doubt my desirability owing to stretch marks, and not having ‘smooth’ and ‘white’ skin,” Khushi notes.

However, this is not to say that learning about sexual relationships through literature is a terrible thing. It is in the absence of proper sex education that notions they propagate might be harmful – just like with porn. “It took me an incredible amount of time to come to terms with that fact that I can just enjoy sex without having to be in a relationship… If I had comprehensive sex education to teach me instead, I would’ve taken the literature with a pinch of salt and used it only as something that would enhance my imagination and if anything give me more ideas for the bedroom,” Rhea adds.

Thus, despite its pitfalls, literature has helped many women recognize and come to terms with their desire. In a better — if not “ideal” — world, literature can potentially even serve as a helpful tool to make sex education more robust.