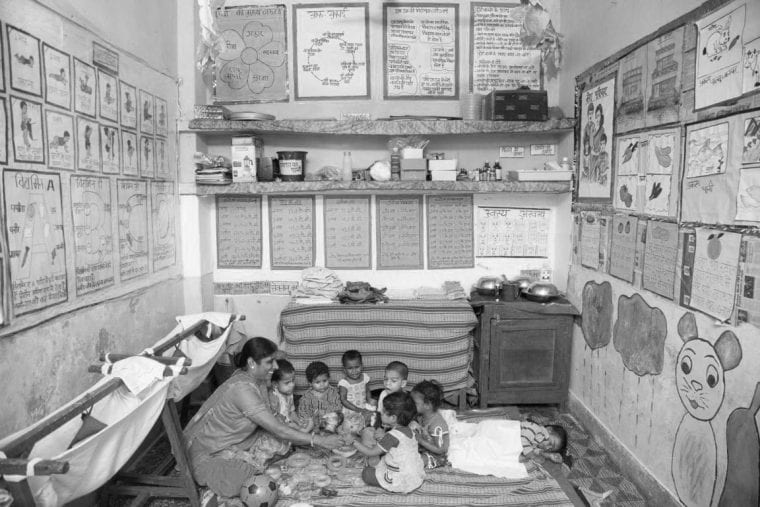 In recent years, the Indian government has encouraged women’s participation in the workforce, in lip service as well as in legislation such as the Maternity Benefits Act, which in addition to ensuring maternity leave for women in the formal workforce, also mandated access to crèches via employers.

The catch, however, is that the act fails to protect women who work in the informal sector, who outnumber women in the formal sector by far. And government child care schemes that do target these women have languished without funding.

“I don’t think I’m giving my child the attention she deserves. I think I’ll send her back to the village, like I did with my son. At least there she won’t be locked up inside the home alone all day,” says Reena, a 35-year-old woman living in the slums of Gurgaon. A domestic worker, she is part of an ever-increasing informal workforce of women who earn daily wages as laborers, domestic help, nannies, etc. Like most of her peers, there are two questions that most trouble her: how to make the next month’s rent and who will take care of her kids while she’s out doing so.

“I’m jealous of my madam,” admits Shanti, who has worked as a nanny in an affluent neighborhood of Delhi. “She used to leave her children with me. I cooked and cleaned for them, took the children down for playing and ensured they ate, did not cry and were happy and looked after. However, once I had my child, I had to leave all of that and pick up odd jobs cleaning other people’s homes.”

Shanti’s story is not unique, nor unheard of. A survey of day laborers conducted in 2011 by the Ministry of Women and Child Development (MWCD) found that up to 87 percent of respondents said it was difficult to work and take care of children due to time pressures and work distractions. Their children often remained unsafe and neglected, they said.

Sadly, almost eight years after this needs assessment, little has changed. In response to the survey, the government launched in 2012 an attempt to turn existing anganwadis into anganwadi-cum-crèches. The aim was to convert 5 percent of total anganwadis over the five year period from 2012 to 2017. And in 2013, the MWCD revised and implemented the Rajiv Gandhi National Crèche Scheme (RGNCS), which promised to provide quality daycare facilities to children, up to age 6, of working mothers whose monthly household income was less than Rs. 12,000. Under the scheme, the ministry would provide 90 percent of the required funds, and the balance of 10 percent would be provided by the NGOs running the crèches. On paper, the scheme was well thought out, detailed and poised to be successful.

However, as per reports by The Economic Times, by 2016, only 22,000 créches were made available, which failed to serve the 3.5 crore children who would qualify. The scheme only managed to fulfill 0.015 percent of the need.

Then, in November 2017, the Centre announced a change to the National Crèche Scheme’s funding structure: Instead of the 90:10 ratio of contributions that came from the government and NGOs respectively, the Centre would now only contribute 60 percent of total funding, leaving the state governments to fulfill 30 percent, while NGOs, which tend to be the main crèche operators, were still expected to contribute 10 percent of the running costs.

To add to the blow, the MWCD stopped registering new créches under the scheme. As a result, an estimated 8,143 crèches have closed between 2013-14 and 2016-17, and the number of women and children benefiting from the scheme has been cut by 39 percent. No data regarding the anganwadi-to-crèche conversion over the same period is publicly available, making it harder to determine its success.

Now, with only 7,316 operational crèches, most states are looking the other way, leaving the RGNCS programme in a lurch.

It also leaves women and the Indian economy in a lurch. Raising a child in India is almost exclusively seen as an activity to be carried out by women, limiting their ability to work. In the government’s 2011 needs assessment, more than 90 percent of female respondents across each state expressed interest in working if crèche facilities were available. Another, more recent study of the low proportion of women in the workforce, found almost 30 percent of respondents attributed the lack of childcare policies and avenues as a barrier to them joining the workforce.

If this changes, and women are able to participate in the workforce equally to men, the world could add up to US$28 trillion to global GDPby 2025. India’s GDP stands to gain US$ 770 billion by 2025, if gender parity is achieved.

Parenthood Sets Women, But Not Men, on a Path of Lower Lifetime Earnings

Is it time to perhaps go private?

The money set aside for the Child Protection Services program under the Integrated Child Development Services was increased to Rs 1,500 crore from Rs 925 crore in the 2019 interim budget. But many working in the sector fear that the move is just for show. Most organizations working in the field have complained about grants not coming through and lack of communication from the ministry, despite the budget increase and more frequent, public announcements of support.

While there’s no tender out yet for private organisations to bid for the operation of the scheme, those working in the sector fear it may not be far off.

Such privatization would raise costs, curbing the impact of child care on women’s lives, the labor force, and the economy. Most NGOs lack the resources and funding to provide affordable quality services, hence the subsidies under the Rajiv Gandhi National Crèche Scheme (RGNCS). While companies have more resources and bigger bank balances than NGOs, their motivation is maximizing profit – which necessitates keeping down costs.

This would likely mean cuts to the quality of the program – essentially gutting its purpose and benefit to women like Shanti. Research has highlighted the perils of profit-driven companies taking charge of welfare programmes: While some private players do expand these programs’ reach, the trade-off is in the difficulty of holding these businesses accountable and making sure they don’t put children at risk.

“It not only reduced my income, but is a lot more inconvenient for me, too,” Shanti said of the trade-off between caring for her family and her employment. “But it helps that I can come home to my daughter when she’s not napping. My husband and I have divided our day like this to ensure someone is always there with her. We can’t hire a nanny, so what else can we do?”

Correction: An earlier version of this article incorrectly stated the economic effect of gender parity in the workforce. Gender parity could add up to US$28 trillion to global GDP, not to India’s GDP, by 2025. Yashasvini Mathur is an independent journalist, writing on politics, gender, education, technology and the intersections between them. She has previously written for ThePrint, Youth Ki Awaaz, and The Wire, among other publications. Yashasvini tweets at @yashasvini_m.
See all articles by Yashasvini