Why People ‘Sigh’ – And Why Others Find It Annoying 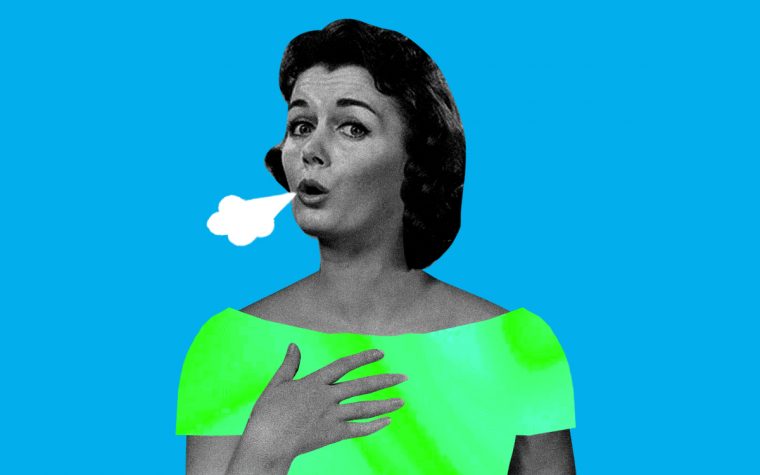 Sometimes, emotions come with a sound. The most versatile and intuitive among them is the sigh: it is vocal every now and then, conveying inexplicable fatigue. Some might sigh at the prospect of 50 open tabs sitting in front of them. Other times, the sigh abandons all letters, and exists simply as breath exhaled loudly and quickly. Maybe a sigh at the promise of a long weekend.

The sigh is an utterance rich in meaning. There’s also some value to be found in it; we sigh not only as the direct climax of emotions, but also because the physical body sees it as an involuntary action that aids lung function.

A sigh can be a “fundamental life-sustaining reflex,” according to a 2016 study published in Nature. The researchers traced the root of sighs back to the nerve cells in the brain’s stem region, which are responsible for regulating our sleep, heart rate, and breathing. “Sighing appears to be regulated by the fewest numbers of neurons we have seen linked to fundamental human behavior,” said Jack Feldman, a neurobiologist at University College Los Angeles and one of the authors of the study.

This breathing center controls the type of breath we take too. “It’s made up of small numbers of different kinds of neurons. Each functions like a button that turns on a different type of breath. One button programs regular breaths, another sighs, and the others could be for yawns, sniffs, coughs, and maybe even laughs and cries,” said one of the researchers, Mark Krasnow, from the Stanford University School of Medicine. Since a sigh is essentially an extra breath, it helps to preserve lung function. ScienceAlert described this neural system as a “sigh” button in the human body.

In other words, there are clusters of neurons in the brain stem that turn normal breaths into sighs, picking up on when the lungs need some extra help. And humans are programmed to sigh a lot (roughly a dozen times in an hour), irrespective of what they may be thinking about. An unread mail, a plan canceled, a piece of good news — a sigh rises indiscriminately to each prospect.

Sighing also shares a rewarding relationship with relief. Science so far has agreed on the premise of “sigh of relief”; there is a sense of catharsis, of repose, that comes with a sigh too. An experiment on rats found their sighing increased when they stop receiving electric shocks. Similarly, human participants in a study were subjected to loud and stressful noise continuously; when the auditory onslaught stopped, they sighed more.

Interestingly, sighs could lead to relief too; in that it could be a tangible way to trigger feelings of emotional and physiological relief, reflecting the idea that it serves as a physical and mental reset of sorts. In a 2016 study, participants were asked to take deep breaths after flipping through disturbing images. Those who sighed intermittently felt a certain relief, in that their physiological tension was reduced, more in comparison to people who held their breaths in.

Of course, there’s something such as too much sighing too. “…when people sigh excessively, they risk hyperventilating, and thus having chronically low levels of carbon dioxide in the body. This state of ‘hypocapnia’ causes widespread symptoms in the body, such as lightheadedness, palpitations, feelings of anxiety, breathlessness, and pain,” noted Elke Vlemincx, an assistant professor of health sciences in the Netherlands. A sigh promises short-term relief — a reflex to cope with tumult, perhaps — but chasing sighing as a way of recovery ends up doing more damage in the long term.

But all said and done, a sigh doesn’t always translate well. Research more than one has suggested that people who listen to a sigh associate the sound with a negative mood — chiefly defeat, disappointment, boredom, frustration, and longing. Take this passage from In Much Ado About Nothing, women here are sighing over frustration with men’s infidelity.

Arguably, sighs don’t always translate well. In 2000, American politician Al Gore made the fatal mistake of sighing too much at a presidential debate. His loud and histrionic sigh set off a discussion about why he was sighing so much; political pundits rushed to look at his history of sighing in the last 10 years. One expert despondently counted that there were 18 sighs in a single debate. People were annoyed because it portrayed Gore as childish and whimsical.

The merits of this scrutiny aside, sighing is often seen as an expression of negative feelings, and judgment is harsh on one who repeatedly airs their “negativity” by way of sounds. People, in general, are programmed to focus more on negative things and clues in life in general — which may explain why Gore’s sighs held the spotlight in the 2000 debate.

Moreover, sighs also come with a sense of superiority that makes it harder to perceive the person kindly. Imagine the sigh of a teacher, or a parent, at a badly-scored exam. The disappointment and frustration singed deep within, makes the sigh particularly grating.

The question then lingers: is the point of a sigh linked to why we do it, or how is it perceived by others?

Arguably, a sigh is a language of its own — allowing a conversation with the self to play out entirely without words. There is intrigue and mystery; an emotion, be it sadness or solace that grows until it lets out by way of a sound. In Naked Truths and Veiled Allusions, American author Minna Antrim famously remarked that the drama of life begins with a wail and ends with a sigh. A sigh can mean something and nothing all at once.